CBS’s Evil is one of TV’s wildest shows, disguised as a network procedural 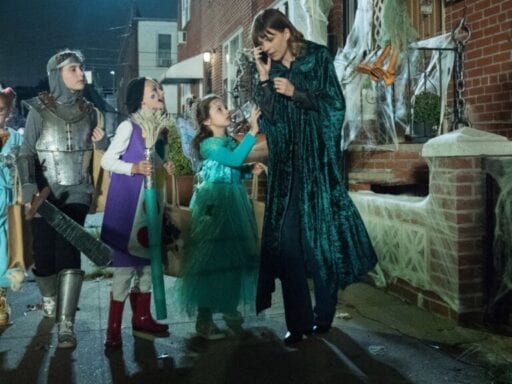 The Good Wife’s creators try to do The X-Files in this new series. It’s so fun.

Evil is one of the weirdest shows to have aired on broadcast network TV in ages.

Hailing from The Good Wife creators Robert and Michelle King, it’s an often genuine attempt to probe the nature of evil via a mainstream procedural. It’s the duo’s first project not set in the Good Wife universe since 2016’s truly strange BrainDead (a comedic semi-musical about brain-sucking aliens taking over Washington), and it’s interested in questions like: Does evil come from something broken within humanity? Does it come from something wrong with society? Or does it come from demons? The show takes all of these possible answers — and more — at least somewhat seriously.

It’s also riotously funny. In this week’s Halloween-themed episode, “October 31,” spooky monster children are mashed up with Christine Lahti singing a fake pop song about saving the bees. There’s at least a moderately sincere attempt to stage a vaguely “realistic” (whatever that adjective means) exorcism on a network TV budget (in a way that pays cheeky homage to the movie The Exorcist) while also parodying basic cable ghost hunter reality shows. And all of this happens in just one episode.

Evil was recently renewed for a second season, and I couldn’t be more thrilled. The show’s obvious comparison point is The X-Files, Fox’s long-running series about FBI agents who investigate the roots of paranormal phenomena. The X-Files was seriously scary and fond of philosophical dithering. But it also had a sense of humor, especially in its overtly comedic episodes.

Those comedic episodes were often written by the iconoclastic Darin Morgan, who took everything that made The X-Files great, turned it five degrees toward comedy, and ended up with something even greater. And in some ways, Evil feels like an attempt to make a new version of The X-Files that’s all Darin Morgan episodes. It should be too wild to work, but I have come to cherish its chaotic evil energy. I never know what’s happening, and I love the way it leaves me confused, flummoxed, and giggly.

Evil is less science fiction-oriented than either The X-Files or Fringe, which helps it stand out

Beyond its wild tonal swings, the biggest difference between Evil and The X-Files (or Fringe, The X-Files’ most successful earlier copycat) is that The X-Files was interested in science fiction above all else. It would occasionally do a ghost story or something like that, but it was far more interested in aliens and weird monsters — things you could touch. It’s best episodes tended to have a visceral feel, and its worst fates were usually physical in nature.

There’s a bit of that in Evil too — it’s hard to produce horror that doesn’t inspire at least some concern for your physical well-being — but the series is much more interested in concepts that are older than the covers of science fiction novels. Evil is centered on the thin line between psychological explanations for human suffering and religious explanations, and its core investigative duo is skeptical psychologist Kristen Bouchard (Katja Herbers) and soon-to-be priest David Acosta (Mike Colter).

Just like on The X-Files, the woman is the skeptic and the man is the believer (though on The X-Files, Dana Scully was a religious believer while Fox Mulder was an atheist, an intriguing spin on their foundational divide). But unlike on The X-Files, the impossible-seeming phenomena that Evil’s David is trying to prove are completely unprovable concepts, like demonic possession and Satan’s influence on the Earth. So the dynamic between him and Kristen is less “skeptic versus believer” and more of a serious dialectic on what evil even is: Is it scarier to imagine it as the product of minds twisted in horrible directions or as an outside force that visits itself upon us and makes us do its bidding?

Evil complicates the simple “skeptic/believer” dynamic in other ways, too. Namely, it introduces a whole bunch of other characters who bring their own viewpoints to Kristen and David’s pairing. There’s Kristen’s mom (Lahti), a boomer with big hippie energy. There’s an “expert in the occult” who keeps trying to get people to commit acts of evil (Michael Emerson) and who is also pursuing a romantic relationship with Kristen’s mom. (This is a weird show!) There’s another skeptic named Ben (Aasif Mandvi), who helps David set up the equipment he hopes will capture evidence of something dark and evil.

There’s also a demon named George, who is probably a figment of Kristen’s imagination. But only probably.

It’s a lot for any TV show to juggle, and any given episode of Evil feels about five minutes away from collapsing under its own hubris and ambition. The TV scholar Jason Mittell has dubbed the chief storytelling mechanic of 2010s drama to be “batshit TV,” a category that contains everything from American Horror Story to The Leftovers to Legion — all shows where big, wild things happen and small, wild things happen, and the goal of the storytelling is to keep you off-kilter. Evil is perhaps the most successful series yet to filter the “batshit” sensibility for broadcast TV, and it’s airing on CBS, traditionally the most staid and artistically conservative network of them all.

Evil has all the hallmarks of a television blank check

There’s good reason for CBS to have picked up Evil: Series creators Robert and Michelle Kings have been vital to infusing the network’s reputation with some necessary prestige. The Good Wife expanded critical perception of CBS beyond just a repository of ho-hum crime dramas, and The Good Fight more or less put the CBS All Access streaming platform on the map. So when the Kings said they wanted to make a show with demons and other beasts, well, CBS was likely all too happy to give them what they wanted.

In the film world, when a director achieves a massive success early in their career, they are often handed a series of blank checks to make whatever crazy passion projects they can dream of. This rarely happens in television, where budgets are lower, ratings data push networks to interfere early and often, and a tricky or difficult idea rarely makes it past the pitch stage. The TV equivalent of a blank check is a creator convincing a network to fund a series that falls outside of its wheelhouse — like, say, CBS funding a series about demonic possession, the nature of evil, and older women singing fake pop songs about bees.

Part of the fun of Evil, then, is simply where it airs. This kind of show isn’t supposed to exist on network television in 2019. And previous episodes of the show have traveled to some seriously dark places (as in episode four, which involved questions about evil manifesting in children), while maintaining a lighthearted sense of humor about the impending end of the world.

That tone — everything is doomed, so we might as well laugh about it — is very Robert and Michelle King. But it’s not exactly CBS, a network known for heroes with steady hands and steadier jaws, who stare determinedly into the middle distance and do everything they can to make sure it will all be all right.

Truth be told, there are plenty of times when I’ve wondered whether Evil has any idea of what sort of tone it’s aiming for or whether it’s burning off plot too rapidly. The sequence in the Halloween episode in which Ben serves as the resident skeptic on a ghost-hunting reality show might have been great fuel for an entire episode, but it was instead relegated to a C-plot. And while I’m very into the sweet romance between Lahti and Emerson’s characters, it does feel a little odd, given he was introduced as a man who wants to make people be evil.

But there’s no other show on broadcast TV — and few other shows on cable — that would do something quite as weird or unhinged as endangering the lead’s kids (for Kristen has four young daughters!) by dragging them out into a cemetery, lured by a little girl posing as one of their friends by refusing to take off her Halloween mask. The episode kinda sorta gives us a story about who this strange figure might be, but we never get confirmation. We just see her walking down the street, laughing maniacally and shouting “Boo!” at people and causing them to scatter.

As long as Evil is willing to let its evils be both demons and strange little girls, I’m going to keep watching. And on the way there, if the show wants to keep throwing darts at a giant wall where someone has spray-painted, “WHAT IS EVIL?!” well, who am I to stop it?

Evil airs Thursdays at 10 pm Eastern on CBS. Previous episodes are available on CBS All Access and the network’s website.

Trump’s $92 million military parade is postponed — for now
A contested convention — and why it probably won’t happen — explained
Essential workers are losing their hazard pay even though the hazard isn’t over
The often-overlooked reasons why young people don’t vote
“He knew that the march is not over”: Read Barack Obama’s eulogy for John Lewis
The Hillary Clinton-Tulsi Gabbard feud, explained