The US is “committed” to staying in Syria — to protect oil 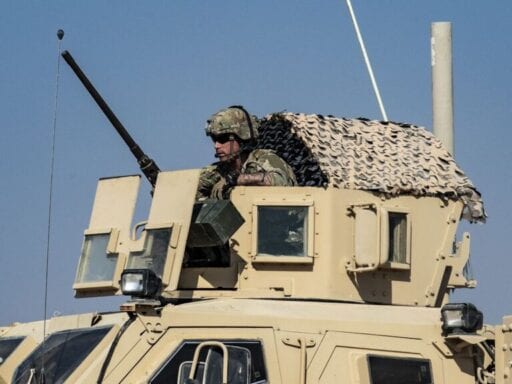 Share
Loading...
A US military vehicle takes part in joint patrol with Turkish forces in the Syrian village of al-Hashisha on the outskirts of Tal Abyad town along the border with Turkey, on October 4, 2019. | Delil Souleiman/AFP via Getty Images

Trump wanted to end “endless wars” in the Middle East. He may have just started another.

For weeks, President Donald Trump and his top aides have said the US would deliberately withdraw nearly all of its 1,000 troops from Syria to end an “endless war.” But in a stunning reversal, the administration is now “committed” to fighting a war for oil in the country.

Three US officials confirmed to me that the US mission in Syria has indeed changed. Originally, the plan was to keep US troops in northern Syria to fight an anti-ISIS mission along with the Syrian Democratic Forces (SDF), a Kurdish-led fighting group that battled the terrorists on the ground with American support. Then on October 6, the White House announced that US troops would leave the area, leaving the Kurds to fend off Turkish forces that have long wanted to kill them on its border.

And then it changed again: The White House is now weighing a plan to keep about 500 troops in Syria to keep oil fields out of ISIS’s hands, denying it a source of revenue that could help it reconstitute. It’s even possible that the US military will send tanks into the region for added firepower.

In other words, Trump is no longer serious about getting out of Syria entirely. It’s now a military mission with no end in sight.

….COMING HOME! We were supposed to be there for 30 days – That was 10 years ago. When these pundit fools who have called the Middle East wrong for 20 years ask what we are getting out of the deal, I simply say, THE OIL, AND WE ARE BRINGING OUR SOLDIERS BACK HOME, ISIS SECURED!

Despite his desire to end US military engagement abroad, Trump has been consistent on wanting US forces to keep hold of oil fields in the Middle East. Sure enough, keeping troops in Syria to defend the oil looks like administration policy now.

“The United States will continue the vital mission of assisting our SDF partners in securing oil fields in northeast Syria once occupied and used by ISIS to generate revenue,” a senior administration official told me. However, the official wouldn’t divulge troop numbers, movements or the positioning of American assets.

“The US is committed to reinforcing our position, in coordination with our SDF partners, in northeast Syria with additional military assets to prevent those oil fields from falling back to into the hands of ISIS or other destabilizing actors,” a US defense official confirmed.

The White House hasn’t said anything official yet. But on Friday morning, Defense Secretary Mark Esper told reporters that some troops would stay in Syria to keep oil fields out of ISIS control. He said the deployment “would include some mechanized forces” — which might be a confirmation of sending tanks into the area — but the Pentagon boss insists the overall drawdown will continue.

This is jaw-dropping. Trump campaigned on getting the US out of Middle Eastern wars, and he has spoken passionately and often about bringing troops home from Syria. As recently as Wednesday, Trump gave a lengthy speech on his withdrawal decision, saying it was time “someone else fight over this long bloodstained sand.”

Chalk that up to another Trump lie, because it looks like that “someone else” is the United States.

“This is a puzzling step” for Trump to take in Syria

Experts I spoke to about the new Syria policy were dumbfounded by the whiplash-inducing change.

“This is a puzzling step, even for this administration,” Michael Hanna, a Middle East security expert at the Century Foundation in New York, told me. “It seems a desperate last-ditch attempt” to perhaps combat Iran in Syria as well as keep ISIS down, he continued, noting that “on its own terms, this makes no real sense.”

It’s true that ISIS uses oil revenue to fund its terror operations, so ensuring the group doesn’t get cash from selling it will make any comeback more difficult. But ISIS can gain strength in other ways, including using the chaos unleashed by the Turkey-led war in northern Syria to recruit new members and bust ISIS detainees out of makeshift prisons in the area.

Securing the oil fields may, therefore, be a good step to take, but it’s only one of many. It’s completely possible that ISIS will grow in numbers and eventually surround a small American fighting force that will have to fight terrorists to keep the oil away from them. In a sense, this policy may put US troops in more danger down the line.

“Suddenly and solely focusing on oil fields, and subsequent revenue, falling into the hands of malignant actors in Syria is substantively mistaken and misguided,” says Mara Karlin, a Middle East security expert and a former top Pentagon official for strategy and force development.

The other troubling aspect is that there is no indication whatsoever as to when the new US mission in Syria might end, which means Trump just initiated another endless war in the Middle East. What’s more, Congress hasn’t approved the plan, which bothers the experts I spoke to. “This move would lack legality and present huge questions of sustainability,” Hanna said.

But that seemingly doesn’t matter to Trump, as he has now completed his second reversal of a Syria withdrawal in 10 months. Last December, he said all 2,000 US troops would leave the country, only to keep 1,000 there to continue fighting ISIS after officials convinced him to do so. This time it appears briefings with retired Army Gen. Jack Keane, a regular Fox News contributor, and Senate ally Lindsey Graham did the trick — and all it took was a map.

“Keane displayed a map showing that almost three-quarters of Syria’s oil fields are in the parts of the country where US troops are deployed,” NBC News reported earlier this week about an October 14 briefing. “Graham and Keane told the president that Iran is preparing to move toward the oil fields and could seize the air space above them once the US leaves.”

After attending a White House Situation Room briefing with military leaders on Thursday about Syria plans, Graham told reporters that a “plan [is] coming together from the joint chiefs that I think may work, that may give us what we need to prevent ISIS from coming back — Iran taking the oil, ISIS taking the oil.”

Graham, it seems, got what he wanted. The question now is if Trump can stomach being responsible for another interminable deployment in the Middle East.

11 legal experts agree: There’s no good reason for DOJ to drop the Michael Flynn case
At court deadline, more than half of separated migrant families have been reunited
Netflix’s Conversations with a Killer willfully participates in Ted Bundy’s 3-ring circus
Democrats are campaigning in poetry again
What we know about House Democrats’ formal impeachment inquiry
Netanyahu has failed to form a government, sending Israelis back to the voting booth