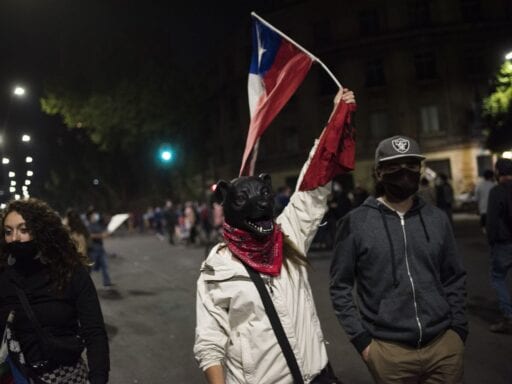 Share
Loading...
Demonstrators supporting the reform of the Chilean constitution celebrate while waiting for the referendum official results at Plaza Italia Square, in Santiago, Chile, on October 25, 2020. | Alejandro Olivares/Anadolu Agency via Getty Images

The years-long push for a new Chilean constitution, explained.

When metro fares in Chile’s capital rose last year, few expected the decision would end with the fall of the country’s dictator-era constitution — setting the country on a politically treacherous but transformational effort to create a better society.

On Sunday, 78 percent of Chileans voted in a plebiscite to replace the current charter written by Gen. Augusto Pinochet, the far-right autocrat who ruled from 1973 to 1990. Starting in April, a 155-member constitutional assembly — which must feature an equal number of men and women elected by the public — will draft it by early 2022. When they’re finished, the entire population of the South American country must vote to approve or reject the new document.

It’s a dramatic step, but one thousands of Chileans have demanded for years, and especially in recent months.

Last October, large-scale protests broke out over a 4-cent metro-fare hike in the capital, Santiago, which quickly became a symbol of how the nation’s political elite were out of touch with the needs of everyday Chileans. About a quarter of the country’s wealth goes to just 1 percent of the population, leaving much of the nation drowning in debt. As a result, even a small spike in the cost of public transportation imposed economic hardship on millions.

That pain was basically enshrined in Pinochet’s constitution. His regime made the neoliberal, free market economic model the law of the land, leading to, among other things, the privatization of education, health care, and pensions. Those policies (and then later, democratization) helped the country become one of the most prosperous and stable in the region.

But politicians on the left and right failed to address the rampant inequality those same policies also produced.

That’s why much of the country began calling for a wholesale change to the constitution: If the nation’s political leaders wouldn’t completely scrap the laws written by a dictator, then the public would take matters into its own hands. “This is a huge victory, and the young people who led this made history,” said Jennifer Pribble, an expert on Chilean politics at the University of Richmond.

The win didn’t come without a cost: 36 people were killed and hundreds were wounded, tortured, or sexually assaulted by Chilean police during months of protests.

Now the hardest part begins. Creating a whole new constitution is more challenging than ripping one apart, as is getting most of the country’s buy-in for it. It’s therefore possible the promise of the moment gives way to the realities of governance and politicking.

Promise, though, is better than nothing. “This is an opportunity to engage holistically in the kind of political and social agenda that clearly 78 percent of Chileans support,” Kristina Mani, chair of Latin American studies at Oberlin College, told me.

Chileans voted overwhelmingly to replace their military dictatorship-era constitution in a referendum.

About 78% had approved the option of a fresh charter to replace one drafted in 1980 under the right-wing dictator Augusto Pinochet. pic.twitter.com/ErNx2l2e17

“The constitution never had democratic legitimacy”

Pinochet’s 17-year rule was inordinately brutal. Nearly 40,000 people were wrongfully imprisoned, tortured, or killed, and more than 1,000 have been officially considered disappeared (though experts believe the real number is far higher).

In 1980, the Pinochet regime wrote the nation’s constitution and rigged the plebiscite to have it approved. Beyond the economic laws, it gave the dictator and his cronies immense powers, now known as “authoritarian enclaves,” that persisted even into Chile’s post-1990 democratic era.

Most egregiously, the constitution gave seats to unelected senators in parliament’s upper chamber — one of which Pinochet himself occupied after stepping down from power — to hinder popular representation and give the regime more control over the political process.

As the country moved on from its autocratic past — ironically, a 1988 referendum led to Pinochet’s downfall — Chilean leaders made 42 amendments to the constitution. For example, in 2005, those Pinochet-granted seats, numbering 10 at the time, were abolished from the parliament’s upper house, leaving it with 38 elected members. The reforms also stripped the military of its unchecked authority, finally placing Chile’s armed forces under the direct command of the president.

Despite those and other efforts, two things still angered the public about the nation’s constitution.

First, the simple fact that it was mostly written by a dictator made it an extremely unpopular charter. “The constitution never had democratic legitimacy,” Richmond’s Pribble told me. “That was always the Achilles’ heel of the document.”

Second, the constitution just didn’t work for everyday citizens. Its free market model drove down poverty from 31 percent in 2000 to 6.4 percent in 2017, according to the World Bank, and made the copper-rich Andean nation the highest-ranked country in Latin America on the United Nations Human Development Index. But beneath the surface lay a murkier picture.

A recent study by the Santiago-based think tank Fundación SOL showed that 50 percent of Chilean workers earned less than 400,000 pesos per month (roughly $550), making a small change — like to the cost of public transportation — a plausible breaking point.

Amalia Gómez, a 66-year-old who had to find a job to augment her measly $125-a-month pension, asked the New York Times on Sunday why her government couldn’t provide her with a better life. “Why not, if we are a country rich in minerals, fish, agriculture?” she said. “Why can’t we use those resources to our benefit, for our education and health?”

The reason, experts told me, is the constitution itself.

Simply put, it’s extremely hard for Chilean politicians to reform those sectors because the laws governing them are in the national charter. Any changes would require a supermajority in parliament to pass, which is tricky given political divisions in the body. Plus, just like in the US, any considered alteration to a nation’s constitution becomes a fraught and contentious battle few leaders want to spend political capital on.

Which explains why Chile has seen protest movement after protest movement for about two decades. Some of them, namely the student demonstrations of 2011, shook the political class to its core, making them realize the public was extremely unhappy with the status quo. A national conversation grew around updating not just constitutional laws but rewriting the charter altogether.

Hearing those calls, Chile’s last president, the left-wing Michelle Bachelet, promised to do just that — but she couldn’t get her more liberal constitution passed. When the right-wing billionaire Sebastián Piñera came to power in 2018, he said a new constitution wasn’t even on the table.

But his views changed with the protests over the metro fare hike that began on October 18, 2019. Despite his government’s deadly crackdown on mostly peaceful protests, demonstrations continued and morphed into a campaign for economic and social equality. In other words, the creation of a society only a new Chilean constitution could provide.

The dogged persistence forced Piñera’s hand. “Politically, he was devastated by the demonstrations. They were a plebiscite on his tenure in office,” Oberlin’s Mani told me. That November, Piñera said he supported a new constitution. His government initially set up the referendum for April, but the Covid-19 pandemic pushed the vote back to this month.

Now that a rewritten charter received a resounding mandate on Sunday, Piñera has struck a different tone. “Until now, the Constitution has divided us,” he said in a Sunday address from the presidential palace. “As of today, we should all cooperate to make the new Constitution become one home for all of us.”

Experts I spoke to said Chile’s president may not be happy about the situation, but he’s potentially happy about how he’ll be viewed. “This is Pinera’s clever move to go down in history as the leader who presided over a popular shift in Chile, its next step,” Mani said.

What that next step will be, though, is what will roil Chilean politics for the next few years.

The road to a new Chilean constitution is long and bumpy

Defining the rules for how a country should run is hard enough. Add political complications and the whole process becomes near impossible.

Take just three of the main concerns experts mentioned to me.

First, 155 seats in the constitutional assembly are up for grabs. That means there will be hundreds of Chileans campaigning to represent their districts, each potentially making promises to win votes that they may not be able to keep. Intense and intractable debates may dominate discussions, thereby hindering any kind of process.

That’s problematic, of course. Once delegates meet in April, they will have nine months to draft the new constitution, with the option of a one-time three-month extension. Time, clearly, will be short.

Then there’s the fact that the drafting of the new charter will coincide with next year’s presidential elections in the country. The debates the presidential candidates have could potentially influence constitutional discussions and animate partisan passions. As a result, reasoned, forward-looking discussions might give way to more parochial, short-term concerns.

This worry speaks to the heart of the debate. Chile’s current constitution, unlike others in Latin America, doesn’t codify things like social rights, women’s rights, Indigenous rights, water rights, and more. The public’s hope is that the new document will reflect local and regional needs, as well as provide for a more inclusive society.

“This is going to be a contentious process,” said Pribble. “Young voters are looking for a lot of specific guarantees and rights in this constitution.”

Should political cleavages form over exactly how to provide those rights, the result might be more of a compromise than activists want. And if that’s the case, the public could reject the new document in the 2022 vote.

Third, and relatedly, only half the nation voted in Sunday’s referendum, the highest turnout for a national vote in about a decade but still low when considering the stakes. Convincing 50 percent of the public to back a whole new charter — one they didn’t personally vote for — could prove difficult.

Experts don’t minimize the complications, and note that there could be many stumbles on the road ahead. But even so, it’s a path Chileans have long hoped to travel. “It’s important to have a re-legitimation of the system,” said Oberlin’s Mani.

Hurricane Florence caused up to $22 billion in damages. Climate change made the storm worse.
Joe Biden keeps on winning
New York City cracks down on Uber and other ride-hailing apps
Silly songs, dances, and skits: The world is using humor to curb coronavirus’s spread
House Democrats’ new plan for a $15 minimum wage, explained
Atlanta police shot and killed a 27-year-old black man outside a Wendy’s drive-through