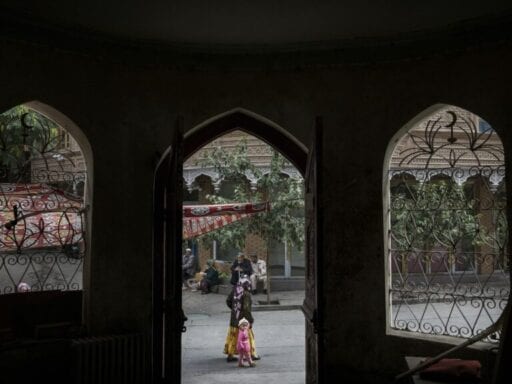 Authorities once denied there were detaining the minority group. A change in a law suggests otherwise.

A regional government in China has officially admitted that it is using “reeducation camps” to indoctrinate Uighurs, a Muslim minority group that’s the ongoing target of a brutal government crackdown.

The BBC reports that Chinese authorities in Xinjiang, an autonomous region in northwestern China where most Uighurs live, has revised a law designed to promote the use of detention centers “to carry out the educational transformation of those affected by extremism.”

China has previously tried to deny or downplay the existence of these “reeducation centers.” But human rights groups, witness testimony, and media reports have shown Uighurs and other Muslim minorities in the region are being detained in mass numbers and forced to undergo psychological indoctrination — like studying communist propaganda and giving thanks to Chinese President Xi Jinping.

There have also been reports of waterboarding and other forms of torture used in the camps. A UN human rights panel now estimates that Chinese authorities have imprisoned as many as 1 million Uighurs.

China’s new law is intended to target religious “extremism.” Uighur separatists have staged attacks in China, and Uighur fighters have been associated with jihadist groups such as al-Qaeda and ISIS. But that’s used as a broad cover to justify the detainment and expansive surveillance of an entire minority group.

These reports come as US lawmakers are amping up the pressure on China over its campaign of “state-sponsored repression.”

Sen. Marco Rubio (R-FL) and Rep. Chris Smith (R-NJ), chair and co-chair of the Congressional Executive Committee on China, detailed some of China’s human rights abuses at a press conference Wednesday, ahead of a release of a new report on the situation in China. The committee has proposed bipartisan legislation to call on the Trump administration to push China to close these “reeducation” camps.

“These are detention camps, these are reeducation camps, where people are killed, where they are tortured and they are brutalized in so many, many ways,” Smith said during a press conference Wednesday.

A brief overview of the crackdown against the Uighurs

Xinjiang, where about 10 million Uighurs and some other Muslim minorities live, is an autonomous region in China’s northwest that borders Kazakhstan, Kyrgyzstan, and Mongolia. Once situated along the ancient Silk Road trading route, Xinjiang is also a major logistics hub of Beijing’s ambitious Belt and Road Initiative.

China has increasingly tried to draw Xinjiang into its orbit, starting with a crackdown in 2009 following riots in the region. That led to the implementation of repressive policies in 2016 and 2017 that have curbed religious freedom and increased surveillance of the Uighurs, often under the increasingly hollow guise of combating terrorism and extremism.

“Reeducation camps” are perhaps the most sinister pillar of China’s de-extremification policy. Misinformation on the part of the Chinese government makes it difficult to find out what’s really going on, but leaked documents and firsthand accounts from people detained at the camps have helped paint a disturbing picture of what amounts to modern-day concentration camps. Detainees are reportedly subjected to bizarre exercises aimed at “brainwashing” them as well as physical torture and deprivation.

So-called “extremist” behavior that could lead to detention, according to the BBC, can include refusing to watch state TV or preventing children from receiving state education.

Chinese authorities are also trying to stop the spread of “halal” items — meaning it’s prepared in accordance with Islamic law — such as food and toothpaste, because they “blur” the boundary between religious and secular life, reports the Guardian. Chinese authorities have said halal products are promoting extremism.

Each of these policies is part of the creeping repression in Xinjiang province against the Uighurs. The government has taken such dramatic measures as banning of certain Muslim names for babies or barring long beards and veils.

Lawmakers, such as Rubio, have pushed for the Trump administration to consider sanctions against some Chinese officials who are responsible for human-rights abuses. They’ve also asked the Commerce Department to limit the sales of technology to China, which the government uses to surveil and repress Uighurs.

Secretary of State Mike Pompeo has condemned the treatment of the Uighurs, but so far the Trump administration hasn’t acted.

Stranger Things season 3 is charming but frustrating. Here’s a spoiler-free review.
American Factory
John Kasich makes the Republican’s case for Joe Biden
5 winners and 2 losers from night 2 of the Democratic Convention
5 winners and 7 losers from a Succession that had much more embarrassment than usual
Predictions are hard, especially about the coronavirus