Why nearly 8,000 Marriott workers are striking in 8 cities 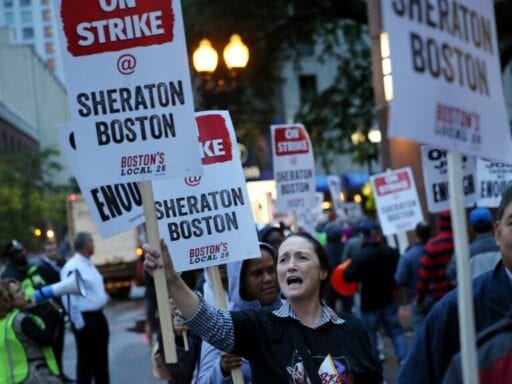 They want the world’s largest hotel company to share some of the wealth.

Thousands of hotel employees are refusing to go to work at Marriott-owned hotels in eight major US cities, citing mounting frustration over stalled negotiations for higher wages and safety measures.

As of Wednesday, nearly 8,000 housekeepers, bartenders, and other service workers had walked off the job at 23 hotels in Detroit, Boston, San Diego, San Jose, Oakland, San Francisco, Maui, and Oahu, according to their labor union, Unite Here, which represents more than 20,000 Marriott workers in the United States and Canada.

Employee tensions began to surge this summer, when labor contracts for about 12,000 Marriott workers started to expire. Employees spent the summer picketing and marching outside some of the country’s most prominent hotels, urging the world’s largest hotel company to give them more money and better benefits.

By September, negotiations with the hotel company had stalled, and workers across the country voted to authorize a strike. On Labor Day, police arrested 75 Marriott employees for blocking a street as they protested outside the Westin St. Francis hotel in San Francisco.

In recent years, Marriott International has grown into the largest and most profitable hotel chains in the world. After buying Starwood Hotels in 2016, the company now runs more than 6,500 properties, including the Ritz-Carlton, Sheraton, and Renaissance Hotels. The company is valued at about $49.4 billion, nearly double the value of Hilton, according to Forbes, and made $3.2 billion in profits in 2017 alone.

The hotel chain’s workers want a larger share of that revenue. They argue that servers’ and housekeepers’ low wages (which vary by city) make it impossible to live in some of the nation’s most expensive cities. They’re also asking the company to ease strenuous workloads that often lead to injuries, and for more protection against sexual harassment and violence.

Housekeepers and room service staff are vulnerable to sexual harassment when they enter guest rooms alone, and the union wants hotels to provide them with panic buttons that allow workers to immediately alert security staff when they feel threatened.

But union officials say that Marriott remains unwilling “to make meaningful progress on central issues,” so workers have decided to go on strike.

A spokesperson for Marriott International did not give Vox details about the status of the negotiations, but shared the following statement:

We are disappointed that Unite Here has chosen to resort to a strike at this time. During the strike our hotels are open, and we stand ready to provide excellent service to our guests. While we respect our associates’ rights to participate in this work stoppage, we also will welcome any associate who chooses to continue to work.

The Marriott strikes took off last week, when about 1,500 hotel housekeepers, bartenders, and door attendants in Boston walked off the job at seven prominent Marriott-owned hotels, including the Sheraton Boston and Westin Copley Place. Now the number of workers on strike has reached nearly 8,000 in seven other tourist destinations.

Housekeepers have been complaining that the work they do is physically taxing, and that they often have to work more than one full-time job just to afford to live in cities like Maui and San Francisco.

Mei Leung, who has been working as a housekeeper at the Sheraton Boston Hotel for more than 30 years, told the Boston Globe said that her knees are permanently bruised from decades of scrubbing toilets on her knees. The 71-year-old housekeeper said she can’t afford to retire.

Marisol Villanueva, who works as a housekeeper at the Westin Gaslamp hotel in San Diego, told the San Diego Union Tribune that the $14.25 she earns per hour is not enough to support a family.

The strikes have captured national media attention, and even the attention of some members of Congress. Rep. Joe Kennedy (D-MA) spoke to Marriott workers Wednesday morning as they picketed in Boston. “We need to make sure that the people who power this city can afford to live here,” Kennedy told the crowd.

“This begins with your efforts to make sure that the people here, and inside these buildings, and in these hotels nationwide, understand and recognize the value of the work that powers their business.” @joekennedy on our #MarriottStrike and #1job mission. Thank you! pic.twitter.com/1xcKmZbRaN

The economy is improving, but not for low-wage workers

The last time most Marriott workers negotiated a labor contract was five years ago, when the economy was still struggling to emerge from the Great Recession. Things are different now: Marriott is by far the largest hotel chain in the world in revenue, and the company had some of its highest profits last year. That doesn’t even count the windfall the company is getting this year from the Republican corporate tax cuts.

Unite Here Local 26, which represents Boston’s Marriott workers, says employees are concerned about how technology will disrupt their careers. Many hotels are considering self-check-in kiosks and robot room-service delivery, according to the Boston Globe.

Brian Lang, president of the Boston affiliate, says employees want a role in this process. They could request training to learn how to operate the new technology, or the union could help the company develop a buyout program if it decides to shrink the workforce.

“We think that they have a particular responsibility as such to set a standard that really recognizes the work of the employees who create the value that allows them to make the kind of profit that they have,” Lang told the newspaper.

How to run the world remotely
The “do what you want” theory of politics
Trump’s Nevada rally was an exercise in delegitimizing voting — and denying reality
4 winners and 4 losers from the funding bill and emergency declaration
Watch: Quarantined Italians are singing their hearts out. It's beautiful.
‘Prepared for war’: As Mueller moves to finalize obstruction report, Trump’s allies ready for politi...