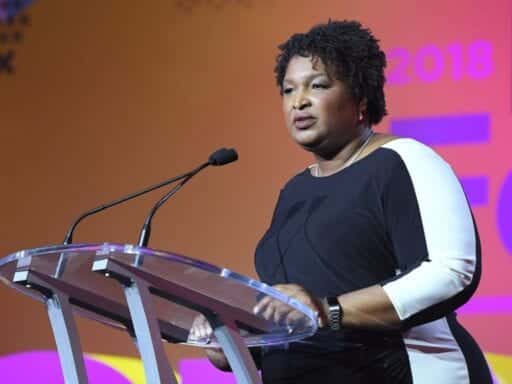 With Tuesday night’s Georgia primary results in, the stage is now set for an epic governor’s race between Stacey Abrams, the former minority leader of the state Senate running to try to be the first African-American woman elected governor of any state; and Secretary of State Brian Kemp, who successfully ran to the right of already-very-conservative Lt. Gov. Casey Cagle.

The ads with which the parties’ respective nominees sealed the deal really illustrate the difference between the two parties in profound ways.

Abrams’s ad is called “Trusted” while Kemp’s is called “Offends,” and they only diverge further from there. Abrams talks about issues, and she talks optimistically about making people’s lives better in a concrete way. Kemp, typically for a 2018 Republican, talks exclusively about diffuse threats to the white Christian cultural order.

Abrams says she has “a boundless belief in Georgia’s future,” and talks about Medicaid expansion, middle-class taxes, and mass transit.

Kemp describes himself as “a politically incorrect conservative” and literally does not mention any policy issues. Instead, he says that he says “Merry Christmas” and “God bless you,” stands for the national anthem, and supports our troops, and that if that offends you, then you shouldn’t vote for him.

Obviously there are literally no people in the United States of America who are offended by people who say “Merry Christmas” in December, but over the past 10 to 15 years, the conservative establishment in America has spun up this weird alternate reality in which totally normal, inoffensive behavior is under siege in American life and can only be protected by electing Republican politicians.

Georgia is a pretty conservative state, and Kemp is clearly the favorite to win. But Georgia is one of the states where Trump underperformed relative to historical Republicans, and with state government firmly in GOP control, the right has already implemented its most politically viable ideas. That’s what leaves you with this kind of vacuous, defensive Kemp ad versus the much more concrete and forward-looking Abrams one.

Democrats need to learn to name villains rather than vaguely decrying “division”
Democrats introduce article of impeachment against Trump
Online romance scammers stole more hearts (and money) in 2020 than 2019
House Democrats have passed nearly 400 bills. Trump and Republicans are ignoring them.
The new Alzheimer’s drug that could break Medicare
A historian on the perils of chaotic White House transitions