Trump needs his alternate reality to survive — and he knows it 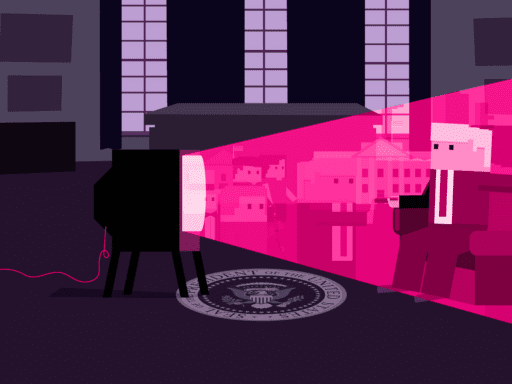 “What you’re seeing and what you’re reading is not what’s happening.”

An important part of Donald Trump’s success has been his cultivation of a base that lives in an alternate reality — a point that was driven home in the past couple of days.

On Tuesday night, the New York Times reported that Trump lashed out at his staff after seeing his wife’s television on Air Force One tuned to CNN, breaking “a rule that the White House entourage should begin each trip tuned to Fox.”

This morning, the president tweeted his dismay with the Federal Communications Commission raising concerns over the sale of Tribune Media to Sinclair Broadcasting Group — a pro-Trump local news conglomerate known for forcing its local stations to air pro-Trump propaganda. (The sale, if approved, would expand Sinclair’s reach to 72 percent of Americans, from 39 percent.)

So sad and unfair that the FCC wouldn’t approve the Sinclair Broadcast merger with Tribune. This would have been a great and much needed Conservative voice for and of the People. Liberal Fake News NBC and Comcast gets approved, much bigger, but not Sinclair. Disgraceful!

And on Tuesday, Trump told a group of veterans in Kansas City, “Don’t believe the crap you see from these people. CNN is the worst.” He added, “What you’re seeing and what you’re reading is not what’s happening.”

Sure, Trump attacks the media in virtually every public statement. (He even found a way to make his press conference with Russian President Vladimir Putin about the “fake news” media.)

But these actions show just how explicitly and actively Trump strives to maintain his preferred reality — and how he knows it’s a crucial part of his political survival.

Trump’s approval rating is historically bad. But nearly 80 percent of Republicans still approve of his job performance, and that’s thanks to a base that buys into an alternate reality largely engineered by conservative media. That media, spearheaded by Fox News, has tapped into a fundamental fact of contemporary political life: We have become more ideologically and socially sorted, and there’s great demand for content that reinforces one’s identity.

Trump intuits all this. And he knows that if he can shape reality, the floor can only be so low.

We see this alternate reality every night

Every night, Fox News paints a picture of reality that Americans outside the Fox News bubble would not recognize.

In Fox News world, the FBI is conducting a witch hunt against President Trump; the Stormy Daniels saga is part of a conspiracy to take down the president; Hillary Clinton’s corruption is still a major threat to American decency; and the mainstream media is ignoring Trump’s accomplishments, like securing the borders, lowering the unemployment rate, and withdrawing the US from bad international deals and treaties. These stories clash with the world that appears just a few channels away on mainstream media outlets like MSNBC and CNN.

We curated a list of topics that have dominated headlines in the past year and analyzed how much Fox News covered them compared with MSNBC and CNN. The data (which goes up to May) shows that the dissonance exists in virtually every prominent story.

When President Nixon faced impeachment, one thing that made it possible was that the media agreed on a certain set of facts. This is no longer the case.

Fox News and its alternate reality is by far the main source of political news for many Trump voters. (The same survey found that Clinton voters did not congregate around a single media source in the way Trump voters did.) And Trump voters who live in the Fox News reality have been shielded from the plethora of reasons Trump is embroiled in scandal. If special counsel Robert Mueller indicts Trump, it will seem unreasonable; if Trump doesn’t win reelection in 2020 by a landslide, it will seem like it’s because the FBI and mainstream media colluded to smear him.

Why does this alternate reality resonate so much with its viewers? And why are those viewers so impervious to any story that clashes with the Fox News reality?

The best way to think of Fox News is that it’s an identity-reinforcing machine.

We live in a polarized era — but the problem goes beyond partisan polarization. We live in an age when our political identities have merged with our other identities.

This is called “sorting.”

University of Maryland political scientist Lilliana Mason has been studying the implications of this sorting. Among the things she has found is that sorting has the effect of intensifying our emotions in response to political messages.

In other words, the more sorted socially you are, the more intense your reaction might be to, say, a news story that casts your party or issue preferences in a good or bad light.

This means that more and more of us have a hard time looking at political information and coming to rational conclusions. Instead, we instinctively jump to the partisan conclusion because it’s how we protect our identities.

The dynamic tends to lead to a more overheated discourse. As Mason puts it, “As social sorting increases in the American electorate, the cooler heads inspired by cross-cutting identities are likely to be taking up a smaller portion of the electorate.”

Sorting has been an asymmetrical phenomenon, however. It has taken place on both sides, of course, but according to Mason and co-author Julia Wronski, Republicans tend to be a lot more sorted by demographics:

Which brings us back to Fox News. In an age when we have become more socially sorted, we have become more enthusiastic about our side — and angrier about the other side. And with Republicans being more sorted than Democrats, that suggests there’s great demand for a steady diet of messaging that builds up the GOP and tears down Democrats.

The alternate reality of Fox News serves exactly that purpose. As Mason told me, “It’s like Fox was created for this moment.”

The biggest enemy of Fox News’s alternate reality is, of course, actual reality. And while mainstream media has its own problems, professional journalists for the most part try to give an accurate rendering of that reality.

That’s why Trump’s former chief strategist Steve Bannon said, “The media here is the opposition party.” It’s why Fox News’s top pundit Sean Hannity has critiqued “mainstream media” more than 350 times in the past year, according to an analysis of transcript data. Sinclair recently forced its local anchors to read a promo that said, “We are concerned about the troubling trend of irresponsible, one-sided news stories plaguing our country.”

Trump has filled in the subtext.

When journalist Lesley Stahl, in a private conversation with the president, asked Trump why he attacks the media so much, Trump reportedly said, “I do it to discredit you all and demean you all so that when you write negative stories about me, no one will believe you.”

This thinking has filtered down to the rank and file. According to a recent poll by the Knight Foundation and Gallup, 39 percent of conservatives say negatives news stories about politicians or political groups are always “fake news” — even if they are accurate. This is far more than liberals who say the same.

Let’s take a moment to appreciate how astounding it is for more than one-third of conservatives to admit that they’re calling something “fake” when it is, well, not.

But it all makes sense when you think about Mason’s work on sorting.

To be sure, this kind of thinking isn’t restricted to conservatives. The right may be more sorted than the left, but the left is still prone to the same cognitive tendencies.

In fact, Yale Law professor Dan Kahan elegantly shows how politics overwhelms our logic in experiments where he has subjects answer a simple number question about something nonpolitical, like skin treatments. As expected, people who are good with numbers do well, regardless of whether they are Democrats or Republicans.

However, when Kahan gives subjects the exact same question, but this time about something political like gun control, even the numbers-smart people figure out a way to use that data to argue for their partisan positions — even if it’s the wrong answer.

Exploiting those allegiances is what Fox News and Trump do, and they do it really well.

Fox News’s steady stream of messages affirms its audience’s worldview and enables it to dismiss other media outlets that present evidence of wrongdoing by Trump and his associates.

Fox News and Trump are able to immunize viewers from evidence that contradicts their reality. That reality shows that they were right to choose Trump because he’s creating jobs, lowering unemployment, and securing US borders — and everyone who says otherwise is just trying to undermine a great president.

Game of Thrones’ showrunners won’t be directing Star Wars after all
This week in TikTok: MAGA meltdowns and Gen Z revolutions
The Paris climate agreement is at risk of falling apart in the 2020s
Why Vice’s new CEO thinks Vice’s former, ousted CEO doesn’t get enough credit
How conspiracy theories like QAnon spilled into the mainstream
Trump was supposed to change the GOP. But the GOP changed him.