Community was one of the most inventive shows in TV history. Don’t let it be forgotten. 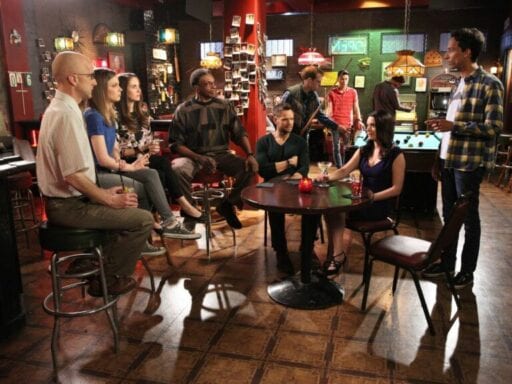 Share
Loading...
Community was a very different show by the time it ended — but still a terrific one. | Sony Pictures Television

Across six seasons and two networks, the terrifically funny series took on nearly every genre and pop culture trope.

In Watch This, Vox critic at large Emily VanDerWerff tells you what she’s watching on TV — and why you should watch it too. Read the archives here. This week: the classic sitcom Community, which debuted 10 years ago on September 17, 2009. Watch all six seasons on Hulu.

Few TV shows have changed my life like Community has.

That sounds like hyperbole, I realize, but it’s really not. The sitcom about a group of study buddies at a community college, which very quickly became a free-wheeling parody of nearly all pop culture, was one of my favorite shows of its era, and when I was a young critic, it helped me codify many of the ways I think about TV.

I reviewed every episode of the show’s first five seasons in my old job at the A.V. Club, and doing so caused my career to explode. It’s 100 percent true that I would not be sitting here, writing these words to you right now, if it weren’t for Community. Deep inside the show’s story about broken but good people trying to make each other whole was a story that I — and then lots and lots of other people — sparked to, and in trying to capture the joy it made me feel, I found my critical voice.

But I realize that “I want to better understand Emily VanDerWerff’s career” maybe isn’t the greatest hook to get you to watch a TV show. So let me explain — let her explain! — why Community holds up as something more than a cult sitcom, as something funny and bruised and real that you should absolutely check out between your other sitcom binges.

Community celebrated the sheer, unbridled freedom of the network sitcom with 22-plus episodes to fill

Community aired from 2009 to 2014 on NBC, with its sixth and final season airing on Yahoo Screen in 2016. (Remember when Yahoo was going to make television?) In that time, it became famous for three things: concept episodes (where the show would ditch its basic premise in favor of a satirical spin on some other genre entirely), a rabid cult fanbase, and low ratings. (The show was perpetually scheduled against mega-hit The Big Bang Theory, and the two shows’ numbers … did not compare.)

The concept episodes were the reason I fell so hard for Community. The show’s first season is its most sitcom-like, spinning 25 episodes about the characters learning to love Greendale Community College (a fictional school in Colorado). But late in that first season, the show unleashed “Modern Warfare,” an action movie parody about a paintball game spreading across the Greendale campus that simultaneously revealed two characters hooking up for the first time.

And the internet (or at least the parts of the internet I hung out on) exploded. The show’s pitch-perfect evocation of ’80s action cinema was something you weren’t supposed to be able to do in a TV sitcom.

In Community’s second season — the show’s best, even if it was a little more all over the place than the first — “Modern Warfare” became its new template. Even in episodes ostensibly about on-campus shenanigans, Community would offer up some prime silliness, as when one episode took a left turn and abruptly tossed in a dramatic chase scene through a blanket and pillow fort. There were stop-motion Christmas specials and Dungeons & Dragons games and homages to the film My Dinner With Andre. It was amazing TV.

Subsequent seasons — especially season four, whose disappointing nature we’ll get to in a minute — never quite reached that high level, but there is amazing stuff in seasons three and six, especially. And even when the show had an off episode, an ensemble cast that included Joel McHale right as he was starting to blow up, Donald Glover right before he blew up, and Alison Brie at the very start of her career — and that’s honestly just for starters — meant that at the very least, you’d get some funny line readings to take home.

Community’s creative team was vital to its reputation for innovation. Creator Dan Harmon was not always a champion human being, but he’s as good as anybody in TV history at coming up with oddball riffs on pop culture and sitcom tropes. When he was fired ahead of Community’s fourth season (he was rehired for the final two), it played almost as an object lesson in how tied some shows are to the voices of their creators.

And in its first three seasons, the show’s chief directors were Joe and Anthony Russo — a.k.a. the guys behind two Captain America movies and two Avengers movies (who keep working Community alums into their films). Their ability to ape big-budget movies on a network TV budget landed them the Marvel gig.

There are elements of Community that play differently to modern eyes, particularly the attraction between grown-ass adult Jeff (McHale) and actual-18-year-old-when-the-show-starts Annie (Brie). It drew plenty of criticism when the show aired, but it plays differently in light of revelations about Harmon’s sexual harassment of a young staffer in his writers’ room. (He has since apologized, in one of the few genuinely exemplary apologies of the #MeToo era.) And the show’s attempts to tell jokes about race could be … a little tone-deaf, to be generous.

But Community’s handful of misfired jokes and one romantic plotline that never really went anywhere don’t negate it from being one of the all-time great TV sitcoms. Don’t just watch Community because I love it. Watch it because if literally anything I wrote above — even just the words “Donald Glover” — makes you think you might love it, you almost certainly will.

Community is available to stream on Hulu. We’re still waiting on that movie.

The Russian government’s dramatic shake-up, briefly explained
An extremely conservative judge just rejected an effort to disenfranchise 127,000 voters
The best $129 I ever spent: Baby formula
The Senate is desperate to avoid another government shutdown — but Trump isn’t
The case for unschooling
Amid criminal probe, Michael Cohen resigns from position at RNC