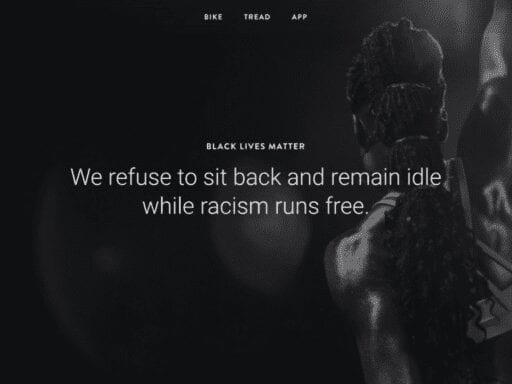 “Open your purse” is the snarky social media mantra that people are throwing back at brands.

The San Francisco 49ers want you to know that Black Lives Matter. How? By posting a single black square on Twitter with the hashtag #BlackOutTuesday. This expression of so-called solidarity comes nearly four years after the team’s former quarterback Colin Kaepernick took a knee during the national anthem to protest police brutality and racial inequality, an act that led to his ostracization by the NFL. Years later, despite being the face of Nike’s Emmy-winning campaign, Kaepernick still can’t find a job.

Across many social media platforms, the black square has become a virtue signal of solidarity by brands, corporations, and influencers. To many activists and even consumers, the square is seen as a cop-out and counterproductive to spreading resources related to the nationwide protests. For institutions like the Guggenheim Museum, which did not invite the first black guest curator in its decades of history to a panel about her work, a post appears meaningless if there is no commitment to change.

All over social media, consumers are repeating the mantra “open your purse” to these corporate platitudes and vague statements of solidarity. The phrase, which originated from a viral TikTok by creator Adam Martinez, has become a snarky response to those with influential and large followings to “put their money where their mouth is.”

The intent of these messages is clear: Donate money to organizations that aim to fix these systemic issues, instead of just speaking about them. But for companies that have a bad track record — not just regarding explicit racism, but treating employees poorly or even exploiting them — these statements ring especially hollow.

Thousands of people around the US and the world have gathered to protest police violence and the unjust deaths of black Americans like George Floyd, Breonna Taylor, Ahmaud Arbery, and many others. In the past week, many notable corporations, sports teams, brands, and influencers have felt compelled to also speak out. Since Floyd’s death on May 25, social media has been ablaze with striking images of crowded protests, alongside shareable resource posts about protesters’ bail funds, anti-racism nonprofits, and black-owned businesses. During this time, many interpret a brand or an individual’s silence as equal to being complicit, a sentiment that even Netflix acknowledged in its Twitter post.

To be silent is to be complicit.
Black lives matter.

We have a platform, and we have a duty to our Black members, employees, creators and talent to speak up.

Customers, especially millennials and Gen Z, are holding brands to a higher social standard than before. People overwhelmingly prefer to buy from companies that share their beliefs and values, especially now, in the midst of a pandemic-induced recession when spending is limited. Brands appear eager to demonstrate care for their customers and employees, and given the massive wave of social unrest, it’s natural for them to want to appear as compassionate allies. Yet, people are sensitive to tone-deaf or empty statements, and there’s no shortage of blunt criticisms online.

From mom-and-pop stores and small online retailers to name-brand, billion-dollar corporations, many are condemning racism and violence (sometimes explicitly, sometimes not) and recognizing “the power of [their] platform” in fighting racial injustice. Tech companies like Facebook, Intel, Apple, and Alphabet have also pledged to donate millions of dollars to nonprofits or to match contributions made by their employees. Smaller start-ups like Peloton and Glossier have received praise not just for their donation pledges, but for setting the standard for up-and-coming companies.

Many users also pointed out how the start-ups’ statements were specific and actionable. Peloton, for example, was not tip-toeing around racism and openly announced their support for the Black Lives Matter movement.

However, several major corporations — even those that have pledged donations — have spent hundreds of thousands of dollars lobbying members of Congress that have received an “F” rating by the NAACP, the largest civil rights organization in the US, reported the newsletter Popular Information. (Every year since 1914, the NAACP releases a legislative report card of civil rights votes; those who receive an “F” vote on key issues with the NAACP 59 percent or less.) Popular Information reported that the investment bank Citigroup, for example, has spent $180,000 through its corporate PAC to 53 members of the House of Representatives who have an “F” rating. Its chief financial officer said he will be making donations to social justice organizations and urged employees to do the same, but did not clarify how much.

While donations to anti-racism organizations are still the exception to the rule, these wide-ranging examples of corporate activism (if one can call publishing a public relations-approved statement activism) would’ve been unthinkable even five years ago. Brands used to stay publicly silent, out of fear of upsetting or alienating their customer base. But following the election of President Donald Trump and the increased polarization of the country, even the most apolitical household companies have had to be explicit about how they view issues like gun control, immigration, and women’s rights.

Up until 2017, Nike considered its collaboration with Kaepernick to be a risky business move, given how controversial Kaepernick’s kneeling protests were received by the NFL and its fans. While the company faced a fair share of backlash and threat of boycotts on social media, Nike ultimately made a record number of sales off of Kaepernick-related merchandise. All of these reasons contribute to activist-minded consumers’ skepticism towards public corporate statements, which can be boiled down to a PR facade.

“One has to ask where these corporations and brands were when Travyon Martin was killed, when Eric Garner and Sandra Bland and many many others were killed,” said April Reign, an inclusion advocate and creator of #OscarsSoWhite campaign. “I’m heartened that for whatever reason, they’re now stepping up with public statements, but unless corporations are putting their money where their mouth is, specifically donating to anti-racism causes, bail relief funds, matching the donations of their employees or doubling matching, then for me, it goes in one ear and out the other.”

Many have called out the discrepancy between a company’s policies and treatment of workers compared to the public statements delivered during a time of crisis. For example, customers found it hypocritical how Amazon has a reported history of underpaying and overworking warehouse employees in grueling conditions, especially during the coronavirus. (Eighty-five percent of Amazon’s warehouse workers are black, and the company has only one black senior-level employee.) Amazon CEO Jeff Bezos did not disclose whether he would be making any donations.

In an op-ed for the Independent, Micha Frazer-Carroll argued that corporate solidarity is meaningless when companies have had a poor track record on race. She cited Amazon’s facial recognition software Ring, selling of racist products, and documented mistreatment of warehouse workers as anti-black, writing, “From workers’ rights abuses and shady deals to selling overtly racist products on its site, as I see it, it appears definitive: Amazon does not care about black lives.”

Similar critiques have been directed toward companies like Spotify and Netflix, despite how their posts initially appeared to receive a positive response. Many independent artists pointed out that Spotify pays its creators very little compared to other streaming platforms, and some argued that its participation in Blackout Tuesday — a day where Spotify adds an 8 minute and 46-second moment of silence to certain playlists — doesn’t necessarily help or amplify black creators. The same criticism has been lobbed at Netflix: Is the platform truly making a commitment to supporting and funding work by black creatives, or was this just another example of performative activism?

“It has to start from within,” Reign told me. “You cannot say that you are standing with black and brown people when you receive hundreds of complaints from those employees about your working conditions. What do your internals look like?” She added that consumers sometimes underestimate their buying power, especially now in the midst of an economic crisis. Buyers will have less money to spend in the months ahead, and it’s incumbent upon customers to be thoughtful about who they give their money to and ultimately make their voice heard if a brand appears to deviate from its supposed values.

In the beauty community, Glossier has been hailed for its $500,000 contribution to black-owned businesses, in addition to another $500,000 to organizations like Black Lives Matter and the NAACP Legal Defense. Many beauty brands have since followed suit, stating they’ll donate a percentage of their profits or a specific sum of money to certain social justice organizations.

While Sephora says it has donated more than $1 million to organizations like the NAACP, customers are criticizing the makeup brand for encouraging people to trade in their points, which are accumulated by purchasing items from Sephora, for a donation of much lesser value. “This just feels like such an empty attempt by them,” reads one Reddit comment. “Honestly, it seems like they’re trying to pad their own pockets instead of actually supporting BLM.” Others also pointed out how the donation would benefit Sephora’s tax break.

Over the weekend, pressure from beauty customers has escalated, as many started tagging various makeup companies in a chain of posts, asking them to match the donations made by other brands. This tactic of urging others to match contributions has helped generate millions of dollars for the Minnesota Freedom Fund in just a matter of days.

This outpouring of donation dollars is a progressive step for companies, but Reign added that customers should always demand “accountability and transparency from the businesses we purchase from with our hard-earned dollars.” People have been keen to call out not just businesses, but influencers and their wealthy peers with the “open your purse” catchphrase. Louis Vuitton and Off-White designer Virgil Abloh was swiftly condemned on Twitter and Instagram, primarily by black users, for posting his $50 donation to the Minnesota Freedom Fund, while criticizing destruction in the protests.

how did i, an unemployed college student, donate just as much money as a fucking MILLIONAIRE

why is this movement seemingly dependent on people like me

There seems to be reckoning on social media, where it has become harder to ignore political topics or performatively share a hashtag to signify support. Consumers, many of whom have donated hundreds of dollars to these causes, are asking for more, and they’ve made it clear that corporate praise will be harder to come by — especially if organizations are not transparent in their commitments and hesitant to open their purses.