Coronavirus and the 2020 election: a collapsing economy is a disaster for the incumbent 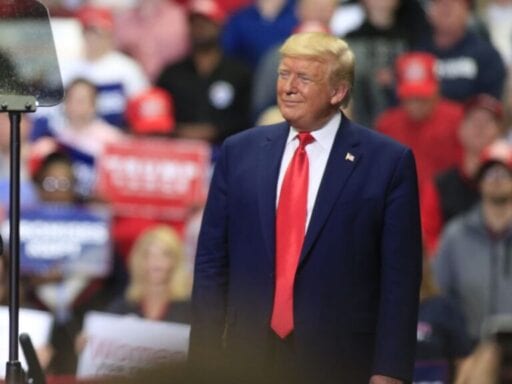 Here’s what political scientists have learned about how the economy influences presidential elections.

Is the cratering economy going to damage Donald Trump’s chances of reelection? It’s a complicated question with no simple answer, but the signs point to yes.

We don’t yet know how badly the Covid-19 coronavirus pandemic will harm the US economy. It seems likely, though, that widespread “social distancing” that has led to school and event cancellations and work-from-home edicts will devastate demand for services like restaurants, taxis, flights, hotels, etc., and make some in-person services difficult to perform in the first place (who wants to go to a yoga class right now?).

That’s a recipe for economic suffering (and the market knows it). The Trump administration is already pushing a payroll tax cut as a stimulus measure to limit the impact, while many lawmakers have pushed for even more drastic measures like cash transfers to all Americans. The Fed, for its part, has already dramatically cut rates over coronavirus worries.

But if these efforts don’t suffice and the economy stagnates or even falls into recession, the political consequences will be severe. Political scientists have known for decades that economic performance, especially in the short run, has a profound effect on election outcomes.

Some of the most influential forecasting models in the political science literature, like Michael Lewis-Beck and Charles Tien’s “political economy” model or Christopher Wlezien and Robert Erikson’s “leading economic indicators” model (more on those below), put heavy weight on economic factors in predicting which party will win the popular vote. In 2016 these models got the ultimate vote share of Clinton and Trump right with a typical error of a percentage point or less (the Electoral College, of course, meant that popular vote winner ultimately lost the race).

So the economy matters. But what’s less obvious — and important when evaluating what a late-breaking economic crisis like the coronavirus panic will mean in an election year — is how the economy matters. Does long-run economic performance matter more, or just the economy’s health during the election year? Do most voters “lock in” their votes over the summer, such that a turn in the fall isn’t likely to swing elections? Or are perceptions of the economy what matters, rather than people’s actual material economic circumstances?

We’re also limited because not every possible economic scenario has played out in the past; the only recession on record to start in the spring of a presidential election year was 60 years ago, and I can’t think of a precedent for a pandemic-provoked recession in a presidential year. In other words, if we’re in genuinely uncharted waters, we know a lot less.

But we do know some things about how the economy matters. People tend to look about two years back in evaluating economic performance, which should give Donald Trump some hope that voters will take the solid economy of 2018 through early 2020 into account. That said, a massive increase in unemployment and GDP dropoff right now could be serious enough to overwhelm whatever credit people are willing to give Trump for the past few years. This situation really is unprecedented.

People do vote based on their individual pocketbooks, and when they do, they’re time-indifferent: Benefits a while ago still count for something. That’s good and bad news for Trump because he gave some people big tax breaks in 2018 and gave surprise tax bills to others. But it appears that overall economic impressions might outweigh individual economic performance. Even people who are not themselves suffering might turn against the president if they perceive the economy to be in free fall.

With the economy poised to tumble, that’s really bad news for Donald Trump. While voters won’t forget the good economic times, a recession or slowdown right now will likely damage him badly.

When the economy matters

It’s hardly a secret that poor economic performance can swing an election. Barack Obama won by a large margin amid the economic crisis of late 2008 that Americans pinned on the incumbent party; America’s slow recovery from recession contributed to Bill Clinton’s defeat of George H.W. Bush in 1992, the last time an incumbent president has lost reelection.

But how the economy matters is more complicated. Whereas the US had been in recession for nearly a year in November 2008, the 1992 election came long after the recession ended in March 1991. The 1980 recession that contributed to Jimmy Carter’s defeat later that year was done by July, and the incumbent party candidate Richard Nixon nearly won in 1960 despite the election occurring in the midst of a mild recession.

Political scientists have sought to find a pattern in these developments.

The most comprehensive recent paper on the question of economic timing and American elections comes from UT-Austin’s Christopher Wlezien. His 2015 paper was something of a response to what had been a common economic approach used in predicting elections: the “musical chairs” model of Christopher Achen and Larry Bartels.

Achen and Bartels argued that voters’ disposable income growth in the two quarters before the election (Q2 and Q3 of the election year, covering, say, April 1, 2020, to September 30, 2020) has high predictive power, but adding in previous economic data doesn’t improve predictions at all.

The implication was that voters are incredibly myopic: they only care about economic performance in the election year and not before. This added weight to Achen and Bartels’ broader intellectual project of demonstrating that voting in US elections is arbitrary and makes democratic accountability next to impossible.

Wlezien found that there was some truth to the idea that voters are myopic, but the problem isn’t quite as severe as Achen and Bartels made it out to be. Whether you look at income growth, GDP growth, or polls of consumer sentiment, measures taken the year of the election and measures taken a year earlier do about equally well at predicting election outcomes. Beyond one year previous, you lose predictive power. But the two years before an election seem to matter, not just a few months.

“[Voters] do not look into the distant past, but they do look fairly far, about two years back,” Wlezien concludes. “They also appear to see fairly clearly, accurately reflecting economic growth during that period. It may not give us reason to offer up three cheers for representative democracy, but it may give us reason to think that elections aren’t simply a game of musical chairs.”

That’s just one theory, of course, and academics have explored this question in other ways.

Why the economy matters

One big question that has loomed over elections is whether voters are influenced by the reality of the economy — or by their perceptions of the economy.

Wlezien and his frequent co-author Robert Erikson have found good forecasting results using the Conference Board’s Leading Economic Index (LEI) measure, a weighted average of many objective economic measures (average hours worked in manufacturing, unemployment insurance claims, stock prices, etc.) and subjective ones (consumer expectations). As of January, the LEI was still increasing in the US, but Wlezien and Eriksen’s model relies on the LEI measure for the full first quarter of the election year, which includes numbers for February and March that aren’t out yet.

Lewis-Beck and Tien’s “political economy” model has also historically performed well and simply uses economic growth (measured in gross national product, not gross domestic product) for the first two quarters of the election year — an objective measure of economic well-being. But note that they have an additional quarter of data to rely on, requiring them to wait until after June to forecast, whereas the Wlezien/Erikson model, which relies only on quarter one which ends in March, allows us to make predictions about the election earlier in the cycle.

The fact that objective measures of economic growth correlate well with eventual outcomes suggests that underlying economic experiences, not just perceptions, might drive election outcomes. There’s some evidence for this abroad, too. Sweden, unusually, makes income tax records public. Anyone can look up anyone else’s tax bill. That means political scientists can match election polls to the actual incomes of Swedish people.

When Andrew Healy, Mikael Persson, and Erik Snowberg did just that, they found that personal finances were as important in determining votes as national economic conditions; both mattered, and people’s evaluations of their personal finances were less biased, based on their individual politics, than their evaluations of the national economy. Moreover, this kind of “pocketbook” voting isn’t myopic: Unlike voting based on the national economy, it can be affected by changes years in the past, and indeed a low-income tax cut implemented by the right-wing Alliance coalition in 2006 increased votes for the Alliance in 2010.

That suggests that the tax cuts early in Trump’s turn could still matter, both positively (for upper-middle-class voters who benefited) and negatively (because of the withholding fiasco that denied many people expected refunds in 2019).

But as Healy et al also find, perceptions of the overall economy matter too. And the perceptions themselves matter above and beyond the objective reality.

Some of the best evidence for this point comes from Mark Andreas Kayser and Arndt Leininger, who found that using first-pass economic data from US statistical agencies leads to more accurate election forecasts than using more accurate, corrected data released later on. That’s a decent indication that economic perceptions, which are presumably driven more by data released in an election year than data released after the fact, matter independently of the objective economic conditions driving them.

We don’t yet have sufficient data to run any of these models yet. But here’s an illustrative example. The Lewis-Beck/Tien model estimates the two-party vote share for the president’s party (that is, for Trump) as 37.50 plus .26 times the president’s popularity in the most recent Gallup poll (47 percent) plus 1.17 times GNP growth in the first two quarters of the election year.

Let’s suppose that the first two quarters of 2020 are like the final two quarters of 2008, given that many economists expect this downturn to be even worse than that one. GNP shrunk by about 2 percent during those quarters. That spits out a prediction that Trump will get 47.4 percent of the two-party vote, for a loss of over 5 points. That’s probably enough to overcome Trump’s big advantage in the electoral college.

I want to be very clear: The above is not a forecast. We do not know how bad this economic crisis will get. But if it’s even close to 2008, the political consequences for Trump could be dire.