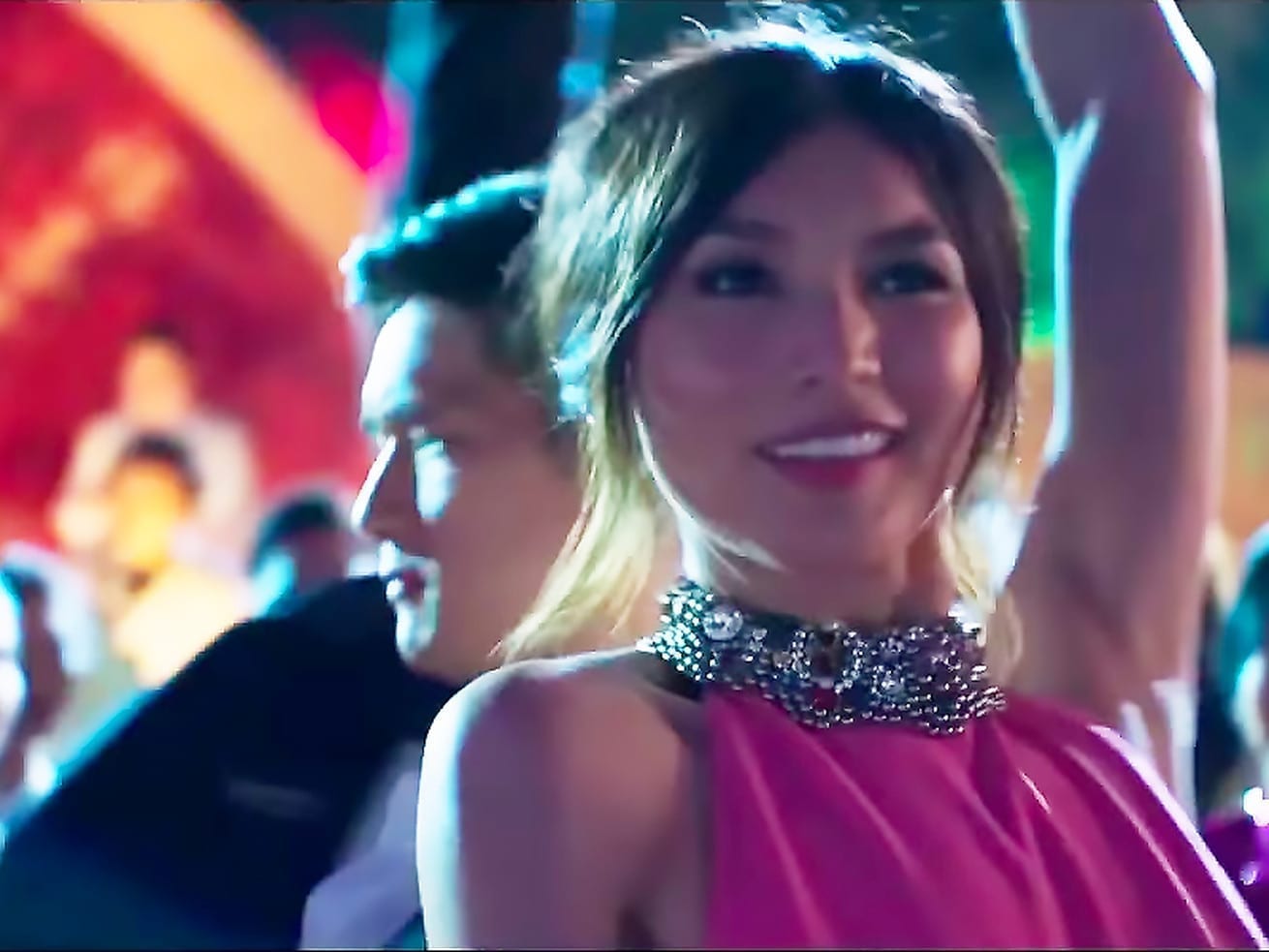 Who is that guy, and what’s up with that Look? Hello, Charlie Wu.

If you went to a screening of Crazy Rich Asians this week, there’s a good chance you heard some squeals of glee in your audience over a brief mid-credits scene. But while it is indeed very brief — and dialogue-free, for that matter — that scene actually tells us a whole lot about Crazy Rich Asians.

Specifically, it tells us that a certain secondary character isn’t so secondary after all; that this film is even more indebted to Jane Austen than you may have thought; and that the producers of Crazy Rich Asians are already betting on at least one sequel — and possibly two.

How can we tell all that from a single shot? To break it down, we have to spoil the scene in question, so don’t read unless you want to know more!

The film’s end credits briefly pause to give us a blip of a scene in which our secondary heroine, Astrid (Gemma Chan), makes lingering eye contact with a random man at a lavish party. The man, played by Glee’s Harry Shum Jr., goes unidentified, and the film gives no context for the heated glances they share before continuing to roll the credits — which place Shum’s name unusually high for such a brief appearance.

So what was that about?

To understand the full context of those glances, we have to dig into the rom-com heart at the center of Crazy Rich Asians’ heavily stylized opulence. In the midst of the film’s fabulous romance about Rachel (Constance Wu) winning true love with her billionaire boyfriend Nick (Henry Golding) as she visits his megarich family for the first time, the film gives us two other couples at various stages of their relationship: Nick’s best friend Colin (Chris Pang), who’s getting married to wealthy heiress Araminta (Sonoya Mizuno); and Astrid and her husband Michael (Pierre Png), who cheats on her over the course of the film.

Now, you might think those other two relationships are there to reflect the issues of class and cultural differences surrounding Rachel’s relationship with Nick. And you’re not wrong. But there’s more going on — at least where Astrid is concerned.

You see, the real main romance of Crazy Rich Asians — or at least Kevin Kwan’s novel Crazy Rich Asians and its two sequels, China Rich Girlfriend and Rich People Problems — is between Astrid and that guy you see at the end of the film for a hot second.

His name is Charlie Wu. And if you thought Nick and Colin were rich, dreamy boyfriends, well, strap in, because Charlie? Charlie will blow your mind.

Throughout Crazy Rich Asians the novel, Astrid is presented as sort of the modern Asian Audrey Hepburn: She just has it. But alongside her glamour and mystique, her warm, down-to-earth personality makes her one of the series’ few deeply relatable characters. The books are sharply satirical, and even Astrid, as nice as she is, is presented as a girl who needs to learn to embrace her proper role as the fashion princess of Singapore’s unofficial ethnic Chinese royal class. In both the book and the film, her tendency to tiptoe around her wealth is a major factor in the shame and unhappiness Michael brings to their unequal marriage.

But waiting in the wings for Astrid as her marriage to Michael falls apart is an old boyfriend who, imagine it, has always loved her unconditionally, without expecting her to change for him. That’s Charlie, and he loves Astrid enough to take her just as she is: rich, beautiful, and goddess-like.

Throughout the book, we learn snippets of Astrid and Charlie’s backstory before Charlie ever appears on the scene, and they have quite the history: They dated as teenagers, and Charlie essentially popped Astrid’s fashion cherry — that is, he took her on a guided tour of Paris for the very, very rich. There, he taught her to enjoy spending her bottomless well of money on fashion, jewels, and luxury, and set her on the path to becoming the style icon she is today.

However, teenage Astrid was very impressionable, impetuous, and tempestuous. And as the film makes clear, her family (the mighty Shang/Tsien clan) isn’t exactly approving of relationships that fall outside of their highly exclusive, ultra-elite circles of influence and power.

So despite Charlie’s considerable new-money wealth, Astrid’s family pressured her into breaking up with him. (Specifically, she threw a Frosty at him in the parking lot of a Wendy’s. It sounds legendary.) Her marriage to Michael — who had no money but lots of social clout, and thus was an “acceptable” choice — followed not long after and is heavily implied to be a rebound for Astrid.

As the book unfolds, Astrid, facing divorce and looking back, is able to admit she was horrible to Charlie all those years ago.

But Charlie, in a totally understandable, deeply relatable instance of torch-bearing, never stopped loving Astrid. (I mean, have you met Astrid? She’s amazing.) Instead, he grew up and became a tech magnate, turning his family’s already voluminous fortune into something truly astronomical. Armed with the wisdom gleaned from years of life experience, and a computer empire, he returns from the hinterlands of Taiwan to make an appearance at Colin’s wedding. There, he steps in and helps Astrid deal with Michael in a manly, sexy way that involves his many tech resources, as well as dumping a lot of money to help bail out her marriage — for now.

All of this side plot was originally intended to make its way into the movie adaptation of Crazy Rich Asians: There are two juicy blink-and-you’ll-miss-it Charlie/Astrid tidbits that appear in each of the movie trailers, featuring them dancing, which does not happen in the final film. Fortunately, Tumblr fans were all over it:

Crazy Rich Asians owes a deep debt to British satirists — particularly Jane Austen and William Makepeace Thackeray — in the way it lampoons the excesses of the rich while indulging in its own opulence, as well as its presentation of the cross-cultural messiness of modern postcolonial Asia. The movie doesn’t really pull hard on either of these threads, but they’re major themes of the novel.

For starters, Nick and Rachel occupy roles that will be instantly recognizable to fans of Austen’s Pride and Prejudice: They each contain shades of the snobbish Darcy and the penniless Elizabeth, and the novel frames them that way. Perhaps most notable here is the book’s description of the first time Rachel sees Nick’s grandmother’s house, which is a mirror of the famous description of Elizabeth seeing Darcy’s estate, Pemberley, for the first time.

Over the course of the next two books, Rachel may have to become a bit more like Thackeray’s scheming Becky Sharp, of Vanity Fair, as she navigates the crazy rich world around her; but for now, she’s the girl who wins true love by convincing her soul mate to turn his back on class prejudices.

As for Astrid? Her plot is straight out of another Austen novel: Persuasion. That novel’s heroine, Anne, famously rejects the eligible young Wentworth, even though she loves him desperately, because her family disapproves of him despite his upward mobility. Years later, Anne is a spinster who’s never really recovered from her heartbreak at losing Wentworth — and then he turns up in the neighborhood once more, now a rich, successful military captain with his eye on a completely different girl, even though he still loves Anne.

Persuasion is perhaps Austen’s most overtly romantic book, in that while it’s about the perniciousness of family pretension and classism, it’s also about two people who never stop loving each other despite getting in their own way. There are also definite shades of Austen’s Emma in Charlie’s dynamic with Astrid, as he, like Emma’s Mr. Knightley, waits faithfully for his heroine to mature and realize they’re soulmates.

All of this deepens Crazy Rich Asians’ commentary on colonial narratives, even as it indulges in familiar romance tropes. The film isn’t just a riff on Austen, after all; it’s a conscious reclamation of Westernized storytelling devices that have, for centuries, marginalized Asian figures rather than incorporating them in those narratives.

But these days, Singapore is a major international city-state, and the use of these familiar English-authored tropes (along with its title) reflects the book’s awareness that this modern postcolonial society is now empowered, for better and for worse, to colonize right back.

All of this spells good things for Crazy Rich Asians fans

Over the course of the next two books, Charlie gradually maneuvers himself back into Astrid’s life, while she deals with her marriage to Michael and realizes she’s still in love with Charlie after all this time. It’s a delicious slow burn, and Charlie is pretty much a dreamboat the entire time.

Of course, unless you read the book, you wouldn’t know about any of this without that mid-credits scene where Charlie shows up out of the blue. So the fact that he does is very telling.

The Crazy Rich Asians filmmakers could have simply axed the Charlie-Astrid side plot completely — but instead, they left in the credits scene as a huge Easter egg for fans of the books. That tells us that they were always banking on the movie being enough of a hit to justify at least one sequel, and perhaps two, that would allow that mid-credits tease to play out more fully.

That’s looking like an increasingly safe bet: following the film’s stellar opening-weekend performance, reports surfaced that Warner Bros. is currently developing the sequel, with the same filmmaking team in place, and that the studio has the rights to Kwan’s entire trilogy and has a plan for two more films.

So if you’re a fan of the books, you’ve got a good shot at seeing Charlie and Astrid find love on the big screen at some point in the future. And if you’re just discovering their relationship through the film, congratulations — you’ve got a brand new romance for the ages to discover.

The cost of an ad-free internet: $35 more per month
Read Barack Obama’s eulogy for Sen. John McCain
Vox Sentences: Action against the “murderous operation” in Myanmar
“We’re in the climax of a movie”: Tim Urban on humanity’s wild future
Uber drivers have fewer passengers — and face greater risks — than ever
Are our pets gobbling up the planet?