Critics are panning Star Wars: The Rise of Skywalker for fan service and a lack of ambition 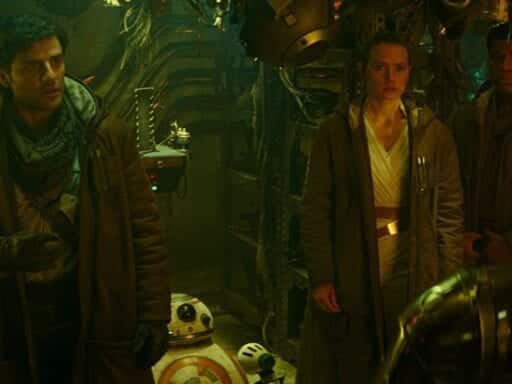 The Rise of Skywalker’s first reviews paint a dismal farewell to the trilogy.

For the last four years, Star Wars fans have been eyeing the end of the current trilogy — comprised of 2015’s The Force Awakens, 2017’s The Last Jedi, and this year’s The Rise of Skywalker, out this week — with both heated anticipation and dread. The Rise of Skywalker is the final chapter of a trilogy whose first two chapters were generally well-received, and which has felt like a huge improvement over the dismal prequel trilogy that debuted in 1999. But as the last Star Wars feature film for some time, The Rise of Skywalker has a lot riding on it. The movie was always going to either be a fantastic goodbye or a disappointing farewell for fans.

And now the end is here.

The film doesn’t pick up immediately after the events of 2017’s The Last Jedi. Our heroes — Rey, Finn, Poe Dameron — are all in different places after being scattered after the First Order’s massive attack. An attack in which Luke Skywalker sacrificed himself to allow the Resistance a chance to escape.

In her review of the film, Vox film critic Alissa Wilkinson called it a “colossal failure of imagination.” She felt that the ingenuity and charm of the previous two films were absent in The Rise of Skywalker, having been sacrificed in the name of fan service:

It has a lot of lightsaber battles, but it lacks humor, the thrilling reveals of The Force Awakens, and the visual imagination of The Last Jedi. Moments are emphatically teased (particularly one between Finn and Rey) and then never resolved, presumably so that they can be mined for fan service in some future comic book or TV show.

Wilkinson’s concerns regarding fan service are shared by a number of other critics, many of whom have concluded that director J.J. Abrams and other Star Wars powers listened to the extensive criticism thrown at The Last Jedi by a certain faction of vocal Star Wars fans, and created a movie intended to appease them. Their issues with The Last Jedi included, among other complaints, that the movie was too progressive, too uninterested in fan theories, and too unexpected. These feelings also led to toxic harassment of star Kelly Marie Tran by “fans” who made racist attacks against the actress over her role as the first lead female character of color in the franchise.

The Associated Press’s Jake Coyle asserted that The Rise of Skywalker regresses by relying too heavily on the franchise’s tropes:

Not much has caused a disturbance in the “Star Wars” galaxy quite like Rian Johnson’s “The Last Jedi,” an erratic but electric movie that, regardless of how you felt about it, was something worth arguing about. The same can’t be said for J. J. Abrams’ “Rise of Skywalker,” a scattershot, impatiently paced, fan-servicing finale that repurposes so much of what came before that it feels as though someone searching for the hyperspace button accidentally pressed the spin cycle instead.

But the biggest and most common criticism of the film is that it’s too safe and formulaic. Time’s Stephanie Zacharek wrote:

This overloaded finale, directed by J.J. Abrams, is for everybody and nobody, a movie that’s sometimes reasonably entertaining but that mostly feels reverse-engineered to ensure that the feathers of the Star Wars purists remain unruffled. In its anxiety not to offend, it comes off more like fanfiction than the creation of actual professional filmmakers. A bot would be able to pull off a more surprising movie.

Not all the reviews are bad, however. The Rise of Skywalker is hovering around the score of 54 on Metacritic and 56 percent fresh on Rotten Tomatoes, and a few critics, like The Guardian’s Jordan Hoffman, didn’t outright hate the fan service. It just seems that viewers will need to avoid thinking too hard about the details. Hoffman wrote:

The movie snaps together like a jigsaw puzzle, a series of concluding beats that seem inevitable and perfect, and designed to please all parties, so long as you don’t dwell on the logic too much.

Of course, Star Wars is such a big and beloved franchise that even dozens of negative reviews could not stop loyal fans from seeing The Rise of Skywalker. No doubt there will be plenty of fans who like the film no matter what critics say. And they’ll have their chance to weigh in very soon.

The Rise of Skywalker officially opens in theaters on Friday, December 20, with early showings in many markets on Thursday, December 19.

Watergate had tapes. Trump has tweets.
A whistleblower has filed a complaint about a Trump phone call with a foreign leader
As the Ukraine probe heats up, Trump and Giuliani are sticking together. Mostly.
Child care has become scarce — just when front-line medical workers need it the most
Trump’s war on Fox News and the future of right-wing media
A top Covid-19 vaccine trial is on hold after a patient had health problems. Good.