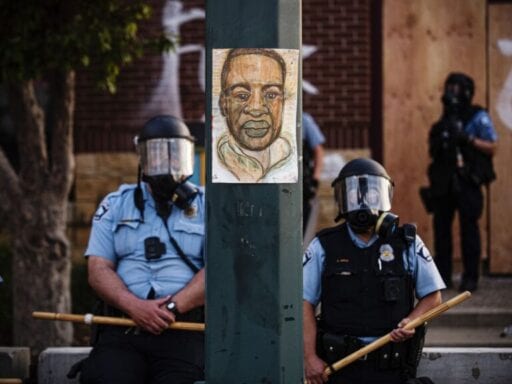 “Organizers like us have been fighting police brutality in our city for years. It’s time for a radical shift.”

Before there was George Floyd, there was Philando Castile, shot by a police officer while being pulled over during a traffic stop. There was Jamar Clark, shot by police who responded to a paramedic call. Christopher Burns was strangled when two officers used a chokehold, and David Smith was restrained by police officers before he died of asphyxiation. These were all Black people killed by police officers in or near Minneapolis.

We are part of Black Visions, a Black-led, queer- and trans-centering organization that has been connecting Black communities in Minnesota and fighting for the safety of our community. For over a decade, we as community organizers have been building strategies to address state-sanctioned violence. The world might suddenly be focused on the city of Minneapolis, but racial inequality and police brutality have always been here, and we’ve been fighting it.

In an interview with MPR News, Minneapolis City Council member Andrea Jenkins, the first openly transgender Black woman elected, acknowledged that “Minnesota has some of the worst disparities between Blacks and whites in the entire country.” She isn’t wrong.

Minnesota, which has a Black population of about 6 percent (Minneapolis has a Black population of just under 20 percent), has had the fourth-biggest employment gap between Black and white residents in the US: In recent years, about 8 percent of Black households were unemployed, compared to 3 percent for white households. Reading test scores of Black fourth-graders have been much lower than their white counterparts, making it the second-widest gap of the 41 states that tested enough black students. According to 2017 census data, 76 percent of households in Minneapolis headed by a white person own their home compared to 24 percent for black people, one of the largest disparities in the nation. In 2019, a financial news website ranked Minneapolis the fourth-worst metro area in the United States for Black Americans, based on such disparities.

Then there are police killings: Black people accounted for more than 60 percent of the victims in Minneapolis police shootings from late 2000 through 2018. Of all on-duty, fatal shootings by MPD officers, the only officer to be convicted in decades was Mohamed Noor — a Black MPD officer who shot and killed Justine Ruszczyk, a white woman, in 2017. Her family received a $20 million settlement. The hypocrisy in the sentencing of Noor versus multiple white police officers, including Chauvin, is telling.

Racism in the Minneapolis Police Department is far from hidden. A 2007 racial discrimination lawsuit brought by Black police officers (including current Police Chief Medaria Arradondo, before he became chief) stated that the head of the police union openly wore a white power patch on his motorcycle jacket. This is the same lieutenant who called Black Lives Matter a “terrorist organization” and hosted the police union’s “Cops for Trump” T-shirt fundraiser.

The lawsuit was one of many attempts aimed at curtailing racial discrimination against Black cops and, presumably, angling for a better relationship with the Black community. Other changes have included the appointment of Janee Harteau, an openly gay woman, as police chief in 2012 and a review from President Obama’s Department of Justice. There was also the settlement that led to trainings to prevent police from holding detained people in prone positions — the very tactic that Derek Chauvin used to kill George Floyd. In 2018, under pressure from community groups Black Visions and Reclaim the Block, Minneapolis City Council shifted $1.1 million from MPD and reallocated it toward community-based public safety initiatives.

But even with all the work that has gone into fighting to end the culture of racism in the MPD, police are still killing Black people — and the city has reinvested in their service. In December of 2019, Minneapolis Mayor Jacob Frey and our city’s leadership used our tax dollars to add $8.2 million to the police department’s budget, making it a total of $193 million pulled from our pockets for 2020.

Our city’s choice to invest in a police department drenched in racism instead of the well-being of Black communities has been a death sentence for our family members, friends, and neighbors. We are left to grapple with where to go from here. How do we find safety in our city and in our homes? How do we find a future for our children? We’ve tried reform. Now we need a radical shift.

It’s time to stop funding the police and start funding real community safety and well-being. Civic institutions in Minneapolis are already acting on the first part: The University of Minnesota this week cut some of its financial ties to the Minneapolis Police Department. A day later, the Minneapolis Public School Board director announced a draft resolution to end their contract with the MPD.

However, removing public resources and power from the MPD is only one side of the equation. As Patrisse Cullors, Black Lives Matter Global Network co-founder and artist, said, “We must defund law enforcement and reimagine a world that relies on an economy of care versus an economy of punishment.” We need to be funding more social workers, educators, and public health workers instead of funneling more money toward the police.

That is our vision too. That is why we believe that it is time for Minneapolis to divest from violent policing infrastructure and invest in strengthening Black communities. When we protest, we are mourning the loss of our neighbor, we are expressing our anger at the injustice, we are expressing our fear for our communities, and we are dreaming and demanding a different future for us, for our city, and for our country.

We know tepid reforms don’t work. We know the path forward, we are marching on it, more are joining us. Now is the time.

Kandace Montgomery and Miski Noor are members of Black Visions, a queer- and trans-led Black base-building organization fighting for the rights, resources, and dignity of Black people in Minnesota.