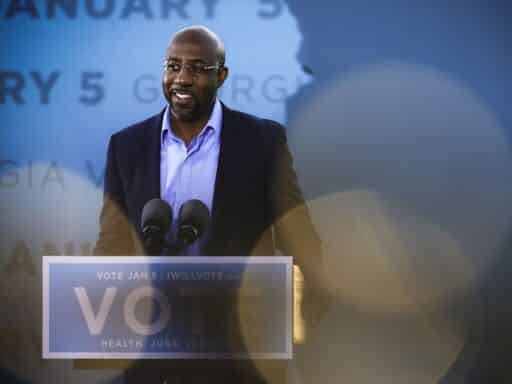 Warnock’s Georgia win is a blow to Republicans.

Democrat Rev. Raphael Warnock has won a US Senate seat in Georgia, beating Republican Sen. Kelly Loeffler in one of the state’s pivotal January 5 runoff elections.

The race was called by Vox’s elections partner Decision Desk at 11:13 pm ET.

Warnock’s win is historic; he’s the first Black senator to be elected in Georgia, which fought on the side of the Confederacy in the American Civil War. Warnock is the 11th Black candidate ever elected to the Senate, and he will be one of just three Black senators in the current Congress, along with Sens. Cory Booker (D-NJ) and Tim Scott (R-SC).

“Georgia is the home state of Martin Luther King Jr.,” Warnock told Vox in an interview this fall. “It has long been the tip of the spear for change in America. And I think that through this movement that we’re building, it once again will be a central focus for that change.”

Warnock, the senior pastor at Ebenezer Baptist Church in Atlanta, referenced the historic nature of his win during remarks early Wednesday morning. He talked about growing up in a Savannah, Georgia, housing project, “a son of my late father who was a pastor, a veteran, and a small businessman, and my mother who as a teenager growing up in Georgia used to pick somebody else’s cotton.”

“The other day, because this is America, the 82-year-old hands that used to pick somebody else’s cotton went to the polls and picked her youngest son to be a United States senator,” Warnock added during his remarks.

Georgia, once staunchly a conservative state, has seen immense demographic change in recent years — but has also seen a Democratic Party that is increasingly organized. Democrats can thank voting rights groups aimed at turning out voters of color en masse for Warnock’s win, which was powered by nonwhite voters.

“We knocked on our 2 millionth door yesterday, we’ve made 5 million phone calls, 3 million text messages to Georgia voters,” Nsé Ufot, CEO of the voting rights group New Georgia Project, told Vox. “We were all surprised with the results of the November election, and I maintain Georgia is a battleground state.”

President-elect Joe Biden won the presidency on November 3, but he doesn’t have much chance to deliver on the bold agenda he’s proposed without buy-in from Congress.

Biden is entering office facing multiple crises: The Covid-19 pandemic is worsening in the US even as vaccines start to be delivered across the country, and millions of people are still out of work due to coronavirus-related layoffs. After months of partisan gridlock, Congress managed to pass a $900 billion economic relief package before the new year. Biden has said he wants more economic stimulus, and has a better chance of doing so now that Democrats will control the Senate.

But Democrats will still have to contend with Senate Republicans. Winning both Georgia seats means Democrats will have 50 seats in the Senate, plus Vice President-elect Kamala Harris serving as a crucial tie-breaker for simple majority votes.

The catch is that most bills need to clear a 60-vote supermajority in the Senate. Therefore, even if Democrats have control of the Senate, they still need around 10 Republican votes to get things done — unless they vote to eliminate the filibuster and change Senate rules to a simple majority rule vote for legislation. A number of Democrats, including Sen. Joe Manchin of West Virginia, staunchly oppose this.

Warnock and Ossoff’s wins mean that Democrats will have to win over fewer Republican senators to get some basic work done; they now have two more reliable votes on routine — but important — Senate functions like confirming Biden’s Cabinet or judicial nominees.

So Warnock and Ossoff’s wins in Georgia get Democrats two steps closer to governability.

A key FDA vaccine committee declined to vote on a Covid-19 vaccine
Several of the Museum of the Bible’s prized holdings are forgeries
Mitt Romney just did something that literally no senator has ever done before
Pete Buttigieg is raising money from Silicon Valley’s billionaires — even as Elizabeth Warren attack...
What it’s like working at the polls in the middle of a pandemic
South Korea has brought new coronavirus cases under control. It’s taking steps to reopen public life...