Democrats’ long game on the Supreme Court: it might be too late to stop Kavanaugh, so what then? 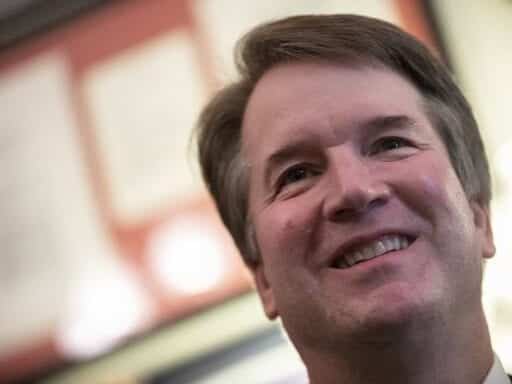 “Hopefully this is a lesson to Democrats that elections have consequences.”

Democrats may be focused on sinking Brett Kavanaugh’s Supreme Court nomination in the short term, but many note that the fight also offers its own long-term lesson: The party desperately needs to educate voters about the importance of the Supreme Court.

“The biggest thing is for Democrats to communicate the stakes of the Supreme Court, without running away from the issue,” says MoveOn Washington director Ben Wikler. Wikler notes that Democrats have not only been vastly outspent and out-messaged by Republicans on the Supreme Court, they’ve broadly been reluctant to talk about it in the past.

“For the past 40 years, the amount of money and the volume of communication about the importance of the courts on the right has dwarfed those on the left,” he says. Because the Supreme Court appeared relatively stable, the party just didn’t feel the urgency, he said.

Since President Trump’s announcement nominating Kavanaugh last Monday, Democrats have been beating the drum on health care as a means to unify the caucus — and hopefully sway two pivotal Republican moderates. The best shot they have is to convince Republican Sens. Lisa Murkowski and Susan Collins to go along with them. Then if they can crush the Kavanaugh nomination and delay the vote until after November, they must pressure Trump to nominate someone more palatable to Senate Democrats.

It’s at best a long shot. Even if they are successful, the gambit could actually put them in an even tougher electoral position in November and beyond. There are many red-state Democrats up for reelection this year who badly need to show they have bipartisan credentials. And even if they win the Senate, if they can’t get a friendlier Supreme Court pick, they’d be left defending an open seat on the Supreme Court until 2020.

Beyond this immediate battle, Democrats are also mulling over some of the enduring lessons of this fight — including the need to boost voter turnout during the upcoming midterms and communicate why the Supreme Court matters — as they seek to prevent a frenetic scramble like this from happening again.

Red-state Democrats are among the lawmakers in some of the toughest positions as the Kavanaugh fight continues to unfold, so much so that Republican Sen. Lindsey Graham (SC) has called the choice they face a “nightmare decision.”

For lawmakers like Sens. Joe Donnelly, Joe Manchin, and Heidi Heitkamp — all of whom represent states that Trump won by a wide margin and are up for reelection this fall — the choice seemingly comes down to a betrayal of the Democratic caucus if they back Kavanaugh or an onslaught of attacks from the president and their opponents if they opt to block him.

In one possible scenario, Democrats win this round of the Supreme Court fight but lose even more seats in the Senate as red-staters get hammered for their decision. Already, Missouri Attorney General Josh Hawley has been targeting Sen. Claire McCaskill with advertisements about the Supreme Court nomination, slamming her as a “radical” liberal who’s aligned herself with others to the left like Senate Minority Leader Chuck Schumer.

The conservative Judicial Crisis Network is also gearing up for a massive spend dedicated to turning up the heat on these senators.

Wikler argues that saving these lawmaker’s political lives will depend on an aggressive effort to rally Democratic votes in their home states — a strategy that relies as much on shoe-leather canvassing as it does on broader social media outreach.

“Midterm elections are about base mobilization. It’s impossible for Democrats to get elected without votes from Democrats,” says Wikler. “If everyone who’s in favor of Medicaid expansion votes for the Democrat in 2018, Democrats will take the Senate.”

“The Democratic Party in those states has to come alive and really be helpful and look not just at one vote, but at their whole voting record,” Sen. Dianne Feinstein (CA), the ranking member on the Judiciary Committee, said. “If they look at the voting record, it’s one that’s positive for their people.”

Neera Tanden, the president of the Center for American Progress, noted that Democrats’ strategy to focus on health care during the midterms has dovetailed with the Supreme Court face-off, which means that an expansive network of resources is already being deployed to get this message across in red states.

“There are people in the coalition ready to go up with ads,” she says. “There’s already a focus on driving a health care debate in those Senate races, so that infrastructure is moving toward the Supreme Court battle.”

The path forward is about educating voters — and winning races

As Democrats look to the future, they are dedicated to harnessing constituent energy in order to both shape the Kavanaugh vote and usher in a Senate majority that will ensure that the caucus has the votes it needs in case more nominees come down the pike.

Tanden notes that Democrats should have paid more attention to the judiciary. “I think there are a whole range of issues where we had an underinvestment, because at the end of the day, people could go to sleep at night because they knew Barack Obama was president,” she says.

Sen. Tim Kaine, Democratic nominee Hillary Clinton’s 2016 running mate, acknowledged that raising possible Supreme Court nominations is something that could have benefited from more attention during the presidential election. “Yeah,” he said. “This is now fundamentally about today and tomorrow, and not two years ago, but I think — from the White House and others — that would have been smart.”

“The strategy is you got to win at least one House, and if it’s this House, you prevent it,” said Feinstein when asked how Democrats ensure they aren’t caught in another quandary like the current one. “That’s the only strategy.”

“We really have to deal with the moment right now,” Sen. Cory Booker (NJ) said. “But hopefully this is a lesson to Democrats that elections have consequences.”

As Vox’s Ezra Klein has written, the 2014 election played a pivotal role in setting up Republicans’ numeric advantage in the Senate, giving them the votes they needed to effectively block Merrick Garland’s Supreme Court nomination:

I remember covering the 2014 election, and the narrative was that it just didn’t matter. Barack Obama had won reelection in 2012 and gotten filibustered on virtually everything he tried. Government was gridlocked, and no matter what happened, it was likely to stay gridlocked. Democrats were disappointed and disaffected. What was the point?

Turns out the Supreme Court was the point. The lure of an open Supreme Court seat is why many conservatives turned out for Donald Trump in an exceptionally close election; it’s possible that McConnell’s gambit elected Trump.

“Progressives have been really interested in a check on Trump, and the easiest manner to do that is engage in the House elections,” Tanden says. “What the Supreme Court battle makes clear to people is how central winning the Senate is.”

“There needs to be more of a sense of urgency as these issues are being decided. [A look at] the power the president has, the power the Senate has. People should understand these things, and they should be urgent enough to make them go out and vote,” Booker added.

Looking even further down the road, Sen. Sheldon Whitehouse (RI) argues that Democrats need to mount a more comprehensive education campaign about the Supreme Court and how its recent pattern of decisions has undermined worker and voter rights.

“Our fundamental problem is that we start to have this discussion when there’s a vacancy,” said Whitehouse, as part of an interview with Slate’s Amicus podcast. “What we have not done is acted patiently, persistently, and strategically knowing this day was going to come.”

The Kavanaugh fight could help Democrats develop a blueprint

For the Kavanaugh face-off, the Democratic activist group Demand Justice is dropping a $5 million investment aimed at potential swing votes — something that didn’t happen during Neil Gorsuch’s confirmation, Wikler notes.

“Every time Democrats fight, they build the muscles for the next fight,” he says. “Loss aversion is one of the most motivating forces in politics. Democrats are feeling the adrenaline.”

The infrastructure that the party has developed to launch this opposition — including coordinating many of the activists who helped save the Affordable Care Act — could mean that it’s more prepared for future battles.

“The reason there is this frustration is partly that these are fights that Democrats can’t seem to win,” said Whitehouse in his podcast interview. “And that is, in significant measure, because we have not spent time preparing for these fights. We have not built the record of what these 5-4 decisions mean. … We have not been after this issue politically or in op-eds.”

Post-midterms, if Democrats do manage to win back the Senate majority, they’ll have a leg up in the advise-and-consent process for any Supreme Court nominees that Trump is interested in selecting. That means they could potentially push a more moderate pick and leverage the kinds of strategies McConnell used to stymie Garland. (McConnell is famously known for declining to hold a Senate hearing or vote on Garland — efforts that led to the successful hindering of his nomination.)

“I hope Democrats have learned from the hardball tactics that Republicans have engaged in,” Tanden says.

Barcelona is pushing out cars and putting in superblocks. Here are the 2 biggest challenges ahead.
K-pop fan activism for Black Lives Matter needs context
For 20 years, Neopets has taught us how to care for virtual pets — and each other
The Senate GOP’s leverage on the coronavirus bill is shrinking
Obama says that Americans are seeking “improvement” not “revolutionary” change
Hundreds of families could be deported almost as soon as they’re reunited