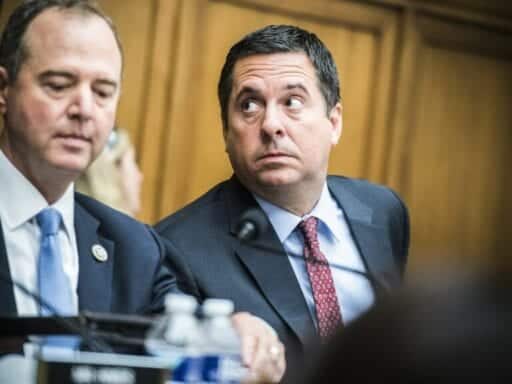 House Oversight Committee ranking member Devin Nunes (R-CA) began his opening statement before former special counsel Robert Mueller testified before his committee by acknowledging that collusion occurred during the 2016 election — but not in the way most people think.

“There is collusion in plain sight — collusion between Russia and the Democratic Party,” said Nunes, who worked hand in hand with the White House to push back on the Russia investigation during the early days of Donald Trump’s presidency. “The Democrats colluded with Russian sources to develop the Steele dossier. And Russian lawyer Natalia Veselnitskaya colluded with the dossier’s key architect, Fusion GPS head Glenn Simpson.”

Nunes’s subsequent questioning of Mueller consisted of him essentially name-dropping a bunch of peripheral players in Russiagate in a manner that suggested some sort of nefarious conspiracy was at play. But one doesn’t need to wade into the weeds of his conspiracy theory to recognize that the allegation that Democrats colluded with Russia to defeat Hillary Clinton and help Trump become president is absurd on its face.

As bizarre as Nunes’s behavior during the hearing on Wednesday was to the uninitiated, it wasn’t a surprise to avid watchers of Fox News, where Nunes has been turning reality on its head for years.

Hannity claims he “hasn’t yet been wrong yet in all of this,” asks Nunes how “it’s possible in the United States of America” for Clinton to collude *both* with Russia & the FBI.

And it’s not just Nunes — as Media Matters detailed, no fewer than 10 House Republicans asked Mueller questions on Wednesday that were steeped in conspiracy theories that have flourished on Fox News about how the Russia investigation was purportedly a product of anti-Trump bias among Obama-era FBI and intelligence community officials. Fox News even pushed conspiracy theories about the Russia investigation during its live coverage of Mueller’s testimony.

These claims are far-fetched, to say the least. Americans lived through the hacking of the Democratic National Committee and Clinton campaign in 2016, and the ensuring WikiLeaks propaganda campaigns. Even before intelligence community officials publicly said Russia was trying to help Trump, there was little doubt the hacks and strategic publication of purloined emails were intended to do maximum damage to Clinton, and thereby help Trump’s prospects.

Furthermore, the idea that the FBI had it out for Trump back in 2016 — when its counterintelligence investigation of the Trump campaign began after campaign foreign policy adviser George Papadopoulos told an Australian diplomat that Russia was in possession of Clinton’s emails — is belied by the fact that the bureau didn’t leak about it in months leading up to the election, at a time when such leaks could’ve ended the Trump presidency before it began.

But these conspiracy theories are useful. As the Washington Post’s Greg Sargent wrote in response to a Wednesday morning Trump tweet baselessly accusing Democrats of “fabricat[ing] a crime” and then trying to pin it on him, they’re designed to “flood the media zone so that the press gives equal weight to a series of lies alongside the truth about Trump’s corruption, misconduct, and likely criminality, thus diluting the latter’s impact.”

And for House Republicans, pushing these conspiracy theories was also a shrewd strategic move. Because Mueller decided to limit his testimony to his final investigatory report, he generally didn’t push back when Republicans tried to muddy the waters, allowing them to do so with impunity.

.@RepSteveChabot‘s questioning illustrates a vulnerability of Mueller’s strategy of sticking to his report — it allows Republicans to push conspiracy theories without any pushback pic.twitter.com/xavIlQpmpF

So while Nunes’s collusion allegation may not make any sense to those familiar with the timeline of what happened in 2016, it had the upside of possibly sowing doubt in the minds of those who are not. It also helped shift attention from the scandal at the root of the Russia investigation to Democrats. And that, for House Republicans who continue to stand by Trump through thick and thin, is a victory, even if their talking points aren’t rooted in reality.

The golden age of kids’ YouTube is over. Good.
The week in Brexit drama, explained
Charlotte almost voted to stop the 2020 Republican convention from coming to town
Thai boys speak publicly for the first time: “This experience taught me to be more patient”
2 Republican senators refute Trump’s Ukraine-Biden conspiracy theory
Julián Castro explains his vision for a “progressive” foreign policy as president