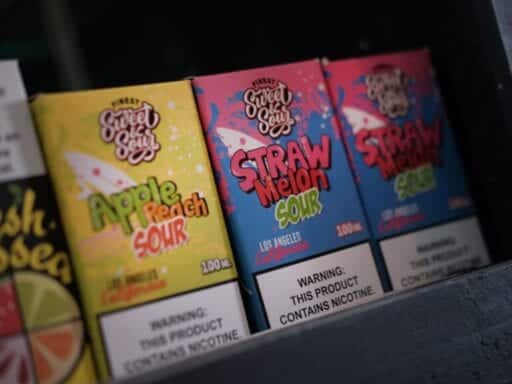 Share
Loading...
Experts say that some vape products use flavors and chemicals that are tested for ingestion, but not inhalation. | Spencer Platt/Getty Images

In the past two months, a sudden outbreak of vaping-related illnesses has placed e-cigarette use under a critical spotlight. Millions of American adults vape, and a subset gravitate to online communities to share their habit. They congregate on online message boards like Reddit and the comments section of popular YouTube “vape influencers,” discussing their favorite products and flavors.

Inside this vaping community, there is a niche group of vapers who’ve adopted a do-it-yourself mentality when it comes to creating their own vape juice — a flavored nicotine mixture sometimes referred to as e-juice or e-liquid. It’s the modern equivalent of rolling your own cigarettes, except vapers carefully measure out concentrated nicotine, flavored concentrate, and other solvents, and sometimes share these combinations as recipes with one another.

Still, experts who have studied e-cigarette use are leery of the long-term health effects vaping could produce — even when it’s with homemade vape juice. The Food and Drug Administration only started regulating e-cigarettes in the same vein as tobacco in 2016. Many vapers think the future of vaping could be in DIY as federal scrutiny intensifies; whether that practice is as safe and foolproof as some claim, however, isn’t clear to experts.

David Bellows has moderated the subreddit r/DIY_ejuice through several crackdowns by the Food and Drug Administration toward e-cigarettes. He considers this his unpaid part-time internet job, one he’s done since late 2016. But on September 11 — when the Trump administration announced its plan to ban flavored vapes amid a surge of nationwide vaping-related illnesses — the subreddit gained 139 members in one day. It was a surprisingly big jump from its typical 30-ish daily additions, Bellows recalls. The next day, the moderators accepted 336 new users. The day after that was 204.

There was a sudden uptick in interest toward this hobbyist forum, which now boasts more than 51,000 members. This isn’t the first time the DIY vape juice community has seen a surge in interest. It happened in 2016, when the FDA officially started to regulate e-cigarette products. And again last September, when companies were pressured to stop illicit e-cigarette sales to minors, which drove vapers to speculate about an incoming ban.

“A lot of people are discovering our little subreddit because vapers want to keep enjoying their flavors,” says Bellows. Vapers generally flock to the subreddit to seek help on their recipes, ask questions about flavors, and learn about the supposed best practices to mix their own concoctions.

Every day, Bellows and a team of six other Redditors are tasked with moderating these online interactions; they accept new users, police behavior, and work to ensure that unsafe products and recipes are kept off the subreddit, since safety is their top priority, Bellows says.

He keeps an eye out for any risky behavior encouraged in the comments and recipes with oil-based ingredients, which can increase the risk of a person contracting lipoid pneumonia — a health condition that can occur when fat particles accumulate in lungs. In early September, health officials found vitamin E oil in black market marijuana vaping products that were used by victims who developed a lung condition.

“We don’t know much about the long-term effects of vaping,” Bellows admits. Health experts have warned that it may take decades for any diseases possibly caused by e-cigarettes to fully surface and that research on the product is not conclusive.

But he thinks there’s value to this online community, which has accumulated years of DIY knowledge. People are starting to mix their own e-liquids anyway (there are plenty of tutorials on YouTube) and, from Bellows’s perspective, it’s better that they turn to Reddit — where moderators emphasize safety — than going in blind by themselves.

The Food and Drug Administration is currently investigating the surge of vaping-related illnesses nationwide that has so far affected 805 and killed 12 people, some of which appear to be linked by unregulated black market THC products and nicotine-only vape devices. (The CDC reports that it’s unclear exactly what the source of these illnesses is.)

Several states have proposed regulations on flavored e-cigarettes to curb youth vaping in response to the health crisis. On September 25, the e-cigarette giant Juul announced it would suspend all its product advertising in the US and will not be lobbying against the proposed federal flavor ban. (DIY mixers typically don’t vape from Juuls, the most popular e-cigarette manufacturer; the company’s products are tamper-proof and its pods are not designed to be refilled with homemade e-liquids.)

These events illuminate a growing body of research that suggests how vaping could be more harmful than previously realized. And experts — some of whom have spent decades researching e-cigarettes — are frustrated it has taken this long to sound the alarm bells. Why has the FDA allowed for a lax regulatory environment to persist for years? And now that vapers are accustomed to flavored products, how will prohibition solve the nation’s nicotine addiction?

Robert Strongin, a professor of organic chemistry at Portland State University, fears that the flavor ban has come too late. The current outbreak of respiratory illnesses felt inevitable to him, as a researcher who studies the chemistry of e-cigarettes.

“The problem is that companies — not just the DIY-ers — are using chemicals and flavors that are safe for ingestion, but are not tested for inhalation safety,” he told Vox. “There’s little or no data on what’s safe to inhale.”

The flavors that companies and DIY vapers purchase are not specifically made for vaping; they’re typically used to add flavor in baked goods or candy. A study published in the journal Nicotine & Tobacco Research last October found that chemicals within cinnamon, vanilla, and cherry e-liquids reacted with propylene glycol — a popular vape juice ingredient — to form new chemicals, which could irritate lungs over time, The Verge reported. These chemicals are not listed on the ingredients label, and their long-term effects on the human body is unknown.

“The problem is that companies are using chemicals and flavors that are safe for ingestion, but are not tested for inhalation safety”

The sheer diversity of e-cigarette products makes research challenging, Strongin wrote in a recent article on e-cigarette chemistry. There needs to be stricter federal regulations on tobacco and e-cigarette companies, he told me, as all products should be tested for inhalation toxicology before approval.

A paper published last week in JAMA Internal Medicine found extremely high levels of pulegone — a carcinogen that’s harmful when ingested in large amounts — in mint and menthol e-cigarettes. The lead researcher, Sven Jordt of Duke University, told Wired that it’s “a regulatory failure” that the FDA regulates carcinogens in food but not in tobacco.

While the paper focused solely on mint and menthol vapes, it raises questions about how e-cigarette companies — and the tobacco industry at large — have evaded scrutiny for years. As Wired recently reported, “The techniques that protected tobacco in the 1900s, 1960s, and 2000s ultimately led to the unchecked proliferation of under-studied and potentially dangerous new nicotine products now used by millions of American teenagers.”

In a recent Reddit thread, a longtime user urged other DIY vapers to reduce their nicotine ratios to quit.

“DIY is perfect for this because you can go from 3 to 2 to 1 to 0.5 to 0.1 and before you know it the addiction is gone … I have been nicotine-free for several months and I don’t really miss it at all,” wrote the user, who still vapes but without nicotine.

When vapers lower their nicotine dosage, however, researchers found they actually vape more and are less satisfied, says Sharon Cox, a research fellow at London South Bank University’s Centre for Addictive Behaviours Research. E-cigarette flavors can also damage human blood vessel cells even in the absence of nicotine, according to a study of lab-grown cells by researchers at Stanford.

Cox, alongside several UK researchers, conducted one of the first studies that investigated the motivations and practices of DIY e-liquid mixing with 45 participants — mostly men — in 2016. They conducted interviews with participants, had them send in their DIY vape juice samples, and analyzed whether the samples actually contained the nicotine content that mixers intended.

“What [participants] were mixing didn’t differ from commercially available pre-mixed e-liquids,” she told Vox of the sample results. In interviews, vapers said they cared about the quality of their DIY mixes, and warned researchers of a black market of e-cigarette goods online.

While the participants’ mean age was 29, Cox says that a number of the DIY mixers she interviewed were older adults — men in their 40s and 50s who were committed to exploring new flavors and mixing as a hobby. Most said they were drawn to mixing for the flavor novelty, and Cox remarks how DIY culture has built a community for these vapers.

“There’s a DIY community of people that get together and create recipes together and share recipes that use different types of food, baking, and candy flavorings,” said Wayne Walker, a DIY vaper and YouTuber, in an April 2018 video about a potential federal flavor ban.

Walker assured his viewers that even if flavored pods are banned, DIY mixers won’t be affected. (DIY mixers purchase their flavor base from companies like Bell Flavors and Fragrances and Flavorchem, which produce flavor compounds typically used in food and beverages.) While flavored pods might be prohibited, Walker added that the FDA doesn’t regulate personal use of tobacco products, as long as users don’t sell them. (Tobacco products imported for personal use should still meet FDA requirements.)

That’s why Bellows thinks more vapers will be drawn to the DIY scene — especially if flavored pods are taken off the market. It allows them to flexibly experiment and ultimately be in control of what they’re putting into their e-liquids, he says.

“None of the ingredients are difficult to obtain,” Bellows says, emphasizing how there should be age verification to purchase concentrated nicotine for vape juice. “It takes time to get all those supplies through the mail, but with pre-made recipes online, the process is pretty simple.”

Bellows, who has mixed his own juice since early 2015, has tried to gradually lower his nicotine consumption over time. His goal is to get down to no nicotine at all and eventually quit vaping.

Contrary to popular belief, some vapers do claim to want to ultimately quit the habit. As I previously reported for The Goods, many oppose a federal flavor ban since it might drive people away from vapes — what they see as a safer alternative to smoking — while flavored traditional tobacco products and cigarettes are not affected by the proposed ban.

DIY mixing sounds like risky terrain for the unfamiliar, but some vapers see it as a viable and legally sound way to create what they say they need: flavored vape juice. Yet experts like Strongin are wary of flavors, although he blames their proliferation on the FDA and not on the vapers themselves.