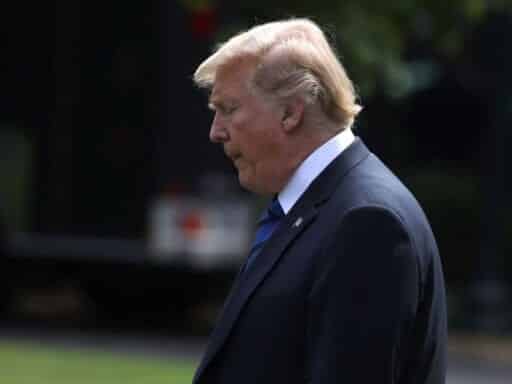 Yes, his base likes him, but his overall numbers are terrible.

Recent polling on President Donald Trump has increasingly been covered in a way that emphasizes Trump’s high numbers with self-identified Republicans rather than his low numbers with the American public.

For example, a new poll released on Monday shows Trump underwater by a 52-45 margin and gives Democrats a 6-point lead in the generic congressional ballot. But it was largely touted for showing that, among Republicans, Trump has a better approval rating than Presidents Dwight D. Eisenhower, Richard Nixon, and George H.W. Bush ever managed to achieve.

In @wsj/@nbcnews poll of Trump, this: “Of the four previous White House occupants, only George W. Bush, in the aftermath of the Sept. 11, 2001, terrorist attacks, had a higher approval rating within his own party at the same point in his presidency.” https://t.co/hqIChGVm8R

In fact, the poll showed about what you would think — partisanship heavily influences evaluations of events, but Trump’s performance at his meeting with Russian President Vladimir Putin in Helsinki was overall very unpopular and likely even hurt him at the margin with his precious base.

American politics has grown more polarized over time. It’s become easier for presidents to maintain the political support of their co-partisans than it was in the days when both party coalitions were regional hodgepodges with little underlying ideological coherence. This, combined with Donald Trump’s personal focus on his base, has enabled Trump to mostly hang on to his GOP supporters.

The truth, however, is that Trump is an unpopular president by historical standards, and his party appears to be suffering predictable consequences.

A useful corrective to these niche polls showing Trump’s appeal to select segments of the electorate is to use FiveThirtyEight’s presidential approval tracker to compare his overall popularity to that of other presidents.

This tells us relatively little about the ultimate judgment of history; looking back, the hideously unpopular Harry Truman is now generally regarded as a great leader. It doesn’t even tell us very much about politics. Ronald Reagan was almost as unpopular as Trump is, but went on to score a landslide reelection, while George H. W. Bush was far more popular than Trump and lost in 1992.

But the big picture is that Trump is not popular. The economy is growing and American soldiers abroad are not dying in large numbers. We would normally expect a president enjoying those conditions to have approval ratings that are pretty good. Trump’s are terrible.

And it seems plausible to attribute those numbers to the all-base, all-the-time refusal to do anything on either a symbolic or a policy level to try to reassure people who aren’t in his base that their worst fears about him are mistaken. Trump’s strength among his base, meanwhile, isn’t a mitigating factor — it’s part of the overall problem. In a divided country, he makes no effort to serve as a unifying figure.

It’s certainly true that Trump’s high numbers among self-identified Republicans help explain why Republican Party elected officials are reluctant to break with him. But events over the past year also underscore that this is a risky strategy.

A huge number of incumbent Republican state legislators in Virginia districts that Hillary Clinton carried lost their seats last November, Sen. Dean Heller (R-NV) is behind in polls with his opponent, and there are 22 House Republicans in blue districts who are now in deep trouble in November.

The saving grace for Republicans is that they face favorable maps in both the Senate and the House that mean they do not need to win a majority of votes, or even come all that close, to hold a majority of seats. That undemocratic electoral majority, much more than any poll result, is the real key to Trump’s hold on his party — and his party’s hold on power.