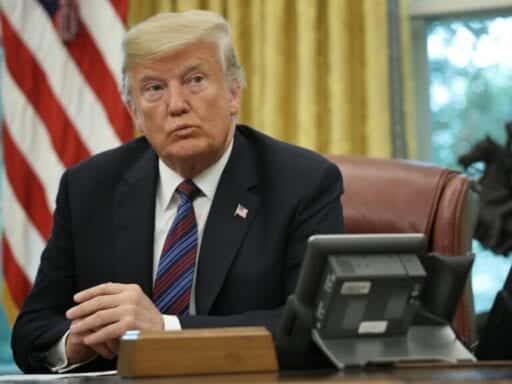 The flag on the White House is already at full mast.

When Sen. John McCain died Saturday of brain cancer, President Donald Trump was expected to follow certain traditions to honor a fallen public servant. He didn’t — suggesting he would continue the longstanding feud between the two men even after McCain’s death.

The death of prominent sitting senators is typically followed by an effusive statement from the White House; the president issues a proclamation to lower flags around Washington, DC, to half-staff, including at the White House, where they traditionally remain until the date of interment. McCain will be buried on Sunday at a cemetery by the US Naval Academy in Annapolis, Maryland.

But in Trump’s Washington, the flag on the White House had already been raised back to its normal height by Monday morning. And in lieu of an official statement, McCain’s death was marked only by a tweet from Trump’s account, which didn’t address the senator’s long career or legacy. Trump reportedly rejected a proposal for an official White House statement that recognized McCain’s long history of public service.

Meanwhile, Trump golfed through the weekend and tweeted angrily about the “Fake News Media,” sports, and his other public enemies. On Monday, he was asked to reflect on McCain’s legacy, and he refused to answer questions. He sat silent with his arms crossed.

Pres Trump declined to answer questions at the end of the announcement. Was asked to reflect on the legacy of Sen. McCain, but declined. Sat silent and cross-armed as press pool herded out of the Oval Office. pic.twitter.com/Yzmqnxq14M

McCain’s legacy — particularly as one of the biggest advocates of the Iraq War — is complicated and controversial. But Trump’s response to the senator’s passing is telling of a much more personal feud between the two men.

Trump disparaged McCain’s service in the military early in his presidential campaign, and McCain did not shy away from denouncing Trump’s actions as president. In the final weeks before his death, McCain said that he didn’t want Trump at his funeral, where former Presidents George W. Bush and Barack Obama will deliver eulogies.

McCain’s death was met with an outpouring of support from lawmakers and public figures from both sides of the aisle — even those who stood in stark opposition to his political positions and policies in the past decades. Senate Minority Leader Chuck Schumer has suggested renaming the Russell Senate Office Building after him.

But the White House’s reaction to McCain’s death was noticeably muted. Trump reportedly refused to comment on McCain’s decision to stop brain cancer treatment and rejected the White House staff’s plans to issue a statement praising McCain’s legacy after he died, saying he preferred to send a tweet. The Washington Post’s Josh Dawsey reported:

Press secretary Sarah Huckabee Sanders, Chief of Staff John F. Kelly and other White House aides advocated for an official statement that gave the decorated Vietnam War POW plaudits for his military and Senate service and called him a “hero,” according to current and former White House aides, who spoke on the condition of anonymity to discuss sensitive internal deliberations. The original statement was drafted before McCain died Saturday, and Sanders and others edited a final version this weekend that was ready for the president, the aides said.

Trump’s tweet acknowledging McCain’s death did not address McCain’s legacy. And on Trump’s Instagram page, a post addressing the senator’s death featured a picture of Trump.

While the flags at the nation’s monuments and Capitol building remained at half-staff, the one on top of the president’s residence was raised to full-staff by Monday morning, days before McCain’s funeral.

Fairly striking image — all of the flags surrounding the Washington Monument are at half-staff, though the flag atop the White House was raised to full staff just after midnight. pic.twitter.com/BwKRbqKk0G

According to Fox News, flags are typically lowered for the passing of sitting senators from the day of death to the time they are buried. The US Flag Code says that flags are to be lowered “on the day of death and the following day for a Member of Congress.” During President Barack Obama’s administration, this procedure was followed after the deaths of three sitting senators, as well as Justice Antonin Scalia. Trump has not issued a proclamation calling for flags to be lowered.

The White House’s seeming indifference to the death of a major figure in Trump’s own party is a clear continuation of a longstanding sour relationship between Trump and McCain. It began notably early in the presidential campaign cycle, when McCain said Trump had “fired up the crazies” in his home state of Arizona, and Trump said he didn’t consider McCain, a former Navy pilot who spent five and a half years in Vietnam as a prisoner of war, where he was tortured, a war hero.

Trump’s attacks on McCain during the presidential campaign were numerous. He’s said that he thinks “John McCain’s done very little for the veterans. I’m very disappointed in John McCain,” and that the veteran senator is “yet another all talk, no action politician who spends too much time on television and not enough time doing his job.” McCain withdrew his endorsement of Trump after the Access Hollywood tape, on which Trump can be heard bragging about sexually assaulting women, was leaked.

After McCain was the deciding “no” vote tanking the Republicans’ Obamacare repeal-and-replace bill, Trump said that the Arizona Republican had done it out of spite — not because of policy. When a White House aide crassly remarked that she didn’t care about McCain’s opposition to Trump’s CIA director nomination because he was “dying anyways,” Trump reportedly told advisers he didn’t care if the aide apologized. When Trump signed the defense bill named after McCain this month, he didn’t mention the Arizona senator in his remarks about the policy.

McCain repeatedly made clear digs at Trump both during the campaign and after Trump was elected, mocking him for avoiding the Vietnam War draft and calling his movement “half-baked, spurious nationalism cooked up by people who would rather find scapegoats than solve problems.”

And in one sense, McCain will have the last word: The sitting Republican president will not be at the funeral of one of the most prominent Republican politicians this Saturday — an absence that clearly shows Trump’s fraught position in his own party.

The Kentucky Senate primary showcases the 2 theories of how to beat Mitch McConnell
Why the Kevin Hart Oscars backlash is different from other recent public shamings
As our April book club pick opens, New York City is born. What happens next?
7 questions about The Witcher you were too embarrassed to ask
One Good Thing: After the NBA walkout, the movie of the week is Netflix’s High Flying Bird
Vox Sentences: Google’s $90 million payout to Andy Rubin