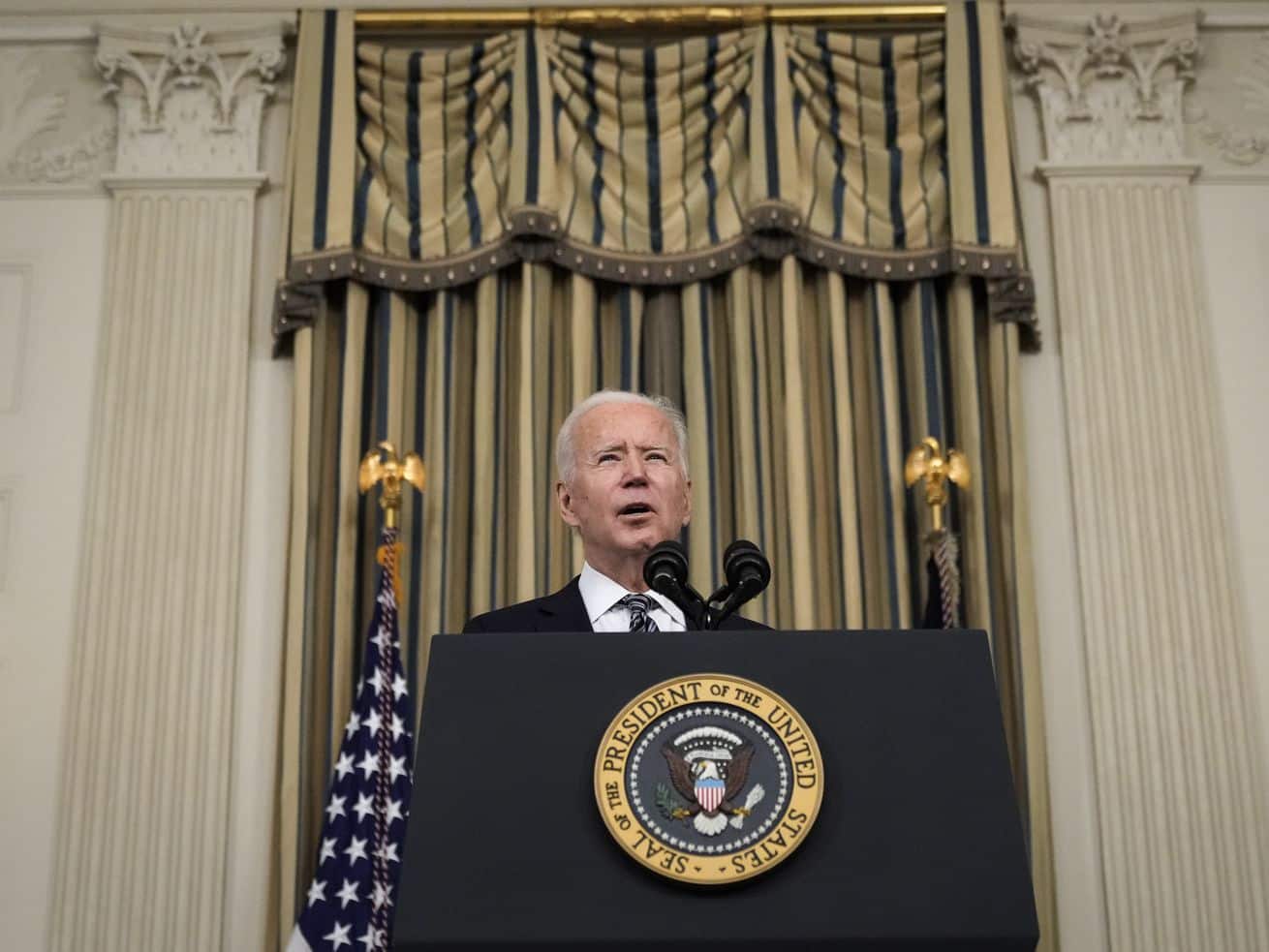 The letter for lawmakers comes from a left-right coalition increasingly skeptical of the use of US military force.

A left-right coalition of antiwar and pro-military restraint groups have a message for members of Congress: Make President Joe Biden seek authorization before launching lethal strikes like the ones in February.

Last month, the Biden administration bombed two facilities in eastern Syria used by Iranian-backed militias, in retaliation for recent militia attacks against US troops in nearby Iraq.

Lawmakers from both parties — but particularly Democrats — denounced the strikes almost immediately, saying the US is not at war with Syria and that Congress didn’t approve any attack on Iranian-backed militants.

The Biden administration, of course, didn’t agree. It argued that Iranian-backed proxies threatened US troops, and thus that Biden has the right under Article II of the Constitution to use force to defend those troops.

But that justification didn’t sit well with those who’ve long wanted Congress to assert its role in decision-making on America’s wars. And now they’re calling on Congress to do something about it.

In a letter to Congress shared exclusively with Vox, two dozen organizations across the political spectrum — from progressive foreign policy groups to conservative think tanks — are calling on lawmakers to pass a new War Powers Resolution “to make clear that the Executive Branch’s strikes in Syria on February 25, 2021, were not authorized, and nor would be similar actions.”

“If Congress doesn’t act to rebuke and prohibit this illegal action, this precedent could be cited to defend unauthorized military action essentially anywhere in the world, against nearly any group, and at virtually any time, as long as an administration declares that U.S. interests are threatened by the targeted group at some moment in the past or in the future,” the letter says.

The letter, expected to be sent to lawmakers as soon as this week, will likely add more urgency to the growing push in Congress to curtail the president’s war powers — a push the White House has so far signaled it supports.

Together, this left-right grouping — organized by Demand Progress, Just Foreign Policy, and Concerned Veterans of America — argues that the Biden administration’s legal case for the strikes is flawed.

Under Article II of the Constitution and the 1973 War Powers Act, the signatories write, the president’s legal authorities to take military action without first receiving formal approval from Congress “apply only to a narrow set of situations where the imminent and extreme nature of the threat makes it impractical or impossible to convene Congress in a timely fashion that would enable the necessary defensive actions.”

The signatories say there was nothing “imminent” or “extreme” about the threat to US troops from Iranian-backed militias when the Biden administration launched the Syria strike on February 25. Though the Pentagon said US troops in Iraq had already been targeted in three separate rocket attacks that month, the last one — the attack in Erbil that killed a Filipino contractor and injured several US troops — took place 10 days before the US took action.

This, the letter argues, “demonstrate[s] that there was ample time to permit Congress to exercise its duty to authorize military action.”

The letter also notes that after the US strike, there was another attack on US troops in March — this one on al-Asad airbase in western Iraq — which many suspect was perpetrated by those same Iranian-backed proxies.

But rather than seeing that as evidence that, as the Biden administration asserted in justifying the strike, US troops were in fact at imminent risk from an ongoing attack by these militias, the letter’s signatories argue that the US strike provoked the attack.

They cite a recent Just Security article by Oona Hathaway, a professor at Yale Law School and former Pentagon lawyer, arguing that “Self-defense is not really self-defense if instead of preventing a threat, it precipitates it.”

It’s still officially unknown, however, who launched the March attack on al-Asad air base and whether it was conducted either in response to America’s retaliation or as part of the weekslong campaign against US troops.

Still, for this and other reasons, the signatories insist the strike was “patently unauthorized, illegal, and unconstitutional” and demand that lawmakers “immediately introduce War Powers Resolutions to prohibit any future unauthorized attacks of this kind.”

“Their brazen claim of Article II authority to strike any group, in any country, could establish a precedent that would completely defeat the purpose of [AUMF reform],” said Hadiya Afzal, an organizer at Just Foreign Policy who orchestrated the letter effort. “Congress must consistently defend its war powers and reject unauthorized military action — regardless of who is in the White House.”

The question now is if lawmakers will listen to what the cross-ideological group has to say. The likeliest outcome is that the letter will fuel a growing war-powers argument over the next few months.

A war powers debate has already started in Congress

Several past presidential administrations have relied on two authorizations for the use of military force — known as AUMFs — to carry out military operations in Iraq, Afghanistan, Somalia, and Syria. The 2001 version greenlit the fight against al-Qaeda in Afghanistan after 9/11, and the 2002 iteration gave Bush Congress’s blessing to invade Iraq — a measure then-Sen. Biden voted for.

Since then, Republican and Democratic administrations have broadly interpreted those authorizations as giving the US permission to, among other things, hunt down terrorists around the world, including assassinating Iranian Gen. Qassem Soleimani in Iraq. However, presidents still said they held the ultimate authority to wield the military as needed in their role as commander in chief.

Biden, on the other hand, has so far signaled he’d support an effort in Congress to repeal those authorizations and replace them with an updated — and likely more limited — version.

“We are committed to working with Congress to ensure that the authorizations for the use of military force currently on the books are replaced with a narrow and specific framework that will ensure we can protect Americans from terrorist threats while ending the forever wars,” White House press secretary Jen Psaki said in a March 5 statement to Politico later posted to Twitter.

We are committed to working with Congress to ensure that the authorizations for the use of military force currently on the books are replaced with a narrow and specific framework that will ensure we can protect Americans from terrorist threats while ending the forever wars.

That announcement came just two days after Kaine and Sen. Todd Young (R-IN) introduced a bill that would repeal the 2002 AUMF and a 1991 measure that paved the road to war with Iraq. “Congress has a responsibility to not only vote to authorize new military action, but to repeal old authorizations that are no longer necessary,” Kaine said in a statement.

But some critics said that new, more targeted authorizations would still let Biden or any future president bomb when and where they saw fit. That’s partly why Rep. Peter DeFazio (D-OR), for example, reintroduced his War Powers Resolution shortly after the White House said Biden was open to an AUMF discussion.

“This is a great step, but Congress must also prevent any president from avoiding the constitutional obligation to seek congressional authorization before introducing US forces into hostilities — which my legislation would do,” he said in a statement.

Some of the groups who signed the letter, like Demand Progress and Just Security, backed DeFazio’s move. As of now, there’s no indication his resolution will make it through Congress, or even be brought up for debate, but it goes to show that there’s a serious war-powers drive already.

How Canada lifted nearly 300,000 kids out of poverty in a single year
The case for optimism on Covid-19, in 2 charts
The Reason I Jump expands a bestselling book about autism into a sensitive, immersive film
The dust-up over Elizabeth Warren’s private legal work, explained
“Extinction breeds extinctions”: How losing one species can wipe out many more
Health experts call for the vice presidential debate to be canceled or made virtual