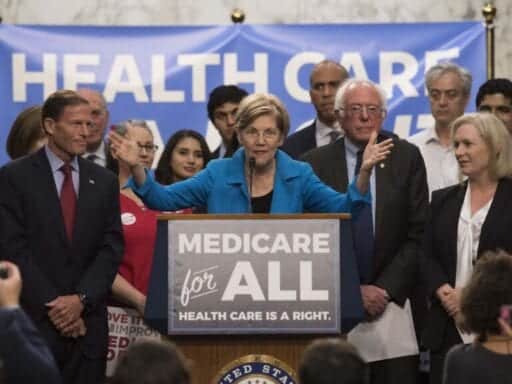 Warren claims she can do it without raising middle-class taxes.

On Friday, Elizabeth Warren released her Medicare-for-all financing plan. After being attacked at the last Democratic debate for refusing to admit Medicare-for-all would require middle-class tax hikes, Warren wants to show that you can pay for the plan without them.

And you can. Maybe.

Warren’s financing plan has two parts. The first describes her approach to estimating the costs of Medicare-for-all. The second lays out the way she pays for the plan without, in her words, “one penny” of middle-class tax increases.

As befits Warren’s wonkish, master-of-plans persona, she’s relied in both cases on top experts. Her cost estimate was conducted by Don Berwick, the former director of the Centers for Medicare and Medicaid Services; and Simon Johnson, the former chief economist at the World Bank. Her tax plan was developed by Betsey Stevenson, who served as chief economist at the Labor Department; Mark Zandi, the head economist at Moody’s Analytics; and Johnson. Helpfully, her plan is backed up by two detailed appendices laying bare, and arguing for, the assumptions Warren makes.

So let’s take them in turn.

How much will Medicare-for-all cost? No more than the current system, she says

In pricing out Medicare-for-all, you’re pitting two opposing forces against each other. On one side of the ledger, Medicare-for-all gives every legal resident — and, in some versions, nonlegal residents — insurance that covers everything with no deductibles, co-pays, or other forms of cost-sharing. That’s going to send health costs shooting skyward.

“We have an enormous amount of evidence that leaves no doubt in any sensible person’s mind that getting rid of cost-sharing provisions increases demand for, and use of, health care,” says Amy Finkelstein, an MIT economist who has studied coverage expansions extensively.

On the other side of the ledger is the savings the government can wring out of the health system by setting the prices doctors, hospitals, and pharmaceutical companies can charge and by simplifying administration. Given that every other developed country in the world achieves universal coverage at far lower per-person costs than America, we have ample evidence that it is possible to cover everyone with high-quality health care for much, much less than America pays now.

Warren’s team begins with a recent estimate produced by the Urban Institute, which concluded that a generous single-payer system would cost $59 trillion over 10 years — a $7 trillion increase over what we’d spend in the absence of reform. Driving that figure is Urban’s estimate of a nearly 14 percent increase in health care utilization, which overwhelms the assumed savings.

In effect, Warren’s team accepts Urban’s estimate for utilization, but it dials up the estimates for savings. The key differences:

Add all this up and Warren’s team projects national health expenditures of $52 trillion over 10 years — exactly what’s projected in the absence of single-payer. Therefore, Berwick and Johnson conclude, Warren’s proposal would “cover every single resident of the U.S. with much more generous coverage and virtually no cost-sharing at a total cost just under the amount the U.S. is currently set to spend on health care under our existing system.”

How Warren pays for Medicare-for-all

Between federal, state, and local governments, most US health spending is already publicly financed. Warren shunts all that money toward Medicare-for-all, leaving a $20.5 trillion hole over 10 years.

Warren does the same with employer spending. Under the Affordable Care Act’s employer mandate, all workplaces with more than 50 employees have to purchase health care or pay a fee. Warren simply takes the money they’re spending now and redirects it to Medicare-for-all. To sweeten the deal for employers, she shaves their contribution by 2 percent — so whatever they’re spending on private health insurance, they send 98 percent of that to the government.

There’s wide variation in the quality of insurance employers purchase, and this plan has the consequence, at the outset, of punishing employers who purchased better insurance for their employees — now they’re paying more than stingier competitors, but without any recruiting benefit. Over time, Warren says she’ll adjust all employers to the same level, though the details of how that will work are sparse.

There’s an even worse inequity for employers with fewer than 50 employees. They’re not required under law to provide health insurance, but a bit over half do. Warren’s plan says that small businesses “would be exempt from the Employer Medicare Contribution unless they are already paying for employee health care today.” That’s a fairly direct penalty to small businesses that offer health insurance today: They have to keep paying a cost their competitors have dodged, but paying that cost no longer gives them an advantage in hiring.

Altogether, holding the employer contribution constant gets Warren almost $9 trillion. What comes next reads like a grab-bag of tax hikes and policy changes, but taken together, it’s an ambitious tax and immigration agenda even if it weren’t connected to Medicare-for-all:

Together, those changes would raise $20.5 trillion over 10 years, financing the rest of Warren’s projected Medicare costs.

The fight to end all fights

Bob Laszewski is president of the consulting firm Health Policy and Strategy Associates, and he’s either worked in or studied the American health care system for 47 years. What we have, he says, is “a health care industrial complex,” a rival in both size and might to the military-industrial complex President Dwight Eisenhower warned of. And Warren is taking the entire thing on simultaneously.

Every dollar in waste or pricing is somebody’s profit, job, or loan repayment. It makes the kinds of pricing cuts Warren wants to make, at the speed she wants to make them, incredibly difficult. “The health care industrial complex has grown with unfettered, unregulated access to cash,” says Laszewski. “Look at a picture of your hospital from 20 years ago. Look at it compared to this campus you have today. If you crank the reimbursement rates, it’ll be like slamming on the brakes on an 18-wheeler going down the interstate.”

To pass the Affordable Care Act, President Barack Obama and the Democrats tried to systematically neutralize potential sources of industry opposition. They cut deals with the insurance industry, the pharmaceutical industry, the hospital industry. They tried to limit disruption as best they could. Those deals might not have been their ideal policy, but they were working in the shadow of Bill Clinton’s failed 1994 reforms, which collapsed under an industry onslaught, among other problems.

Warren’s courting the fight Obama dodged. “In 2017 alone, health industry players whose profiteering would end under Medicare-for-all unleashed more than 2,500 lobbyists on Washington,” she writes. “These industries will spend freely on shady TV ads and lobbying to convince people that a program that saves them massive sums of money will somehow cost them money.”

There are places where I find Warren’s math or ideas a bit optimistic. I’m skeptical that payment reforms will save trillions. I think you can move the system to a lower price structure, but it probably has to happen slowly, gradually, which will jack up the initial cost of the plan. I suspect Medicare-for-all will be harder to administrate than Medicare is now, particularly in its early years. The unintended inequities of her employer financing plan seem like both a political and practical problem. If you’re going to cut drug prices that dramatically, at least some of the money should be used to boost innovation in a targeted, sustained way — we want drugs to get better, not just cheaper. And no one really knows how quickly health spending will grow. (One other note: Warren says she’ll unveil a transition plan in the coming weeks, but I don’t yet know what’s in it.)

There’s another set of problems Warren doesn’t address around supply. So far, Warren and others have treated the expanded utilization as a cost problem. But it’s also a supply problem. Warren promises repeatedly that you’ll be able to see the doctor and go to the hospital of your choice, but if your doctor is overwhelmed by patients or your hospital can’t schedule your surgery for six weeks, it’s not going to feel that way. A plan that does this much to increase demand for health services needs to do some thinking about how to increase supply — ideally, we’ll need more doctors, nurse practitioners, and so on. In polling I’ve seen, and having been around the health care debate for years, I suspect that the attack line with the most potency, is the dread specter of waiting lines.

Still, there’s no doubt that if you could force enough change on the system, and you could convince people to hold on through the disruptive transition, we could have a system that covered everyone for less than we pay now. We see it in all our competitor nations. At the core of Warren’s case is the simple idea that a much better health system is possible, and on that, she’s right.

But what lies between here and there is the same set of political problems that have bedeviled reformers for the last 100 years. Which is why, of all the assumptions and gambles embedded in Warren’s plan, it’s the animating political theory that is the most significant: Like Bernie Sanders, she intends to pass health reform by running over the health care industrial complex and every corporation and billionaire in America.

This, I’ve come to think, is what the Democrats are really arguing over when they debate Medicare-for-all. Sanders and Warren believe the path to reform is a program big enough to inspire the American people to dismiss the cries of opposition. The compromises you make to calm backlash are also compromises that disillusion your own supporters. The more traditional Democrats on the stage, like Biden, Klobuchar, and Buttigieg, argue that you can’t take every special interest and corporation on at once, or you’ll never pass anything through Congress. In their view, it’s not that more incremental plans are better than more ambitious plans, but that plans that can pass are better than plans that will fail.

But Warren’s view on this is clear. “You don’t get what you don’t fight for,” she says. And she wants the fight.

Online shopping has boomed in the pandemic. But what about all the packaging?
Mississippi and Iowa join the ranks of states reopening nonessential businesses
Trump is postponing the Putin visit until after the “Russia witch hunt”
Goop was fined $145,000 for its claims about jade eggs for vaginas. It’s still selling them.
Members of Congress want to know more about law enforcement’s surveillance of protesters
Justice Ruth Bader Ginsburg underwent cancer treatment for the second time in a year