Even most Republicans want to keep Roe v. Wade 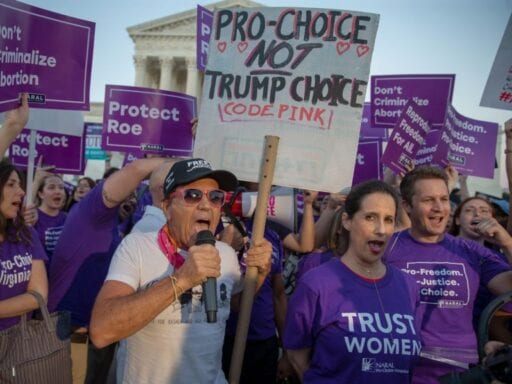 A new Wall Street Journal/NBC News poll has support among all voters at 71 percent.

Democrats are making Roe v. Wade a central theme in their opposition to Brett Kavanaugh’s nomination to the Supreme Court. And it might not be a bad strategy, if a recent poll is any indication.

Support for Roe v. Wade is overwhelming among both Democrats and independents: 88 percent and 76 percent, respectively. But even a majority of Republicans — 52 percent — don’t want to see the court ruling overturned.

That’s a gap that’s been widening since 1991, according to the Wall Street Journal. Margins are also opening up among voters who say they support pro-abortion rights candidates: 44 percent of voters, versus 26 percent who preferred anti-abortion candidates.

The WSJ/NBC News poll questioned 900 registered voters from July 15 to July 18, with a margin of error of 3.27 percent.

This latest survey mirrors other polling that suggests the majority of Americans do not want to roll back abortion rights — even as Kavanaugh’s nomination to the Supreme Court makes it more likely than it has been in decades that Roe (and Casey v. Planned Parenthood, the 1992 decision that partly affirmed Roe) could be reversed or gutted. Justice Anthony Kennedy, whom Kavanaugh would replace, served as the conservative swing vote on the court, but he often sided with the liberal wing when it came to social issues, including abortion access.

As Vox’s Dylan Matthews wrote, Kavanaugh’s presence on the Court could definitely put Roe at risk:

Matthews points out that this is clearly a dodge: As a DC Circuit judge, Kavanaugh has to honor the precedent of the Supreme Court. As a Supreme Court justice, not so much:

Kavanaugh, of course, will face lots of questions about his stances on these cases during his confirmation hearing — though he’ll likely refrain from answering, as is the growing tradition among Supreme Court nominees.

But so far, voters don’t seem completely sold on Trump’s SCOTUS pick. Just a third of voters — 32 percent — support Kavanaugh’s nomination to the bench, according to the poll. Slightly less — 26 percent — are opposed. Another 41 percent said they don’t have enough information yet about Kavanaugh, which means Republicans, Democrats, and Kavanaugh himself still have room to make their case to the American people.

An ode to Adventure Time, one of TV’s most ambitious — and adventurous — shows
Live results for the Connecticut primary elections
Ryan Zinke to the oil and gas industry: “Our government should work for you”
Andrew Cuomo is facing an extraordinary rebuke from his own party
Andrew Cuomo has a plan to start reopening New York — eventually
Facebook is like sugar — too much is bad for you, says a top Facebook exec