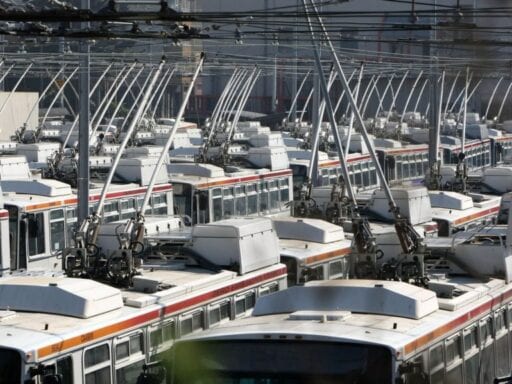 It is now more or less taken for granted that solar panels are getting cheaper and cheaper. But that didn’t just happen — solar PV did not jump onto that trajectory on its own. After all, solar panels have been around for decades, but they didn’t really start plunging down the cost curve until the mid- to late-2000s.

Germany deserves some credit for creating demand with its aggressive feed-in tariffs. President Barack Obama and the Democrats deserve some credit for creating demand with the 2009 stimulus bill. But the lion’s share of credit goes to China, which, rather than fiddling with tax breaks and credits and “market mechanisms,” invested a boatload of money into production subsidies, scaling the industry up by brute force.

China’s wild binge of solar manufacturing drove down the costs of panels, both by oversupplying the market and by hastening economies of scale. In effect, the country voluntarily took on the costs of pushing solar panels onto the “S-curve” of rapid growth, a strategy that will greatly benefit the Chinese — and the rest of humanity.

Now there’s evidence that China is in the midst of doing the same thing for another key clean-energy product: electric buses.

Battery-electric buses (BEBs) are important to the clean-energy transition for a number of reasons.

Most significantly, diesel pollution is a scourge in cities everywhere and BEBs are emission-free. Also, buses travel on fixed, predictable routes and are thus good candidates for electrification. And BEBs, which are quieter, more spacious, and more high-tech than their competitors, serve as great ambassadors for EVs more generally.

But they are still a nascent technology; they haven’t hit the steep upward slope of the S-curve yet. For city and county authorities, the decision between BEBs and diesel or natural gas buses is still agonizingly difficult, involving considerations about infrastructure, interoperability, lock-in, and lifecycle analysis that are new to many of them.

So the market needs a kick in the pants to really get moving. And it looks like China is providing it.

The rapidly growing megacity of Shenzhen, China, was choked with diesel pollution in the early 2010s. Though buses were just 0.5 percent of the city’s vehicles, they were responsible for 20 percent of the air pollution.

So, as the World Resources Institute recounts, Shenzhen electrified them. All 16,359 of them. It took only a few short years:

That right there is a miniature S-curve. Shenzhen now has the worlds largest fleet of BEBs.

It got there through some cleverness — they planned out charging infrastructure and pushed manufacturers to offer lifetime warranties on batteries — but mainly through government subsidies, which covered up to half the upfront cost of the vehicles.

A similar story played out nationally over the same time frame. This remarkable graph is from a recent report on BEBs from Bloomberg New Energy Finance (BNEF):

In 2013, China was bopping along with 1,700 BEBs. Around then, it realized that its rapidly expanding urbanization could not continue to rely on diesel buses, lest it make an already crippling air-pollution problem even worse.

So it decided to make electric buses a thing. How? By dumping a giant pile of money on the problem, subsidizing the purchase of more than 350,000 BEBs in the following four years. Battery and hybrid electric buses went from 0.6 percent of annual bus sales in the country to 22 percent in 2017. They now constitute 17 percent of the nation’s total bus fleet.

Today, of the roughly 385,000 BEBs that BNEF estimates are operating in the world’s cities (13 percent of the global bus fleet), 99 percent — virtually all — are in China. The country has, in a few years, taken electric buses from a niche product to a decent-sized chunk of the global market. Costs are already falling.

The cost calculation on electric buses is changing quickly

BNEF runs the numbers — not only on upfront costs but on total cost of ownership (TCO), including operating and maintenance costs — on a range of buses with different sized batteries in different cities with different costs of diesel and electricity. I won’t go through all the details. Suffice it to say, in many cities, lifetime costs are already lower for BEBs than for diesel buses. But it’s a complicated calculus.

One key factor in TCO is how far the bus is driven. The farther it goes every year, the better BEBs look:

That means big cities with long routes can already save enormous amounts by transitioning to high-capacity BEBs.

But the calculus will get simpler. Based on current cost trends and BNEF’s calculations, total cost of ownership for BEBs will be lower than for diesel buses in almost every city, under almost every foreseeable circumstance, within two or three years — especially if profitable uses can be found for BEB batteries after they are no longer suitable for vehicles.

However, most cities do not make bus purchases on the basis of TCO. They have to deal with upfront costs — sticker prices. And almost everywhere, BEBs are still more expensive up front, by anywhere from $100,000 to $300,000.

Some of that upfront cost barrier can be overcome with clever financing. Different cities are experimenting with leasing the buses, or in some cases, buying the buses but leasing the batteries. BNEF also suggests that development finance institutions could offer low-interest loans.

But bringing down the sticker price is the ultimate guarantor of market success, and the big driver there is battery costs.

BNEF assumes that the other parts of the bus have already gotten as cheap as they can (a questionable assumption, if you ask me), which means that battery costs make all the difference. Luckily, battery costs are falling.

As costs continue to decline, BNEF expects demand for batteries to skyrocket:

(That swooping slope up and to the right is the beginning of the S-curve for EVs.)

If bus batteries decline in cost at the same rate EV batteries historically have, BNEF estimates that upfront costs for electric buses will dip below diesel buses around 2030. That seems like a long time to wait.

However, BNEF notes that rising BEB demand could drive bus-battery costs down faster, which could move upfront costs below diesel between 2025 and 2027.

Basically, costs will decline, and upfront cost parity will get closer, the faster BEB demand rises. It seems to me that the shocking explosion of demand in China is good reason to believe that even BNEF’s optimistic demand forecasts are conservative — but we shall see.

Other cities are beginning to get on the BEB bandwagon as well. Late last year, 13 cities, representing 80 million people and around 60,000 buses, signed the C40 Fossil Fuel Free Streets Declaration, pledging to purchase only zero-emissions buses from 2025 forward.

“Many signatory cities have targets that exceed the ambition of the declaration,” BNEF writes. “Paris aims to electrify all of its 4,500 buses by 2025, Copenhagen has committed to procure only zero-emission buses from 2019, and Los Angeles has the same target for its fleet of 2,200 buses by 2030.”

11/ With all the focus on passenger vehicles, it’s easy to miss what’s going on in other segments. E-bus adoption is going to go quickly. pic.twitter.com/wu8y0OwkZ0

Every forward-looking city that adds to BEB demand in the short-term, slipstreaming behind China’s lead, pushes demand up faster and thereby pushes costs down faster. And if early experiments prove a success, the hundreds of other growing cities in the world suffering from diesel pollution could follow suit, ahead of schedule. (India, a huge potential market for BEBs, is choking on diesel as we speak.)

I would not be at all surprised if we look back in 10 years and see clearly that China, almost single-handedly, forced BEBs onto the S-curve of accelerated development. Thanks, China!

I do not mean to glorify China or to hold it up as a model. I prefer, y’know, democracy. But I do think there is something to learn from the country’s recent successes in clean energy.

Economists are inclined to frown on the strategy of dumping giant piles of government money onto budding technologies that are in need of scaling up. They prefer market mechanisms, tech-neutral incentives, and nudges that maximize the free choices of market participants. In any economic model, such policies will perform better.

And that’s well and good. But sometimes problems are big and urgent, you need scaled-up solutions quickly, and you just don’t have time to mess around. China didn’t nudge its solar industry, it kicked it in the pants. Now it’s doing the same to the BEB industry.

As economists will rush to point out, there have been enormous inefficiencies and waste along the way, money lost on graft or junk technology. Solar has often been poorly installed or curtailed. According to BNEF, some 43 percent of the BEBs allegedly produced in China in 2015 were basically fraudulent. (It’s factored into the graph above.) That’s insane.

There are undoubtedly lower-cost routes to scaling up solar or BEBs, all kinds of policy mousetraps that economists could design on a whiteboard to outperform the ugly reality. China could have waited for Western technocrats to fiddle around on the margins until the same cost reductions were achieved, but who knows how long that would have taken. The country rightly recognized that the problems (coal and diesel pollution) are intensely urgent and it’s not that huge a mystery how to solve them.

Whatever the full solution is, it’s pretty obvious solar PV and electric buses are going to be a big part of it. The sooner those technologies can be made cheap, the more time human beings as a species will have to enjoy their benefits.

So China set out to make them cheap as fast as possible by dumping a bunch of money on them.

Twenty years from now, 50 years, 100, do you think anyone will care about the elegance or cost-effectiveness of the transition from coal to solar power, or from diesel to electric buses? Will anyone look back in regret that it was done too quickly and crudely?

I doubt it. Amortized over the next 50 to 100 years, the next several generations of humanity, the cost of transition are a screaming deal at almost any price. It’s just a matter of learning (or perhaps relearning) to take a long-term view of human interests — to be a “good ancestor,” as they say.

Though the US seems to have lost the ability for long-term planning, it is still vastly richer than China on a per-capita basis; it could certainly afford to brute-force the clean-energy transition forward at a faster pace.

The politics are much trickier here, obviously, but the American people have proven capable of great things when called to purpose. There’s no reason we couldn’t turn our fabulous wealth and endless ingenuity toward, I dunno, microgrids or hydrogen fuels or small modular nuclear or floating wind turbines and make them a thing.

We can engineer beneficial technology transitions on purpose. It’s been done.

Poll: Most Americans support a path to citizenship for undocumented immigrants
House managers: Trump poses an “immediate threat to the nation and the rule of law”
Carmen Maria Machado’s new memoir is a portrait of a relationship in fragments
Donald Trump vs. JPMorgan CEO Jamie Dimon, explained
Is it time to do away with job applicant drug testing?
4 new movies that explore — or predict — a year dominated by a pandemic