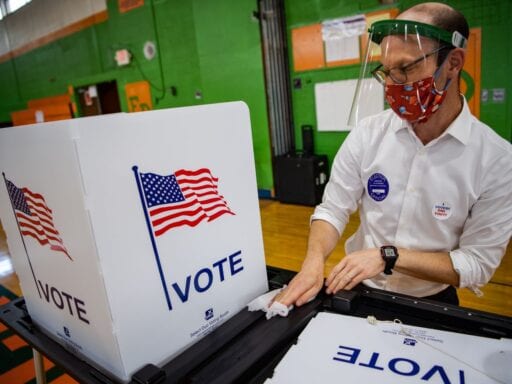 Share
Loading...
A volunteer disinfects a booth after voters cast their ballots during the primary in Detroit, Michigan, on August 4. | Salwan Georges/Washington Post/Getty Images

Michigan gave Trump a crucial win in 2016. Polls continue to indicate this election could be different.

A poll from Research Co. taken from October 31 to November 1, and released on Monday found Biden leading in the state with 53 percent support compared to Trump’s 45 percent — an 8 percentage point advantage heading into the election.

The three polls found Biden leading Trump among urban and suburban voters, independent voters, and undecided voters, while Trump led Biden in the state’s more rural areas. And they reflect Biden’s polling averages, both in the state and nationally. In Michigan, FiveThirtyEight’s polling average puts Biden ahead of Trump by 8.1 percentage points, and the site puts Biden’s average lead in the national polls at 8.5 percent.

Michigan will be a particularly crucial state in the election because of its relatively high number of electoral college votes (16) and its position as a potential tipping point state. And while the polls show strong support for Biden, his win is not a given: The state has proven unpredictable before. In 2016, for instance, Trump defied expectations and defeated then-Democratic nominee Hillary Clinton in Michigan by an incredibly slim margin: just 10,704 votes.

That close call explains why both campaigns have invested heavily in the state in the lead-up to Election Day, despite the fact that Michigan polls have held relatively steady for Biden in recent weeks. Trump has made the state a central part of his flurry of rallies ahead of Election Day — with six stops in Michigan between Sunday and Monday. Biden, meanwhile, has worked to secure the state for himself with late rallies featuring joint appearances with former President Barack Obama.

The Detroit event marked the first time Obama has campaigned in person alongside his pal and former vice president, and Obama emphasized the race’s significance: He called the election “the most important election of our lifetimes.”

These latest results don’t mean, however, that there’s no path for Trump to win Michigan — or to retain the White House, overall: As Vox’s Andrew Prokop notes, it is possible that the polling is off in a manner that benefits Trump. State polling issues — while not far outside the normal range of error — contributed to the perception that Trump was behind in 2016. As Vox’s Matthew Yglesias has explained, these problems have largely been corrected, but other issues creating inaccuracies could crop up.

That said, polling suggests that Trump has a large hurdle to overcome in Michigan. Because of this, many eyes are on Pennsylvania given Biden has a narrower lead (averaging 4.8 percent) and because of its 20 Electoral College votes. This had led to the perception, Prokop notes, that it is the high value swing state that Trump may have the best likelihood of winning.

So as things stand, Michigan looks good for Biden. But as the nation learned emphatically in 2016, poll predictions aren’t foolproof. And that year’s results in Michigan, in particular, remind us, it ain’t over until all the votes are in.