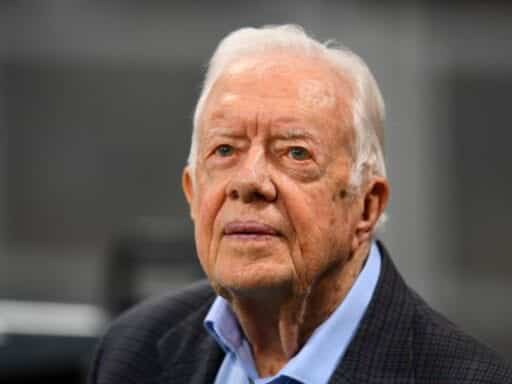 As allegations of voter suppression continue to rock Georgia’s gubernatorial election, current Georgia secretary of state and GOP gubernatorial candidate Brian Kemp has been criticized for remaining in office as he runs against Democrat Stacey Abrams. Now, former President Jimmy Carter has joined a growing group of voting rights advocates and Abrams’s campaign in calling for Kemp to leave office before Election Day over a potential conflict of interest.

In an October 22 letter obtained by the Associated Press, the former president says that Kemp’s resignation is necessary to restore confidence in the state’s election. “One of the key requirements for a fair and trusted process is that there be nonbiased supervision of the electoral process,” Carter wrote, urging Kemp “to step aside and hand over to a neutral authority the responsibility of overseeing the governor’s election.”

Carter adds that Kemp stepping down “would be a sign that you recognize the importance of this key democratic principle and want to ensure the confidence of our citizens in the outcome.” The former president, who served as governor of Georgia in the 1970s, Endorsed Abrams in August, appearing with her at an event last month.

Carter’s letter comes as Kemp, whose office oversees voting and elections in Georgia, continues to face allegations of voter suppression and calls for his resignation from Abrams’s campaign and voting rights advocates.

In recent weeks, Georgia has attracted national attention for a number of measures and practices that voting rights advocates say are aimed squarely at decreasing minority turnout in a close contest. Kemp’s own comments have only fueled the fire, with Rolling Stone reporting on leaked audio of Kemp complaining about increased voter turnout this election cycle. During an October 23 debate against Abrams, Kemp said that he will not recuse himself if the election requires a recount.

“Popular confidence is threatened not only by the undeniable racial discrimination of the past and the serious questions that the federal courts have raised about the security of Georgia’s voting machines, but also because you are now overseeing the election in which you are a candidate,” Carter wrote. The Kemp campaign did not immediately respond to the AP’s request for comment on the letter. Vox has also reached out to the Kemp campaign for comment.

Kemp’s position as secretary of state has been the source of ongoing criticism in recent months, as voting rights advocates argue that he should not be overseeing election he is running in.

Those issues became a national topic on October 9, when the Associated Press reported that 53,000 voter registrations, 70 percent of them from black applicants, were being held by Kemp’s office for failing to clear an “exact match” process that compares registration information to Social Security and state driver records.

Days after that, a coalition of civil rights groups filed a lawsuit calling for the end of the exact match program. Kemp’s office has defended the pending registrations, saying that voters will still be able to cast a ballot if they present identification at the polls.

There have been other issues as well, most notably when it comes to the high number of voters purged from voter rolls in the state. According to the Brennan Center, Kemp’s office purged roughly 1.5 million registered voters between the 2012 and 2016 elections. The AP reports that 670,000 voters were purged last year. A recent report from American Public Media finds that around 107,000 of these voters were purged due to a controversial “use it or lose it” law that removes voters from the rolls if they don’t vote for a certain amount of time.

Kemp has countered that much of the criticism of his office is misplaced, and that Abrams and other Democrats are attempting to hurt his campaign by “faking outrage for political gain.” Kemp added, in a recent press release, “Despite any claim to the contrary, it has never been easier to register to vote in Georgia and actively engage in the electoral process.”

Carter’s letter does not specifically reference these issues, but does point to recent comments from federal courts about Georgia’s election system, one of a handful of states that fully relies on electronic voting without any independent paper ballots, which election security experts say is more susceptible to electronic hacking.

In September, US District Judge Amy Totenberg ruled that Georgia could not be forced to adopt paper ballots before the election, but said there was “a mounting tide of evidence of the inadequacy and security risks” in the state’s system. In October, the NAACP filed a complaint saying that voting machines were incorrectly registering votes for Abrams as votes for Kemp.

For more on the voter suppression allegations in Georgia, read Vox’s explainer.

An inspector general reportedly finds that FBI employee altered a document in Russia investigation
Government shutdowns of “nonessential” retailers were a huge gift for Amazon, Walmart, and Target
California Gov. Jerry Brown casually unveils history’s most ambitious climate target
Why a Senate vote on stimulus has failed, again
A second whistleblower on Trump and Ukraine is coming forward
Did Brazilians vote against democracy on Sunday?

The vicious cycle of never-ending laundry