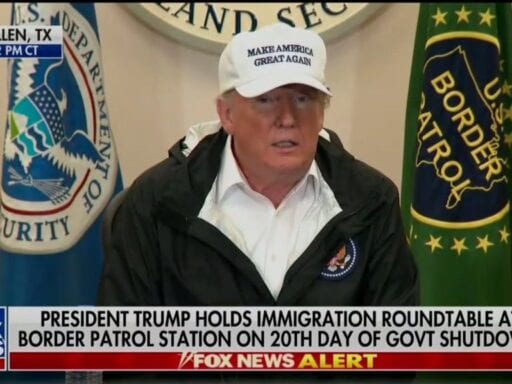 “They have tape over their mouths, electrical tape, usually blue tape, as they call it.”

President Donald Trump’s trip to the southern border on Thursday began with a roundtable event in which he promoted the baseless idea that undocumented immigrants are violent criminals and made a case for a border wall with bizarre (and false) comments like, “A wheel is older than a wall.”

But you wouldn’t have seen any of that had you tried to watch the event on Fox News. The staunchly pro-Trump cable network abruptly cut away from the proceedings early on, after Trump described human trafficking in grisly detail. Other cable networks declined to carry his remarks live.

Trump, alluding to undocumented immigrants, began by saying of human trafficking, “I hate to tell you that because of the internet, it’s worse than ever before.”

The president then attempted to make a case that a border wall would prevent human trafficking, saying:

They drive. They just go where there’s no security, where you don’t even know the difference between Mexico and the United States. There’s no line of demarcation. They just go out and where there’s no fencing, or walls or any kind, they just make a left into the United States and they come in and they have women tied up. They have tape over their mouths, electrical tape, usually blue tape, as they call it. It’s powerful stuff. Not good. And they have three, four, five of them in vans, or three of them in back seats of cars. And they just drive right in. They don’t go through your points of entry. They just go right through. And if we had a barrier of any kind — a powerful barrier, whether it’s steel or concrete — if we have a barrier, they wouldn’t be able to make that turn. They wouldn’t even bother trying.

A few seconds later, Fox News host Dana Perino broke in and Fox News cut away from live coverage of the event. The network ended up showing only about five minutes of a roundtable event that Perino hyped as “amazing programming” just before it started.

While Fox News has gone out of its way to protect Trump in the past, it’s unclear whether the network’s decision to cut away from the roundtable had anything to do with the content of Trump’s comments. A network spokesperson didn’t immediately respond to an email seeking comment.

But Trump’s disturbing, detailed, and factually dubious description of women being kidnapped — a description that’s become a staple of his case for the border wall — elicited an uncomfortable reaction from many people online.

Whether a border wall would even be as effective in preventing human trafficking as Trump wants you to believe is a matter of debate. In 2017, NBC reported that “experts and even Trump’s own Department of Homeland Security said they are unable to guarantee that the wall would have any impact the rate of trafficking,” since traffickers who currently take their victims across the border in desolate areas could find other ways to get people into the country.

Later during the roundtable, however, Trump once again demonstrated he’s not particularly concerned about facts. As part of an attempt to make a case that Republicans are more united in supporting his government shutdown than Democrats are in opposing a border wall, Trump claimed that “there was just a big article” in a publication he didn’t name in which “young Democrats just elected to office” say “the position of no barrier or no wall” is “indefensible.”

But as Daniel Dale of the Toronto Star pointed out, Trump’s comments completely misrepresented the article.

This might be the article Trump was talking about. It has two rookie Democrats expressing some concern about how the shutdown will play with voters. Neither, though, said the party wall stance is wrong, as Trump claims they did. Both oppose a wall. https://t.co/PlIvlQwSsE

Trump also misrepresented the risk presented by immigrant crime. During both the roundtable and a subsequent media event with Border Patrol agents, Trump pushed the notion that a border wall is needed to keep Americans safe from murderous immigrants. In fact, immigrants — both undocumented and documented — are less likely to commit crimes than native-born Americans.

Before the roundtable event was through, Homeland Security Secretary Kirstjen Nielsen fawned over Trump — “What a crisis mandates is a decisive leader with a vision. That’s what you have,” she said — and Trump falsely suggested that Bill Clinton was “going to build” a wall during his second term in office.

It was beyond parody. It was also a typical day for President Trump.

Is Trump guilty of obstructing Congress? I asked a legal expert.
Hurricane Florence: what we know about the powerful storm heading for the Carolinas
Trump’s new fixation on using a racist name for the coronavirus is dangerous
George Floyd was remembered by family, activists, and politicians at his funeral in Houston
Abolish the lame-duck period
What happens when we die?