George Floyd’s death set off uprisings across the country 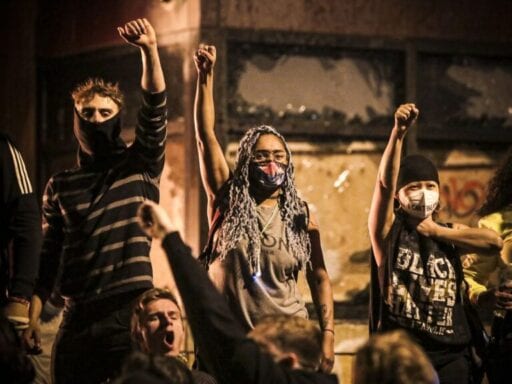 Share
Loading...
Protesters gather in front of the third precinct police building as it burns in Minneapolis, Minnesota, on May 28. | Scott Olson/Getty Images

Minneapolis sees a third night of unrest after the fatal arrest of the unarmed black man.

Protesters mourning the death of George Floyd, a black man fatally kneed in the neck by police, burned a precinct station in Minneapolis Thursday night during the third day of unrest.

The protests began after a video of Floyd’s fatal arrest surfaced on Monday showing a police officer pushing down on Floyd’s neck with his knee as Floyd yelled, “I can’t breathe.” The officer and three of his colleagues involved in the incident have been fired since Floyd’s death, but prosecutors are still deciding on whether to charge them — which is fueling protesters’ anger. The Minneapolis Police Department’s Third Precinct was targeted on Thursday night because the four officers had been based there.

Peaceful protests had started earlier in the day as people marched and shouted, “These killer cops have got to go” and “I can’t breathe,” according to the Star Tribune’s Andy Mannix.

Some protesters had set up an impromptu triage and first aid center next the Third Precinct, where they even stocked up on milk — which serves as a makeshift remedy — in preparation of the police’s tear gas, Mannix reported. Police in riot gear first began throwing tear gas at protesters on Tuesday to disperse the crowd.

Although some businesses had boarded up their windows and doors to avoid looting on Thursday, protesters made their way into big chain stores including a Target and T.J. Maxx. Wednesday night had also seen looted stores, vandalized buildings, and one man shot dead (when asked by the local CBS station about reports that he may have been killed by a pawn shop owner, police said was it “one of the theories”).

“This is bigger than all of us,” said Sophie Peterson, a 21-year-old nursing student who is one of the organizers of the first aid center. “This is a fight that’s going to take longer. … Businesses can come back, but murdered men can’t.”

The demonstrations took a volatile turn on Thursday night: Protesters threw fireworks at police in riot gear, and the officers fired back with projectiles, according to the New York Times. By 10 pm, the precinct building was evacuated as protesters broke in to smash equipment and lit fires. No serious injuries were reported.

Over the past few days of conflict, Minneapolis Mayor Jacob Frey, who had been supportive of the protesters and called for the arrest of the officer that killed Floyd, pleaded for peace.

“And in believing in our city, we must believe we can be better than we have been,” he said during a Thursday press conference. “We must confront our shortcomings with both humility and hope. We must restore the peace so we can do this hard work together.”

“As Governor, I will always defend the right to protest,” Walz said in a release. “It is how we express pain, process tragedy, and create change. That is why I am answering our local leaders’ request for Minnesota National Guard assistance to protect peaceful demonstrators, neighbors, and small businesses in Minnesota.”

By early Friday morning, St. Paul police reported dozens of fires and more than 170 damaged or looted buildings, but said there were no indications of serious injuries. The demonstrations prompted a tweet from President Donald Trump, who called the protesters “thugs” and suggested that they’d be shot for looting. As a result, Twitter marked his tweet as “glorifying violence.” Although company policy suggests a tweet like this could be taken down, the company has kept the post up for the “public’s interest.”

For many, the Minneapolis protests closely resemble demonstrations that rocked Ferguson after the death of unarmed black teenager Michael Brown in 2014. This time around, however, demonstrators are better prepared, activist Anika Bowie told the Daily Beast.

“Just since Ferguson, we’ve had this whole backlog of history of police brutality,” she said. “Now, we have more networks to exchange this information and communication.”

The protests in Minneapolis were prompted by the death of George Floyd — a 46-year-old black man that was fatally arrested on Monday — which was caught on video. The footage shows an officer pinning Floyd’s neck to ground as Floyd squirms and screams, “I can’t breathe.” Angry bystanders in the video complain about the officer’s excessive use of force until Floyd’s body goes limp and he becomes silent.

Derek Chauvin — the officer that had pinned Floyd down — was promptly fired, along with three of his colleagues that were involved in the incident. Chauvin had a history of complaints and has been involved in several police-shooting during his 19-year career, according to the Star Tribune. Tou Thao, another officer in the video that stood beside Chauvin, was sued in 2017 for excessive use of force, the paper reported. People are now calling for the arrest of these officers for killing Floyd, but prosecutors have yet to announce charges.

Floyd’s death, and the lack of arrests made, immediately set off protests across Minneapolis and black communities mourned the loss of another life to police violence. Thursday marks the third day of demonstrations, which have been growing more volatile each day.

“What happened in Minneapolis was the culmination of the anger of young ppl who are marginalized in the city. The unemployment rate for Blacks before the pandemic was 3 times that of Whites. Police have been brutalizing ppl here and killing folks for decades. Floyd was the match,” tweeted Mel Reeves, a longtime human rights activist from the city.

Floyd’s death has also prompted action in other cities: In New York City, at least 70 people were arrested Thursday night as marching protesters blocked traffic in Lower Manhattan and clashed with the police. In Denver, police in riot gear fired rubber bullets and tear gas at protesters that were vandalizing cars and buildings. And in Columbus, demonstrators broke down the windows of the Ohio Statehouse to enter the building.

Angry protests are being fueled by another injustice: the death in March of Breonna Taylor, a black woman in Kentucky who was shot in her own apartment by police officers for an investigation that she wasn’t involved in. Protesters gathered in Louisville, Kentucky, on Thursday demanding for accountability as they chanted, “No justice, no peace, prosecute police,” according to the New York Times. As tension escalated, a gun was fired from within the crowd — Louisville Mayor Greg Fischer said none of the officers had used their weapons — and seven people were injured.

Chants of “No justice no peace” ringing as protestors begin walking down Jefferson Street. pic.twitter.com/dYXXZcFR2S

“It’s not right that they keep killing black people,” protester Courtney Artis told the Courier-Journal. “My parents are from Birmingham, Alabama, and I’m tired of them repeating history. We’ve been peaceful too long, so that’s why we’re out here.”