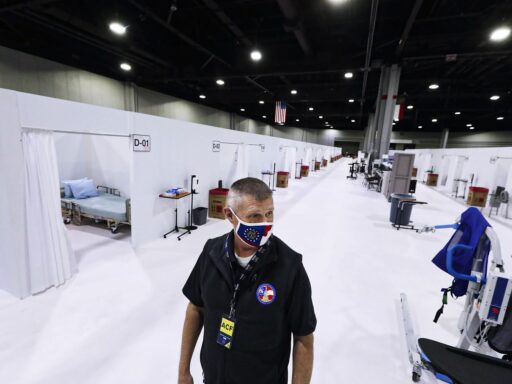 The state’s Covid-19 surge is a microcosm of a pandemic raging out of control.

President Donald Trump rallied to support two Republican Senate candidates in Dalton, Georgia, on Monday night. He appeared maskless in front of a large crowd, in a county buckling under a coronavirus surge, in a state struggling more than most with its outbreak.

In many ways, Georgia is a microcosm of a pandemic raging out of control.

Whitfield County, of which Dalton is the seat, ranks 16th out of 159 Georgia counties in its number of daily cases per 100,000 people, according to Covid Act Now’s database. The regional hospital that serves Whitfield County reported last week that its facilities had only one available ICU bed, according to the Atlanta Journal-Constitution.

The situation does not look much better at the state level: Georgia ranks 10th among the states in new cases per 100,000 people, ninth in positive test rate, and second in the number of filled ICU beds (now up to 92 percent).

“We’re clearly experiencing the worst surge in the pandemic we’ve seen in our state,” Harry Heiman, a clinical professor at Georgia State University, told me.

It could still get worse, too, once the consequences of the busy holiday season become apparent — it could take up to a few weeks for recent infections to lead to additional confirmed cases and new hospitalizations. To date, the state has had more than 650,000 confirmed Covid-19 cases and more than 10,000 deaths.

But the coronavirus didn’t stop Trump from holding a large rally, as Republicans strive to keep control of the Senate by winning at least one of the two Georgia Senate runoff elections on Tuesday. The president has routinely defied public health guidance since restarting his own campaign rallies last June. Monday’s event was expected to attract as many 2,000 people, even though the state has officially restricted any gatherings to 50 people or fewer.

While the event was held outdoors, the crowd was pressed together for hours, including in lines to enter the venue throughout Monday afternoon. Local health officials lamented to the Journal-Constitution that “people are getting together in groups outside their household and they’re being exposed in those situations.”

Currently, nearly 5,000 people are hospitalized in Georgia with Covid-19, according to the Covid Tracking Project, the highest number ever recorded. That’s up from less than 1,700 in mid-October, before the holiday rush. Because it can take a week or more for infected people to show symptoms, and then another week or two for their symptoms to become so serious they require hospitalization, it will be weeks before Georgia feels the full brunt of whatever spread occurred over the December holidays.

But even now, Heiman said, more than 40 Georgia hospitals are on what’s called “diversion,” meaning they are not accepting any patients for any reason into their emergency room or ICU units. Patients who are picked up by an ambulance could lose critical time if the nearest facility, which is where they are supposed to be taken, is full and emergency responders must find another place for them to go in the middle of a medical crisis.

“If that hospital is on diversion, it means they are not accepting emergency patients. It means you have to go somewhere else,” he said. “That’s a serious problem.”

How these problems might be addressed at the federal level will depend in part on who Georgia voters choose to represent them in the runoff elections, as which party controls the Senate will determine the prospects for any future aid legislation.

It did not have to be this way, Heiman contends. The dire situation in Georgia is the result of discrete policy choices that were made — or not made.

“It’s really from my perspective because of failed leadership at the state and federal level that we’re in the position we’re in,” he told me.

Trump’s failures in responding to Covid-19 are well documented, including in reporting like that of Vox’s German Lopez. Many state leaders and many individuals have also fallen short in doing what was necessary to stamp out the coronavirus, from refusing to institute lockdowns to passing the buck on vaccine distribution planning. And public health experts have had their shortcomings as well.

But Heiman singled out Georgia Gov. Brian Kemp for his unwillingness to adopt policies almost universally endorsed by scientists in helping to slow the coronavirus’s spread. The state has never issued a mask mandate, though numerous studies have shown they can be effective. Bars and restaurants have been reopened for months, with no new restrictions put in place when cases surged. Indoor dining is permitted.

Even the state restrictions that have been adopted — such as limiting gatherings to 50 people — are regularly defied, as they were at Trump’s rally on Monday.

“It’s not rocket science to figure out why we’re having these numbers,” Heiman said.

Complicating matters further is that, as in most of the country, responses to the Covid-19 pandemic are deeply polarized in Georgia. An October poll commissioned by the Journal-Constitution found that voters were evenly divided on Trump and Kemp’s response to the crisis, with about 90 percent of Republicans approving of the governor and president, while about the same percentage of Democrats disapproved.

That polarization goes deeper than approval ratings. Nearly 90 percent of Georgia Democrats said they worried they or someone in their family would contract the virus; less than 50 percent of Republicans said the same. About half of Republicans thought Covid-19 was mostly or completely under control; only 3 percent of Democrats agreed.

That polarization is likely here to stay, though President-elect Joe Biden’s campaign has said one of Biden’s top priorities in office is bringing more unity to the coronavirus response. Biden could also provide more resources to state and local governments experiencing new spikes and trying to roll out the new Covid-19 vaccines.

“My only hope is the new administration will bring their A-team, so states aren’t left to figure it out themselves,” Heiman said.

The future of the pandemic response will be determined, in part, by the Georgia Senate races. Democrats had originally endorsed $3 trillion in additional stimulus and response funding after the first Covid-19 relief bill passed in the spring; the price tag for that second package was brought down to $900 billion after negotiations with the Republican Senate.

President-elect Biden has already said the recently passed relief package was only a “down payment,” with more support being needed once he takes office. But his ability to deliver on that promise will hinge to a large degree on whether Democrats can retake the Senate by winning both Georgia runoffs — giving them the ability to more easily bring a new stimulus package to the Senate floor — or whether Mitch McConnell remains the majority leader.

Candidate for governor breastfeeds in family-focused ad
Sens. Warnock and Ossoff were just sworn in, officially giving Democrats the majority
The biggest stories headed into the 2020 Grammys
Why you can’t help screwing around while working from home
Senators urge Trump to use Defense Production Act to make more Covid-19 tests
Elizabeth Warren’s DNA test has started a whole new controversy