Get to know the films of Taika Waititi, the brilliantly funny director of Jojo Rabbit 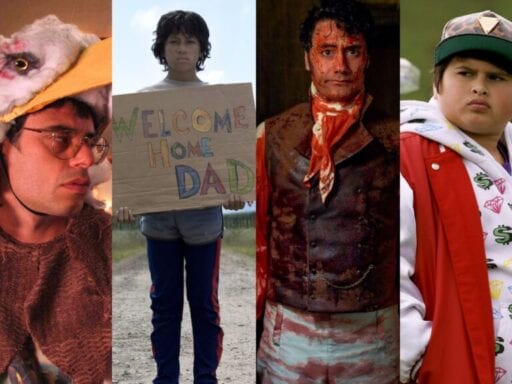 Share
Loading...
Eagle vs Shark, Boy, What We Do in the Shadows, and Hunt for the Wilderpeople. | Miramax / Unison Films / Paladin / The Orchard

From Boy to Thor: Ragnarok, his films are filled with offbeat humor and outsiders’ stories.

Jojo Rabbit, Taika Waititi’s dark comedy about a young boy living in Nazi Germany whose imaginary best friend is Hitler, is one of the year’s most-buzzed-about movies, largely because Waititi has amassed a devoted fan base. The 42-year-old director, who hails from Wellington, New Zealand, has built a career on stories of outsiders told with an offbeat sense of humor, and his goofy, affectionate sensibility promised a shot in the arm for the Thor franchise in 2017.

Jojo Rabbit left its debut at the Toronto Film Festival with mixed reviews but front-runner status in the impending awards season, nabbing the coveted Grolsch People’s Choice Award, which is often a predictor of future Oscar success. (Last year’s winner was eventual Best Picture winner Green Book.) So we’ll likely be hearing a lot from Waititi — who plays Hitler in Jojo Rabbit, a bold and subversive move for the Maori-Jewish director — in the months ahead.

But who is Taika Waititi? First known as an indie director, he cut his teeth on a number of short films while still a student, including one — titled “Two Cars, One Night” — that netted him an Oscar nomination. He’s also had a longstanding working relationship with Jemaine Clement, whom he met while they were studying drama and film at the Victoria University of Wellington, which has led to fruitful collaborations both in film and in the HBO series Flight of the Conchords, of which Waititi directed several episodes.

Waititi’s five feature films vary in scope and subject matter, but they share some uniting factors that have garnered him a devoted set of fans: an interest in underdogs and outsiders, and a self-referential comedic sense that never gets in the way of real feeling, and they run the gamut from tiny indies to the huge studio blockbuster Thor: Ragnarok.

All five of Waititi’s pre-Jojo Rabbit features are available to digitally rent — and they’re all worth a look, especially for new Waititi fans.

Waititi’s first feature was Eagle vs Shark, a quirky story of a pair of misfits in pursuit of love and revenge. Waititi co-wrote the film’s story with his then-girlfriend Loren (Horsley) Taylor, who starred as Lily, a fast-food cashier in love with the slightly less interested video game store employee Jarrod (Clement). They get together after a “dress as your favorite animal” party at Jarrod’s, and when he asks Lily to aid him in a plot to get back at a bully, she agrees.

The film premiered in the World Cinema section at Sundance and garnered mixed reviews, but the consensus even among many who didn’t love the movie was that this Waititi guy was one to watch. “The real knockout is the discovery of this comic gem,” Premiere’s Stephen Salto wrote, while at the New York Times A.O. Scott tired of the film but praised Waititi’s “dry, efficient direction.” Most of all, Eagle vs Shark established what would become the recurring themes of Waititi’s filmmaking: misfits and outsiders, rendered with a deadpan but loving style of humor.

Eagle vs Shark is available to stream on Netflix and to digitally rent on Amazon, YouTube, Google Play, iTunes, and Vudu.

Waititi’s second feature, Boy, premiered at Sundance in 2010 and ended up becoming the highest-grossing domestic film in its native New Zealand. Boy, set in 1984, is the story of an 11-year-old Maori child nicknamed Boy (James Rolleston), a massive Michael Jackson fan who is living with his grandmother, younger brother, and cousins on a farm when his estranged criminal father (played by Waititi himself) reemerges. Boy has long made up stories about his father, whom he idolizes, but as he gets to know the real man behind his myths, things begin to shift.

Roger Ebert gave the film 3.5 out of 4 stars, calling it “delightful” and praising Rolleston and Waititi’s performances. And in the Guardian, Cath Clarke wrote, “It’s a disarmingly lovely, big-hearted film, and hilarious in places.” Boy paints both its main characters with affectionate empathy: Neither feel totally at home in their lives, and they have to confront the line between fantasy and reality.

In 2005, Waititi and Clement had made a short film called “What We Do in the Shadows: Interviews with Some Vampires,” which they wrote, directed, and starred in along with their friend Jonny Brugh. The trio teamed up again for the feature-length version, which poses as a mockumentary about three male vampires named Viago, Deacon, and Vladislav who are roommates in Wellington. (A fourth ancient vampire lives in the basement.)

The film was a smash with critics, who found it both kooky and loving, focused on its characters and not just gags (though there are gags aplenty throughout). At RogerEbert.com, Simon Abrams called it “an irrepressibly charming B-movie that never over-stays its welcome, and is both conceptually clever and admirably well-executed,” while Salon’s Andrew O’Hehir wrote that the film was “a surprisingly delicate vampire spoof that’s both hilarious and respectful, and that captures all the silliest, scariest and saddest aspects of the bloodsucking tradition in one delicious package.”

In advance of the Thor: Ragnarok release, Waititi confirmed that a second installment titled We’re Wolves — presumably centered on the profanity-averse werewolf pack that proved a comedic highlight of the first film — is en route, but as of 2019, we’re still waiting. But there’s good news for What We Do in the Shadows fans: In March 2019, FX premiered a gleeful TV adaptation based on the same premise as the film and with a new cast that includes among others Booksmart’s Beanie Feldstein. And this time, the crew lives in Staten Island.

What We Do in the Shadows is available to digitally rent on Amazon, YouTube, Vudu, Google Play, and iTunes.

Waititi’s final pre-Thor feature is a total delight, a moving comedy about a teenage boy and a curmudgeonly old man who form a makeshift family. Julian Dennison stars as Ricky, whose foster mother — a no-nonsense woman with a big heart named Bella (Rima Te Wiata) — dies suddenly, leaving him in the care of her husband, a gruff farmer named Hec (Sam Neill). Ricky and Hec accidentally find themselves on the run from the law, an unlikely pairing of misfits, and though they drive each other crazy, they come to realize they might be together for a reason.

Hunt for the Wilderpeople once again draws on Waititi’s talent for unexpected comedy against a backdrop of affectionate characterization, and it was a hit with critics, some of whom saw it as a welcome harbinger of what audiences could expect with Thor: Ragnarok. “Every once in a while, a small, unheralded film comes along, so smart and funny, such a pleasure to experience, you can’t believe your luck,” Kenneth Turan wrote in the Los Angeles Times. “Hunt for the Wilderpeople is such a film.”

Hunt for the Wilderpeople is available to stream on Hulu and digitally rent on Amazon, YouTube, Vudu, Google Play, and iTunes.

The third movie in the Thor franchise turned out to also be its goofiest, and probably, for that reason, its best. Waititi’s oddball sensibility turned out to be a perfect fit for the fantastical world of Asgard, and in telling the story that culminates in a battle between Thor (Chris Hemsworth) and Hela (Cate Blanchett), the goddess of death, it never sacrifices humor for action.

Self-aware but still thrilling, Thor: Ragnarok showed that Waititi, given the freedom to reinvent the franchise to fit his sensibility, could turn out a solid addition to the wider MCU while also keeping his distinct fingerprints on it. It’s one of the best-reviewed Marvel films of all time on Rotten Tomatoes, tied with Iron Man and surpassed only by Avengers: Endgame and Black Panther.

Thor: Ragnarok is streaming on Netflix and available to digitally rent or purchase on YouTube, Google Play, Amazon Prime, Vudu, or iTunes.

Live results for the special election to fill Rep. Elijah Cummings’s seat
The coronavirus pandemic hasn’t stopped the war in Afghanistan
How Fox News lets the Trump family off the hook for profiting off the presidency
Collins was supposed to be different
North Carolina Republicans’ audacious power play, explained
Trump keeps highlighting “angel moms” to make the case for his immigration agenda