Glenn Weiss’s Emmys proposal to his girlfriend: your questions, answered 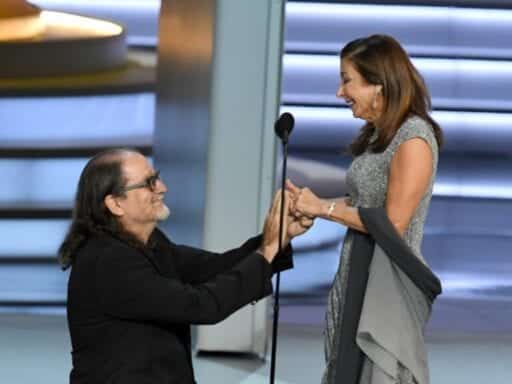 Here’s the sweetest moment of the Emmys ceremony.

Late in the Emmys telecast, during the portion of the show that often tends to drag, a hero stepped forward to make us all sit up and take notice for a moment. While accepting his Emmy for Outstanding Directing for a Variety Special, Glenn Weiss took the moment to address his girlfriend, Jan Svendsen.

He began by talking about his mother, who died just two weeks before the ceremony. But she would want him to focus on the sunshine in his life, Weiss said, and so he turned to his own “sunshine,” Svendsen.

Svendsen gasped, bursting into tears and nodding frantically, and the crowd exploded into applause. And at home, viewers were united as one in thinking: How nice! Also, who are these people? Also, public proposals sure are tricky, aren’t they?

Never fear. We are here to answer your questions.

Who are these people?

Glenn Weiss won this year’s Directing for a Variety Special trophy for directing the 2018 Oscars telecast. It was actually his 11th Emmy — he’s won the category (or its earlier iteration, Directing for a Variety Series) almost every year since 2003, usually for directing either the Oscars or the Tonys. That means he’d already had 10 tries to get his acceptance speech right, which might explain why he was willing to spend a whole speech on a proposal.

The Jan Svendsen to whom he just got engaged is not former Olympic athlete Jan Svendsen, although shoutout to that lady and her shot-put skills. Weiss’s now-fiancée Svendsen works in marketing on Broadway, and given Weiss’s frequent direction of the Tonys telecast, it makes sense that they might form a connection.

Public proposals sure are tricky, aren’t they?

Public proposals can be heartwarming, but there’s also always the weird sense that maybe the person being proposed to feels compelled to say yes because they don’t want to make a big scene in front of an audience. (There are a lot of compilations out there of public proposals gone horribly wrong.) In this case, people seem mostly okay with Weiss’s proposal — Svendsen seemed more surprised to be getting proposed to at the Emmys than getting proposed to at all — but in general, it’s a tricky move to pull off without feeling coercive.

Weiss did nicely flip one script, though: At the Rio Olympics two years ago, there was a weird mini trend of men proposing to their girlfriends while they accepted their Olympic medals, in a move that was either incredibly romantic or creepily taking control of the woman in question during her moment of professional triumph, depending on whom you ask. But Weiss made his proposal during his moment of professional triumph, sharing the spotlight instead of stealing it, and that’s a change we’re all here for.

And not everyone is put off by a public proposal. For some, Weiss’s move was nothing less than an astonishing display of true love.

Man that was the best speech ever! #emmys2018 pic.twitter.com/KlXF6tJB66

“The man that’s gonna be with me, he’s gonna propose to me on the Emmys,” declared Saturday Night Live’s Leslie Jones on Twitter. “If you don’t do that, then you ain’t serious about our love.”

6 takeaways from acting Attorney General Matthew Whitaker’s hearing
Biden could do a lot to fight factory farming even without Congress
A stunt from Rand Paul highlights limited Republican support for impeachment
The world’s scariest facial recognition software, explained
Russia is a threat to American democracy, with or without collusion
Elizabeth Warren wants to level the playing field for entrepreneurs of color