GM workers are on strike to accomplish what Trump couldn’t 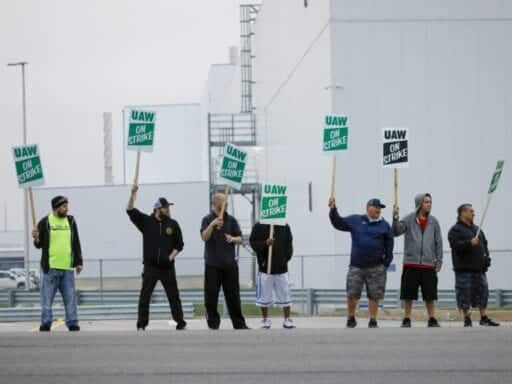 Share
Loading...
United Auto Workers members picket at a gate at the General Motors Flint Assembly Plant after the union declared a national strike against GM at midnight on September 16, 2019, in Flint, Michigan. | Bill Pugliano/Getty Images

They want the automaker to keep good-paying jobs in the US.

At a July 2017 rally in Youngstown, Ohio, President Donald Trump told his supporters not to sell their homes because the factory jobs are ‘‘coming back. They’re all coming back.’’

A few miles away, a General Motors factory has since closed, no longer producing the Chevy Cruze. Two other GM factories in Michigan and Maryland have also stopped production.

Needless to say, manufacturing jobs have not come roaring back since Trump took office. The president’s tariff war has made imports more expensive for US manufacturers, and now the industry is shrinking. Last year, GM said it would slash 14,000 jobs in North America, and would move forward with plans to build the Chevy Blazer in Mexico.

Nearly 50,000 GM auto workers are now on strike for the second day in a row, trying to accomplish what the president could not. From Georgia to Michigan, outside more than 50 US factories, they are picketing around the clock, venting their anger over the company’s recent decisions. They are demanding — among other things — that GM keep jobs in the US and reopen its idled factories.

GM employees with the United Auto Workers union had been negotiating another four-year contract when talks broke down this weekend, right as the previous contract expired. The deal they are hashing out will serve as a template for the union’s new contracts with Ford and Chrysler, too. That’s why the strike is so significant: What GM workers get at the end of their strike will determine what hundreds of thousands of auto workers have to live with.

But national politics have complicated the talks. Trump keeps trying to get involved, and it’s not helping. So employees are doing this on their own.

GM workers want what they lost

General Motors caused an uproar in November when it announced plans to close up to five factories in the US and Canada and cut more than 14,000 jobs over the next two years.

The automaker said that consumers weren’t buying enough cars like the Chevy Cruze and that the overhaul would save the company $6 billion. GM also blamed President Donald Trump, whose tariffs on imported steel have cost the company $1 billion.

GM’s decision to cut jobs and close factories sparked a backlash from lawmakers in Canada and the United States. Sen. Sherrod Brown (D-OH) called it “corporate greed at its worst,” pointing out that GM received millions in corporate tax cuts but failed to use the money to invest in its workers. Instead, the company recently announced plans to build its new Chevy Blazer in Mexico, a decision that frustrated US labor unions that want those jobs to go to American workers.

Trump was also reportedly furious about the decision. GM produces electric cars, and buyers in the US can get a federal tax break for purchasing one. So Trump threatened to cut those subsidies for GM vehicles if the company cut American jobs — a move he can’t do without Congress.

Very disappointed with General Motors and their CEO, Mary Barra, for closing plants in Ohio, Michigan and Maryland. Nothing being closed in Mexico & China. The U.S. saved General Motors, and this is the THANKS we get! We are now looking at cutting all @GM subsidies, including….

But Trump’s bullying tactics didn’t work. They also didn’t work when Harley-Davidson announced job cuts and a new factory in Thailand. Companies said Trump’s tariffs on imported steel are costing them billions of dollars. So it’s no wonder why the manufacturing industry is shrinking two years into Trump’s presidency.

The Institute for Supply Management’s index of manufacturing purchases fell to 49.1 in August, a seven-year low. Figures below 50 suggest that the manufacturing economy is shrinking. But that trend hasn’t stopped GM employees from demanding what they once had.

When GM and Detroit’s other big automakers went bankrupt during the Great Recession, employees gave up a lot to keep the companies afloat.

The union and its members agreed to let new hires earn less than half of the base salaries and allowed GM to hire temporary workers for even less pay and fewer benefits. But four years and an economic rebound later, employees are no longer okay with that.

The automaker has been earning decent profits: GM made $35 billion in North America over the last three years, all while closing plants in the United States. While temporary workers were earning as little as $15 an hour, GM CEO Mary Barra made nearly $22 million dollars last year. That’s 281 times the median GM worker.

Representatives for GM and UAW have been meeting for contract negotiations since July in order to hammer out details on wages, health care, benefits, profit sharing, and job security for both permanent and temporary workers. The union was also pushing for GM to reconsider the proposed closures of four facilities.

As Vox’s Anya van Wagtendonk explains, GM workers’ contracts expired at midnight on Saturday with no agreement reached. At a press conference in Detroit on Sunday morning, Terry Dittes, a UAW vice president who leads the union’s GM efforts, said a strike was “our last resort.”

GM disagrees. Late on Sunday morning, the company released a statement of its own, saying it had offered the union more than $7 billion in investments across four states, including the creation of 5,400 jobs and increased base wages and benefits. The company also offered to halt the planned closure of an assembly plant and to build a new one in Ohio.

“The UAW says, ‘Look back at all the money you made, now it’s time to give us a fair share. We gave up all of this in the past, you owe us this,’” Wheaton said.

Meanwhile, the company is looking forward. “The economy may be going into a recession,” Weaton said, “so they really don’t want to promise all of that stuff.”

On top of that, Trump has “escalated” the negotiations, he added.

The president needs the support of Ohio and Michigan workers who voted for him, so he has a big interest in seeing GM reopen its plants there.

On Monday, Trump told reporters outside the White House that “federal mediation is always possible” between GM and the UAW. “Hopefully, they’ll be able to work out the GM strike quickly,” he added. “We don’t want General Motors building plants outside of this country … We’re very strong on that.”

For now, GM workers and executives are not taking him up on his mediation offer. Instead, employees are hoping the $50 million their strike is costing the company each day will accomplish what the president has not.

In defense of Sarah Jeong
Vox Sentences: Russia and the second Great Schism
Facebook is launching a news section — and will pay some publishers millions
Yes, Russia is interfering in the 2020 election
The post office arrested Steve Bannon. Yes, the post office can arrest people.
Why millions of Americans are getting coronavirus stimulus payments on scammy-looking debit cards