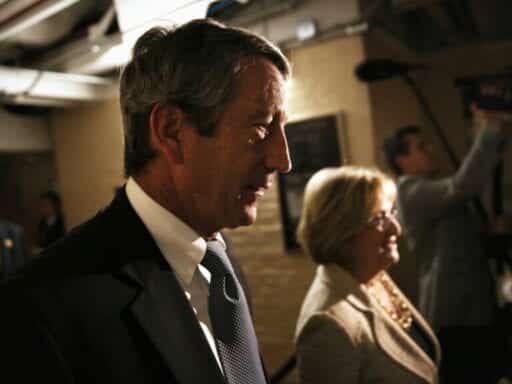 Share
Loading...
Mark Sanford on Capitol Hill during his time in the US House of Representatives. | Alex Wong/Getty Images

Sanford said the Republican primary needs “an earnest and real conversation on debt and deficits and government spending.”

Mark Sanford, former governor of South Carolina and a former US representative for that state, announced Sunday that he plans to run against President Donald Trump in the 2020 Republican primary with the national debt at the center of his platform.

“I am going to get in,” Sanford told host Chris Wallace on Fox News Sunday. “I think we need to have a conversation about what it means to be a Republican. I think as a Republican party we have lost our way.”

Mark Sanford explains why he is running against President Trump in the Republican primary. Only on Fox News Sunday. Check your local listings. #FoxNews #FNS pic.twitter.com/KYKo12QDZK

Sanford — who has long been a critic of the president — announced in July he was considering a run, visited early voting states such as Iowa and New Hampshire, and told Vox’s Tara Golshan he would launch a campaign if he could find enough support.

While other Republicans in the primary race, like former Rep. Joe Walsh, have said Trump‘s behavior drove them to join the contest, Sanford said he wants to run because no presidential candidates are talking about what he finds most alarming: The $22 trillion national debt.

The candidate told Fox News he has a problem with how Trump has “called himself the king of debt,” and that he feels the president “has a familiarity and comfort level with debt that I think is ultimately leading us in the wrong direction.”

In response to Wallace pointing out that he stands little chance of beating Trump in the primary, Sanford said, “You never know,” but indicated his first goal is to bring the deficit back into the national conversation.

“Once every four years we have a chance to have a national debate on where we’re going next as Republicans and Democrats and as Americans,” Sanford said. “The thing that has been lacking in this debate has been an earnest and real conversation on debt and deficits and government spending.”

Sanford and Trump have a bitter history

Sanford arguably lost his seat in Congress thanks to Donald Trump.

The former governor briefly supported Trump in 2016, but began openly criticizing the president shortly after he took office. While he served in the House, Sanford was a fairly moderate member of the Freedom Caucus, a conservative and libertarian collection of lawmakers. He voted against Trump’s policy positions more than only four of 244 Republican House members, though he still voted with the president more than 70 percent of the time.

When reelection time came around in 2018, Sanford faced a far-right primary challenger in former US Rep. Katie Arrington. Trump weighed in with a tweet just three hours before polls closed, throwing his support behind Arrington and writing “Mark Sanford has been very unhelpful to me in my campaign to MAGA.”

Arrington won by four percentage points, but was later was defeated by Rep. Joe Cunningham (D-SC).

Now, Sanford will have a chance to face off against the president in a direct contest. Trump remains popular with his base, and there is little indication there are enough Republicans who prioritize federal spending for Sanford to build his own base of support.

And there are other challengers to Trump for the president’s Republican critics to consider backing. Former Rep. Joe Walsh has cast himself as a figure who would enact a Trump-like agenda while behaving more like a traditional politician. And former Massachusetts Gov. Bill Weld claims he is a “normal Republican” who will tackle big issues like climate change and — like Sanford — address the national debt.

Defeating Walsh and Weld, both who began their campaigns before he did, won’t be easy for Sanford — and beating Trump will be all but impossible. However, he told Golshan he feels he has to try: “What is needed is more of a country doctor. This medicine is not going to taste particularly great. But if we don’t do it, the illness that will befall you will be much, much worse.”

The “boogaloo” “movement,” explained
The Super Bowl commercials were really bad this year, huh?
The new Kavanaugh allegation is important because of what it says about the FBI
What Amy Coney Barrett’s confirmation will mean for Joe Biden’s climate plan
MacKenzie Scott, the Amazon billionaire, is giving away $1 billion a month to charity
Prominent evangelical leader on Khashoggi crisis: let’s not risk “$100 billion worth of arms sales”