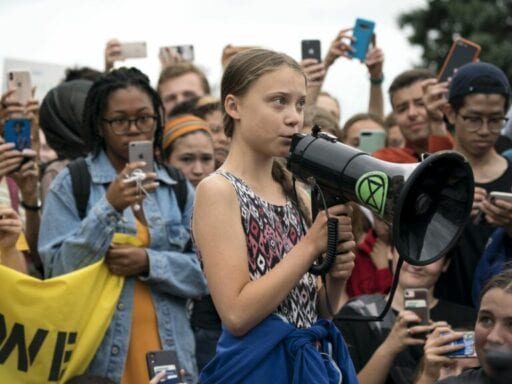 The international protest will come ahead of the UN Climate Action Summit.

Young people from around the world are leading a massive coordinated strike from school on Friday, September 20, to protest government and business inaction on climate change. It is likely to be one of the largest environmental protests in history.

The Global Climate Strike comes just before countries will gather at the United Nations for the Climate Action Summit on September 23. It’s a meeting ahead of the UN General Assembly where countries are supposed to ramp up their ambitions to curb greenhouse gases under the 2015 Paris climate agreement.

“If you can’t be in the strike, then, of course, you don’t have to,” 16-year-old Swedish climate activist Greta Thunberg, the original school striker who began last year demanding more action from her government on climate change with weekly protests, told Teen Vogue. “But I think if there is one day you should join, this is the day.”

Thunberg has become an increasingly influential figurehead and voice for youth climate angst and activism. Since she no longer flies because of the aviation industry’s high carbon emissions, she was offered the opportunity to travel to the US on a zero-emissions sailboat. After arriving on August 28, she’s now in Washington, DC, speaking before Congress and meeting with US lawmakers and activists before heading to New York City for the strike and the summit.

It’s a big moment for Thunberg and the legions of youth and adult activists and leaders she’s inspired since she began skipping school on Fridays to protest outside the Swedish Parliament in August 2018. Thousands of young people in the movement, called Fridays for Future, now strike every Friday to demand more aggressive action from their governments and the international community. The last large-scale coordinated climate strike on May 24 drew participants from 130 countries.

The New York strike is expected to attract thousands of people, and parallel strikes in DC, Boston, Seattle, Minneapolis, Miami, Los Angeles, and Denver may, too. But this is truly a global strike and it will be the movement’s largest yet, with 2,500 events scheduled across 150 countries. (The Global Climate Strike website has a searchable map showing all the events.) Millions in all may participate.

Thunberg will be leading a demonstration at Foley Square starting at noon Friday in New York City, followed by a rally and march Battery Park. Public schools in New York City have even excused students to join the strike.

We applaud our students when they raise their voices in a safe and respectful manner on issues that matter to them. Young people around the world are joining the #ClimateStrike this week—showing that student action will lead us forward.

And it’s not just young people joining in. In Sweden, a group of senior citizens called Gretas Gamilingar (Greta’s oldies) is participating. Indigenous activists, labor groups, faith leaders, humanitarian groups, and environmental organizations like Greenpeace and 350.org will be there, too. Outdoor equipment company Patagonia said it will close its stores on Friday in solidarity with the strike. So is snowboard brand Burton. More than 1,000 employees at Amazon have pledged to join the strike.

With the UN Summit on Monday, this strike is aimed at getting countries to commit to tougher climate targets and faster transitions to renewable energy. Under the Paris agreement, countries agreed to work toward limiting global warming this century to less than 2 degrees Celsius above pre-industrial levels, but they set their own targets. At the time, the targets were not in line with the goal, but the expectation was that countries would gradually ramp up their ambitions in curbing greenhouse gas emissions over time. The upcoming UN summit is where countries are expected to present their new, more aggressive targets.

“I look forward to welcoming young leaders like Greta Thunberg, and many others,” said UN Secretary General António Guterres in a press conference last month. “I am telling leaders, don’t come to the summit with beautiful speeches. Come with concrete plans, clear steps to enhance nationally determined contributions by 2020, and strategies for carbon neutrality by 2050.”

However, greenhouse gas emissions are rising around the world, and the largest historical emitter of carbon dioxide, the US, is trying to leave the Paris accord.

Young people are inheriting a world racing toward climate catastrophe. They aren’t happy about it.

One of the most powerful themes of the strike movement is that the youngest people have the largest stakes in a world reshaped by climate change. And they are justified in feeling aggrieved by the lackadaisical approach governments and institutions have taken to the problem.

Lately, more and more young activists have been radically reshaping the conversation around climate change.

In the US, youth campaigners at the Sunrise Movement have forced a national discussion about climate change and comprehensive frameworks to address it like the Green New Deal. Almost every leading Democratic contender for the White House has now issued their own plan to combat climate change.

Television networks including CNN and MSNBC have responded by devoting an unprecedented amount of airtime to discuss the policy implications of climate change with presidential contenders.

And in the courts, a major climate change lawsuit is underway with more than a dozen young plaintiffs who are suing the US government for profiting off of industries that emit greenhouse gases. In so doing, the government has deprived young people of their right to a safe climate. The suit, Juliana v. US, has already drawn the attention of the US Supreme Court. Thunberg is planning to join the Juliana plaintiffs and Democratic lawmakers for an address on the steps of the Supreme Court this week.

The school strikers and the Juliana plaintiffs have also reframed the discussion around climate change. It’s just as much an issue of justice as it is an issue of protecting the climate.

The people who contributed least to the problem stand to suffer the most, like people in small island countries with very low carbon emissions who are now threatened by sea level rise and extreme weather. And the worst consequences of unchecked warming will fall to future generations. Strikers are demanding that the policy response to climate change center on the issue of justice.

“We need to act right now to stop burning fossil fuels and ensure a rapid energy revolution with equity, reparations and climate justice at its heart,” according to the demands on the climate strike website.

The strikes, then, serve as a show of force from some of the people who have the most to lose from climate change. Whether countries will take that as motivation to do more to limit warming remains to be seen.

The Aurora shooter had a history of domestic violence and assault. He never should have had a gun.
The geoengineering question
American Horror Story: 1984 puts the camp back into teen slashers
RSVP now to talk Gideon the Ninth with Tamsyn Muir and the Vox Book Club
The 30-something life crisis
“Do something”: why Bill de Blasio is facing criticism for the Eric Garner case