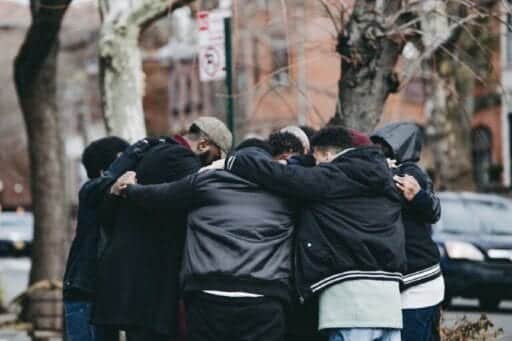 HBO’s Random Acts of Flyness has been billed by some as a “late-night comedy series,” but I’m not certain “comedy” is the right designation for it. I understand the compulsion; the half-hour program from creator Terence Nance is composed of sketches that are so visually distinct and (occasionally) rapid-fire that comedy sketch series like Portlandia and Key & Peele come to mind. But the official synopsis offered by HBO — “a unique mix of vérité documentary, musical performances, surrealist melodrama and humorous animation” which aims to showcase “the beauty and ugliness of contemporary American life” — hints as to why it isn’t so easy to pigeonhole.

It’s not that Random Acts of Flyness isn’t funny, or that humor and commentary are mutually exclusive. Rather, I don’t think provoking laughter is the show’s primary intention or its primary mode of conveying its message.

Consider the second episode, “Two Piece and a Biscuit,” and the sketch that opens it. (Each episode is generally made up of one or two longer sketches that are punctuated by smaller bits.) In the evening, a young woman named Najja (Dominique Fishback, whom you may recognize as one of the best parts of The Deuce) leaves her apartment. As she walks, she begins introducing the show; as she speaks, a man enters the frame, immediately beginning to follow and catcall her.

Suddenly he falls, as if struck by lightning. The camera moves, revealing a brick wall in front of him. It’s a literal “knock it off.”

Random Acts of Flyness is chock-full of such moments of inspiration, as Nance and his co-writers regularly reimagine intangible concepts or truths that people are tempted to ignore (“white thoughts,” for instance) as solid objects, including brick walls. And that’s as it should be. Random Acts of Flyness isn’t just about living in contemporary America; it’s about being black in contemporary America. That experience (or any experience) can’t be captured in a single sketch, let alone a single genre.

“Two Piece and a Biscuit” is built around a series of monologues. These monologues are given by real people, not sketch characters, and the speakers include a cis woman, a trans woman, and a gender-nonconforming person. Each speaker details their experiences with their body while sitting alone in a mirrored black box. While they’re not comic bits, everyone appears to be in good humor.

The cis woman, who is black, talks about having wanted plastic surgery since she was young, not necessarily because she thought she was ugly or because she was unhappy, but because she saw the disparity between her features and white features as something to be fixed. The trans woman talks about becoming comfortable in her own body, and not feeling like she needs to get work done in order to be a woman. The gender-nonconforming person talks about how performative gender identity can be.

They’re the kinds of conversations that are only just beginning to be had on mainstream TV (even though Random Acts of Flyness airs at midnight, it’s still on the ever-prestigious HBO, and the pilot is available to stream for free on YouTube) — and it feels significant to be hearing these stories told by those who are actually living through them.

The rest of “Two Piece and a Biscuit” exists in the realm of bizarre fiction. The sketches are similarly bold, and honest in a way that verges on confrontational — even if they don’t always feel like complementary pieces of a whole.

Leaving her catcaller behind in the episode’s opening sketch, Najja heads to an arcade. The first game she plays is a shooter, and the swarms she’s defending herself from aren’t the typical zombies but people on the street: black men (“You’re too dark for me anyway, sweetheart”), white men (“MAGA!”), black women (“You’re sleeping with the enemy”), white women (“Oh, my god, I want your butt”). The stream is endless.

Later, after Najja gets beaten at a Dance Dance Revolution-style game by a trans woman, the woman gives Najja another brick wall to use as a consolation prize. She’ll need it, Najja is told, as the wall floats out of the machine. All women have to stick together.

Though the idea and execution is solid, the payoff feels like it’s only addressing the episode’s themes of street harassment and ownership of one’s body by half. Two other sketches in the episode — involving a smartphone video of a woman telling off a public masturbator, and a man delivering an argument for other men to quit harassing women on the street — fall similarly short. The sketches are bold, but not always built out enough to carry the weight of what they’re trying to address, and the connective tissue feels thin. The scene at the arcade with Najja and the trans woman is the only time the episode really ties the monologues and the sketches together.

Thinking optimistically, it’s the kind of problem that’ll resolve itself as the season carries on, but in the two episodes that have aired so far, it’s a stumbling block.

At its best, Random Acts of Flyness allows its disparate parts to cohere into deeper meaning

The episode’s other big sketch manages a slightly more satisfying conclusion. It’s a retelling of Peter Pan, opening with a young man chasing his shadow through an apartment complex. Hook appears when Pan fondly roughhouses with another boy, accusing him of “faggotry” while the men in the room try to convince Hook that it’s not true, that such a thing would never happen in their community. Pan escapes with Wendy’s help, fleeing to “Nuncaland,” this world’s version of Neverland, where he tries to convince her to stay.

The segment is magical, not least in part because it turns into an all-out musical sequence. When Wendy sings, the Pan corollary becomes clear: The boys need to grow up. Though they risk becoming Hooks themselves and embodying what is stereotyped as black masculinity, or inheriting their father’s sins, they can’t stay boys forever. And instead of Wendy having to hide from rape culture and harassment in Nuncaland, she argues, “You should be the ones to grow.”

In the final musical number of the sketch, though there are a few loose ends — the stigmatization of homosexuality isn’t really addressed again, for example — it manages to fold in most of the themes that the episode has touched on so far, as well as giving the preexisting story of Peter Pan a deeper dimension.

It hints at the greater heights that Random Acts of Flyness could — and hopefully will — reach, as the artists involved use what seems to be complete artistic freedom to speak, and to sing.

What 2 fictional Gileads can teach us about America in 2018
Now that Netflix has more streaming competitors, it suddenly cares about ratings
Exclusive: Biden leads Trump by 12 points in a national UT Dallas poll
A Christmas Carol, explained by a 5-year-old
How college activists are trying to win the youth vote remotely
When will kids be able to get the Covid-19 vaccines?