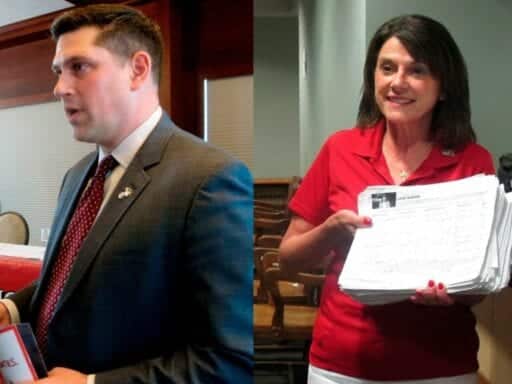 With the 2018 Wisconsin Senate election slipping away, Republicans could be losing what they once hoped was a prime opportunity to win a Senate seat in a state that Donald Trump carried in 2016.

A vicious GOP primary, pitting a former Democrat running as an outsider against the conservative state establishment, isn’t improving their odds of beating Democratic Sen. Tammy Baldwin in her first reelection campaign. Voters will head to the polls on Tuesday to determine who her opponent will be.

The latest polling has shown the race between Kevin Nicholson, the ex-Democrat, and Leah Vukmir, a state senator, to be very close: Results range from Nicholson +10 to Vukmir +2. They’ve been climbing over each other to swing to the right and to embrace Trump, a questionable general election strategy in a state where the president is deeply unpopular.

But regardless of Tuesday’s outcome, Baldwin seems to be in an increasingly solid position to win reelection for a seat that Democrats must hold if they are to having any chance of winning the Senate back from Republicans in the 2018 midterm elections. Surveys have consistently shown her leading both Nicholson and Vukmir by as much as 10 points or more. Election forecasters have moved the race into the Likely Democratic camp.

If Republicans are to have any chance, they’ll have to rally around their candidate after the primary election and hope the national political environment improves. But the campaign between Nicholson and Vukmir, and Trump’s poor approval ratings, are roadblocks standing in their way.

The Republican campaign has been defined by Nicholson’s history as a Democrat, Vukmir’s lackluster record as a legislator, and, of course, Donald Trump.

Nicholson was a Democrat until the early 2000s — either 2000 or 2002, depending on which story you believe — and his parents actually gave the highest allowable donation to Baldwin in February, maxing campaign contributions to their son’s potential general election opponent.

The candidate then accused his own parents of political intolerance, as the Washington Post reported, in a bizarre escalation of the family’s feud. Vukmir’s campaign, meanwhile, boasts that she is a “lifelong Republican.”

But on the other side, outside conservative groups like Club for Growth have criticized Vukmir as a RINO (Republican in name only). The state senator, in the legislature since 2002, has the support of the state GOP and has allied herself with Wisconsin Gov. Scott Walker. Nicholson has used that to paint his opponent as a creature of the political establishment and an “insider” against his outsider.

Nicholson has also attacked Vukmir for being insufficiently supportive of the president, even though her campaign spots name-check building Trump’s border wall and draining the Washington swamp. His campaign is running TV ads of Vukmir saying she wasn’t endorsing Donald Trump. As the folks at PolitiFact documented, she originally supported Walker and then Sen. Marco Rubio (R-FL) before coming around to Trump.

“This race has devolved into grotesque pandering of who’s the biggest Trump fan,” Scot Ross, who leads the progressive group One Wisconsin Now, told me.

The other backdrop is a battle of the Republican billionaires. Illinois shipping magnate Richard Uihlein’s groups have spent a lot of money supporting Nicholson, while Wisconsin homegrown megadonor Diane Hendricks has thrown millions behind Vukmir. That healthy supply of funding has also helped keep the race competitive.

The polling doesn’t paint a very clear picture, so Tuesday’s primary should be close. Marquette University, the gold-standard pollster in the state, found Vukmir with a 2-point lead in mid-July. But soon after, NBC News/Marist found Nicholson leading by 10.

After the heated primary, Republicans have just a few months to rally around their candidate before the November general election.

“The GOP knows it has a unity problem,” Ross said. “That acrimony is going to have some impact on their enthusiasm.”

As evidenced in the Republican primary, GOP donor dollars have been pouring in against Baldwin. By early August, outside conservative groups had already spent $16 million in Wisconsin, according to a summary provided to Vox. For context, during the entirety of Baldwin’s 2012 Senate race — during a presidential election year, when spending is always higher — anti-Baldwin forces spent about $20 million.

The money is coming in from the usual suspects, in addition to Hendricks and Uihlein: groups aligned with the Koch brothers and the National Republican Senate Committee, which will surely become more involved once there is an official Republican nominee.

“There is more excitement to go on offense than be on defense in some corners,” one Wisconsin Republican operative, who asked for anonymity to speak candidly, told me of the party’s mood heading into the campaign.

They’ve targeted Baldwin on some of the expected ground, like opposing the Republican tax plan, but there is one Wisconsin-specific issue that GOP operatives want to make a big deal of through November.

An outside group, Concerned Veterans of America, has tried to tar Baldwin with the Tomah Veterans Affairs hospital scandal. Baldwin was criticized after an inspector general report surfaced indicating that she had sat on a report about the possible overprescription of painkillers at the hospital where a veteran overdosed and died.

“If she loses, that’s probably the main reason why she loses,” the GOP operative said.

Left unsaid in those attacks, Baldwin’s campaign would note, is that she helped to get a law passed in 2016 — one she worked on with the family of the veteran — aimed at reforming opioid prescribing practices at the VA.

The good and the bad for Tammy Baldwin

Wisconsin is a big battleground, in many ways, in the 2018 midterms. Walker is seeking a third term after he dramatically cut the state’s welfare spending and put new restrictions on its Medicaid program. Paul Ryan, also from Wisconsin, is retiring, which creates the possibility that a Democrat could replace the outgoing Republican speaker of the House.

Baldwin will be aided by some tailwinds. It’s always hard to beat incumbent senators, particularly in off years when their party is out of the White House — they win nine out of 10 times in those situations. Trump is not particularly popular in the state either; the July poll from Marquette University found that just 42 percent of Wisconsin voters approved of his job performance and 50 percent disapproved.

On the enthusiasm scale, another recent survey found that Democrats (64 percent) were more excited to vote than Republicans (54 percent) this fall. Democrats notably won a very red Wisconsin Senate district in January that Trump had carried with ease.

The fundamentals of the race are strongly in Baldwin’s favor. And that, combined with her strong polling, prompted forecasters like the University of Virginia’s Crystal Ball to slide the Wisconsin race into the Likely Democratic category.

But Baldwin isn’t Ohio’s Sherrod Brown, who is also an unrepentant progressive senator running for reelection in a rapidly reddening state, and who has a strong in-state brand. This is Baldwin’s first reelection — the first time she’ll go back before the voters when President Barack Obama isn’t on the ballot. (She trailed Obama’s vote share by a little more than a percentage point in 2012.)

Wisconsin’s voters seem ambivalent about Baldwin after six years. The Marquette poll in July found that 41 percent of voters had a favorable impression of her, and 40 percent had an unfavorable view. One in five Wisconsin voters said they haven’t heard enough or simply didn’t have an impression about Baldwin.

In a very real sense, the Wisconsin Senate campaign might be defined more by the governor’s race, where the divisive Walker will go before voters for the fourth time in eight years.

“For Tammy’s camp, she probably would rather take on someone who’s close to Walker,” the GOP operative told me. “She can be the Walker slayer. She can take out her Senate opponent and Scott Walker if things go really well.”