“He will be missed dearly”: Joe Biden and Barack Obama release statements on John McCain’s death 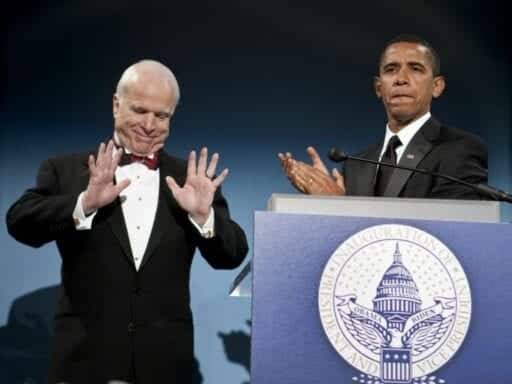 Former President Barack Obama, Sen. John McCain’s rival in the 2008 presidential election, paid tribute to the Arizona Republican, who died at the age of 81 on Saturday. Obama called McCain a figure who had “the courage to put the greater good above our own” to which all Americans should aspire.

Obama, who defeated McCain in 2008, has shown a public affection for the senator for years. Obama in 2013 called McCain a “person of classic integrity” who’s “willing to say things regardless of the politics.” And when McCain announced his cancer diagnosis last year, Obama told him to “give it hell.”

In a lengthy statement on Saturday, Obama focused on the pair’s commonalities despite their political and generational differences.

“[W]e shared, for all our differences, a fidelity to something higher — the ideals for which generations of Americans and immigrants alike have fought, marched and sacrificed. We saw our political battles, even, as a privilege, something noble, an opportunity to serve as the stewards of those high ideals at home, and to advance them around the world,” he said. “We saw this country as a place where anything is possible — and citizenship as our patriotic obligation to ensure it forever remains that way.”

He said he and former First Lady Michelle Obama sent their condolences to McCain’s wife, Cindy McCain, and their family. Obama is reportedly expected to be one of the eulogists at McCain’s funeral service.

Our statement on the passing of Senator John McCain: pic.twitter.com/3GBjNYxoj5

Former Vice President Joe Biden, who spent years alongside McCain in the Senate, also reacted to McCain’s death on Saturday.

“John McCain’s life is proof that some truths are timeless. Character. Courage. Integrity. Honor. A life lived embodying those truths casts a long shadow,” he said. “John McCain will cast a long shadow. His impact on America hasn’t ended. Not even close.”

Biden, whose son Beau died of the same form of cancer as McCain had, in a tweet highlighted McCain’s multifaceted career — a Naval Academy graduate, a fellow senator, and a political rival.

“But, to me, more than anything, John was a dear friend,” he said. “He will be missed dearly.”

John McCain was many things – a proud graduate of the Naval Academy, a Senate colleague, a political opponent.

But, to me, more than anything, John was a friend. He will be missed dearly. pic.twitter.com/AS8YsMLw3d

Democrats introduce article of impeachment against Trump
How Judas and the Black Messiah’s two lead actors wound up with supporting actor Oscar nods
The $2.2 trillion stimulus can’t be the last thing Congress does on coronavirus
4 reasons we’re seeing these worrying coronavirus variants now
Welcome to the Romance Issue of Vox’s The Highlight
Billions of wire hangers are used in the US every year. Almost no one buys them.