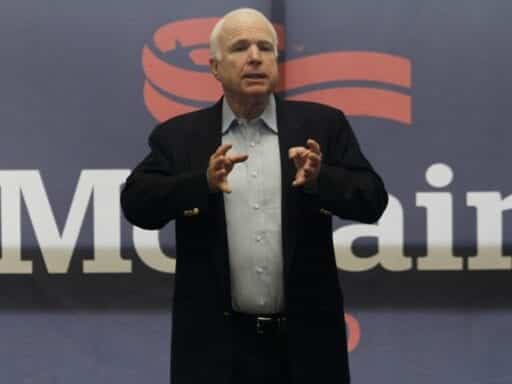 McCain’s work on campaign reform cemented his image as an iconoclast.

From today’s viewpoint, a government awash in money of murky billionaire provenance, John McCain’s best-known legislative achievement, the Bipartisan Campaign Reform Act of 2002 (aka McCain-Feingold), might seem like a dead letter — irrelevant or worse.

But at the time it passed, the bill was correctly treated as a bit of a miracle, not easily explained by normal political calculations. McCain and co-sponsor Russ Feingold, a progressive Democrat representing Wisconsin, had little institutional power and were regarded by their colleagues as moralists, rather than the wheeler-dealers who are presumed to get things done in the Senate.

Neither Democratic nor Republican leaders were enthusiastic about it, though Democrats ended up voting for it on principle (despite expecting it would hurt them). All but a few Republicans opposed the most significant legislation on money in politics since the 1970s. And, unlike today, there was no significant grassroots movement behind the reform.

The bill remains central to the legacy of McCain, who died Saturday. He was also one of a very few presidential candidates to put campaign reform at the center of his platform, which helped him win the New Hampshire primary in 2000. But over the whole arc of his career, the issue of campaign reform did more for the Arizona senator, cementing his image as an iconoclast, than he was able to do for the cause of reducing the influence of money in the political system.

Conventional wisdom holds that McCain-Feingold was a reaction to that year’s Enron scandal — in which a high-flying energy company built on accounting fraud collapsed abruptly — and the wave of high-profile, white-collar prosecutions that followed. But while Enron executives did cultivate political allies, there’s not much about that accounting scandal that would have obviously led to a campaign finance bill. Credit for McCain-Feingold belongs to its two sponsors above all, not circumstance or public pressure, which is unusual for major legislation. Theirs was the only bill passed in that first term of George W. Bush without the strong support of the President. McCain’s skill and persistence brought attention to the issue and moved the bill effectively through a largely uninterested Congress, under an ambivalent president.

In this task he had a strong psychological motivation: a personal wish to wipe out the stigma of his mostly undeserved inclusion in the Keating Five, a group of senators who had gone overboard in helping a failed savings and loan owned by a major donor, Charles Keating, in the late 1980s.

Substantively, McCain-Feingold is best understood as an effort to fix problems identified in the 1996 and 1998 elections, when first Democrats and then Republicans figured out how to use funds designated for party-building — including money from corporations and unions that even now can’t give directly to campaigns — to win elections. Parties couldn’t use that unlimited “soft money” for full-out election campaign ads, but the tag line, “Call Congressman Jones and ask him why he loves raising taxes,” had basically the same effect as an ad that said, “Don’t vote for Jones.”

Soft money could pay for those ads. And soft money had swollen to about $200 million by 1998, about one third as much as all candidates from both parties put together.

McCain-Feingold closed the soft-money loophole for parties, but there was still the possibility that outside political groups could run similar ads that stayed narrowly on the right side of the line, defined by what was called the “magic words” test. (That is, they had to avoid certain specific phrases like “Vote for,” “elect,” etc.) A separate group of legislators, led in the Senate by Olympia Snowe of Maine and Jim Jeffords of Vermont, crafted a provision defining any ads mentioning a candidate by name within 30 days of a primary or 60 days of a general election as election ads, requiring that they be paid for with “hard money,” raised in limited amounts from individuals.

That key provision of McCain-Feingold became the nexus for the legal cases that would transform campaign finance law over the next decade. The law mostly survived its first challenge in the 2003 case, McConnell v. FEC, bolstered by an extensive body of evidence that these “issue ads” were indistinguishable from campaign ads.

But over the remainder of the decade, as the Rehnquist Court evolved into the Roberts Court, with its business-friendly interpretation of the First Amendment, this provision was slowly unwound, and ultimately discarded entirely in Citizens United. In that fateful decision, the court held that corporations and unions had the same right as individuals to fund ads supporting or opposing a candidate by name, as long as they operated independently of campaigns or parties.

On its own, Citizens United didn’t wipe out McCain’s campaign finance legacy, but the following year a circuit court cited Citizens United to allow the creation of SuperPACs, which allow individuals and corporations to combine their unlimited contributions to influence elections, as long as they don’t coordinate with campaigns or parties. Along with politicized non-profit groups, which don’t disclose donors, such outside groups now routinely spend more than the candidates themselves in the highest profile races, such as recent special elections. And most of these “dark money” organizations, such as the Congressional Leadership Fund (the biggest spender on behalf of Republicans in recent elections, seeded with $20 million from casino magnate Sheldon Adelson and his wife), operate fully on behalf of one party. Even interest groups such as the NRA, which in the past strategically supported some Democrats who opposed gun regulation, is now effectively an arm of the Republican Party.

As a result of several court decisions, the abdication of enforcement by both the Federal Election Commission and the IRS (which should have cracked down on political activity by non-profit groups), and a shift in political culture as operatives have tested the limits of what they could get away with, the broken campaign finance system McCain and Feingold sought to fix in 2002 has roared back, with several more zeroes at the end of each spending figure. Money from corporations and billionaires like Adelson no longer moves through official party committees, as it did in the “soft money” era, but that’s a meaningless distinction.

Even as his 2002 achievement was slipping away, McCain held on aggressively to his role as the leading — and usually the only — Republican advocate on the issue. While senators often seek to “own” an issue by mastering details, sponsoring the key legislation, or chairing the relevant subcommittee, McCain took the concept of issue ownership almost literally.

Nothing related to campaign reform, lobbying or related issues could happen without him. To be taken seriously, any reform would need bipartisan support, and McCain, on this issue, had cornered the market on bipartisanship. Even a Democrat who stepped onto McCain’s well-guarded lane would feel his wrath — as a new senator named Barack Obama learned in 2006 when he sought to join an effort for lobbying reform, but with a strategy that differed slightly from McCain’s preference.

A blistering and sarcastic letter from McCain to his future presidential rival concluded, “I have been around long enough to appreciate that in politics the public interest isn’t always a priority for every one of us. Good luck to you, Senator.”

While warning off any politicians who would encroach on his territory, McCain also discouraged consideration of any approaches to money in politics other than the effort to limit outside spending.

But his preferred approach, centered on closing loopholes and tightening limits, was showing its inherent weaknesses, among them the hostility of conservative judges. Meanwhile, new approaches that used public financing to encourage candidates to stay within the regulated system and to reach out to small donors were showing promise, including in McCain’s home state.

“Clean elections” programs, which provide qualified candidates with a fixed amount of public money sufficient to run and be heard, were beginning to show promise, not least in Arizona, where voters adopted it by initiative in 1998. So did systems that encourage small donations by matching them with public dollars, as in New York City. Most recently, campaign vouchers that enable every citizen to be a donor have been put to the test in Seattle, and seem effective at broadening the base of donors and making it easier for grassroots candidates to run and be heard.

But aside from a brief gesture of support for Arizona’s “Clean Elections” program, McCain did nothing to encourage these new approaches, and if there had been any other Republicans inclined to support them, the prospect of facing the wrath of McCain on one side, and their party’s Senate leader Mitch McConnell on the other — opposition to all campaign finance regulation is a central pillar of his ideology — was surely a deterrent.

John McCain was not the first conservative Republican to support restrictions on the influence of big money in politics. (Well before the McCain-Feingold bill, there was Goldwater-Boren, sponsored in 1985 by the conservative icon who was McCain’s Senate predecessor.) But McCain well may be the last fighter to attempt to limit money in politics, because in our new world, vast differences in forms of financing between the two parties (though not in total amounts spent) make mutual disarmament difficult to achieve. Republicans are dependent on SuperPACs and political non-profits, while Democrats appear to be building a funding apparatus based heavily on small donors.

No reform will have as balanced an effect across parties as the soft-money ban did, but changes to the fundamental rules of democracy have traditionally needed cross-partisan assent. Unlike 2002, there is now an intense grassroots mobilization to moderate the role of money in politics; unfortunately it’s entirely concentrated in one party and still overly focused on the idea of amending the Constitution to reverse Citizens United.

John McCain deserves great admiration for his signature legislative achievement. But it’s unfortunate that over the long period in which the Arizona senator dominated the cause of campaign reform, he did too little to broaden the range of solutions beyond those designed to solve a problem from 1998.