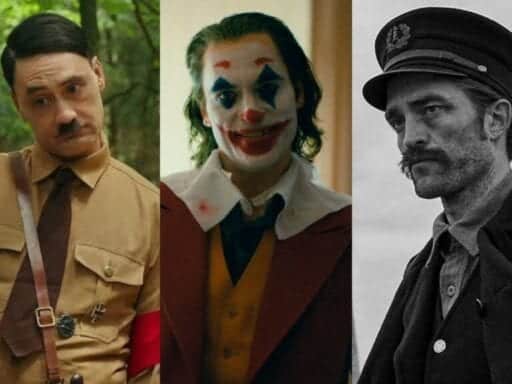 From Joker to Jojo Rabbit, The Lighthouse to a new Zombieland, here are the movies to see this month.

Now that 2019’s major film festivals have concluded, the movies that won over audiences and juries are starting to hit theaters — and there are a lot of great options to choose from.

October’s movie menu runs a full gamut, from critically acclaimed drama and social horror to biting political critique and highly anticipated comedy. Several probable Oscar nominees are about to arrive on a big screen near you. There’s a wild salty nightmare of a horror flick, a high-spirited biopic, a quiet meditation on love and aging, and, the most argued-about comic book movie in a long while.

Here are the 13 most noteworthy movies to see this October.

In Pain and Glory, Antonio Banderas turns in a career-best performance as aging film director Salvador Malio. Throughout the film, Malio encounters a series of people, both in person and in his memory, who represent important moments of creative, spiritual, and sexual awakening in his life — including his mother, played by Penélope Cruz, and a former lover, played by Leonardo Sbaraglia. It’s hard not to read the film as a personal reflection centered on its actual director, Pedro Almodóvar, who will turn 70 just days before the film’s US release. As such, it’s one of Almodóvar’s warmest and most poignant works in years.

Dolemite Is My Name (October 4 in theaters; streaming on Netflix October 25)

Starring Eddie Murphy, Dolemite Is My Name is an exuberant biographical drama about Rudy Ray Moore. Murphy is likely to generate awards buzz for his buoyant performance as Moore, the envelope-pushing filmmaker who portrayed the character of Dolemite — a smooth-talking, yarn-spinning pimp — in blaxploitation films and standup comedy during the 1970s, and who is considered by many to be the “godfather of rap.” Craig Brewer (Hustle & Flow, Black Snake Moan) directs the project from a screenplay by Scott Alexander and Larry Karaszewski, the writers of movies like Ed Wood and The People vs. Larry Flynt. Keegan-Michael Key, Mike Epps, Craig Robinson, Tituss Burgess, Wesley Snipes, Chris Rock, and Ron Cephas Jones also star.

Joker is undoubtedly one of the year’s most talked about movies. Starring Joaquin Phoenix, it’s a gritty reimagining of the character’s early days, directed and co-written by Todd Phillips. Phillips has spent his career bringing a particular breed of pleasure-obsessed American masculinity to the big screen with successful, unforgettable side-splitters like Old School and the Hangover trilogy. And Joker is a well-crafted movie that boasts an excellent performance by Phoenix as it tells the story of an impoverished, failed standup comedian who feels as if the world has gone mad and so turns to violence and chaos. But while the movie has actively courted controversy relative to the average superhero film, touting its “hard-R rating” even though there’s no such thing, there’s nothing particularly “bonkers” about it. It’s worth seeing, both for Phoenix’s performance and so you can participate knowledgeably in the conversation surrounding the film. But don’t expect to have your world turned upside down. Robert De Niro, Zazie Beetz, Bill Camp, and Frances Conroy also star.

It’s difficult to categorize a Bong Joon-ho film: The director excels at movies that explode boundaries. His darkly comedic monster films like The Host and Okja, double as biting social commentaries, often aiming barbs at inequality, particularly in his native Korea. Parasite returns to those themes with superb control; it’s a bleakly comic story about two families, one wealthy and one not so wealthy, that’s a caustic tale of class conflict. (At times it plays like a dark inversion of last year’s Shoplifters.) At Cannes, the film won Bong the Palme d’Or in a unanimous decision by the jury — and in so doing, became the first Korean film to win the festival’s top prize.

Ang Lee’s next film is a big budget science fiction action thriller about an assassin who’s trying to escape a younger clone of himself. Will Smith stars as both the present-day version of himself and a carefully CGI-animated version of himself in his early 20s. Clive Owen, Mary Elizabeth Winstead, and Benedict Wong round out the cast.

Tim Heidecker (one half of the comedy duo Tim & Eric) plays a version of himself in this campaign movie spoof from director Eric Notarnicola (Nathan for You, Who Is America). After narrowly escaping conviction for the murder of a group of people at a music festival he organized, Heidecker vows to run for district attorney against the man who tried to put him behind bars. Mister America is the chronicle of his comically disorganized and corrupt campaign. Terri Parks, Gregg Turkington, and Curtis Webster also star.

The King (October 11 in theaters; streaming on Netflix November 1)

Timothée Chalamet (Call Me By Your Name) stars as Henry V in this adaptation of Shakespeare’s Henriad, directed by David Michôd from a screenplay by Michôd and Joel Edgerton. In this version, Prince Hal ascends the throne upon his father’s death and finds that there’s a lot to navigate in his new position, from politics and intrigue to war. “The film namechecks Shakespeare while dispensing with both his dialogue and most of his plot, which is certainly a bold choice. Joel Edgerton, Sean Harris, Lily-Rose Depp, Robert Pattinson, and Ben Mendelsohn also star.

The Lighthouse, from The Witch director Robert Eggers, strands Willem Dafoe and Robert Pattinson on an island with a lighthouse and some devious seagulls, and surrounds them with a fierce sea. The film is somehow a whacked-out period comedy populated by saltily bearded sea dogs; a psychosexual drama about dramatically fractured psyches; a Beckett-style dive into guilt and shame; and, at times, kind of a takeoff on Aquaman. Shot in grainy black and white and in Academy ratio (which appears square to most audiences), it’s a movie made by a director who knows just what he’s going for and just how to get there — and a rockingly wild time at the movies.

Director Taika Waititi follows up his 2017 Thor installment with Jojo Rabbit, a dark comedy about a young boy in Nazi Germany, whom everyone says is a “scared rabbit,” and his imaginary friend. That imaginary friend is one Adolf Hitler, and while the film is a little too sprightly to land any heavy punches — it’s more of a comedy with satirical elements than a true satirical tale — it’s best as a coming-of-age story about a kid who’s gotten lost in a world where loyalty has displaced love and where bravado has displaced true bravery. It’s a bold move to marry a coming-of-age narrative, which Jojo sets at the end of the Third Reich, to Waititi’s signature goofball aesthetic and frenetic self-awareness; the film is more successful in some moments than others. But by the end, it’s obvious what Jojo Rabbit is really about: how hate preys on the weak and the young, and how history keeps repeating itself.

The Laundromat (streaming on Netflix October 18)

Cinema’s busiest director, Steven Soderbergh, returns with a comedy-drama about the Panama Papers, millions of documents leaked in 2016 that exposed corruption and tax avoidance by billionaires around the world. The film unspools like a series of interconnected vignettes, all centered on the massive trove of information. Its story is narrated by Jürgen Mossack and Ramón Fonseca Mora (played by Gary Oldman and Antonio Banderas), who act as our guides to the complicated regulatory and economic matters that enabled massively wealthy individuals to avoid paying taxes on their money, often by hiding it in offshore accounts. In real life, Mossack and Fonseca owned the world’s fourth-largest provider of offshore financial services, which closed down in 2018 largely due to the revelations from the Panama Papers, and the pair spent a few months in jail. The Laundromat is a disjointed film that’s not entirely convincing in its indictment of the very wealthy, but as a way to understand the Panama Papers and the scandals around them, it can’t be beat.

It’s been a decade since the first Zombieland, the beloved screwball action horror comedy about people trying to outrun zombies after the apocalypse, which brought together some fantastic talent, including Emma Stone, Jesse Eisenberg, Woody Harrelson, and Abigail Breslin. As Zombieland: Double Tap arrives in 2019, it turns out the undead have evolved. So returning characters Wichita (Stone), Little Rock (Breslin), Tallahassee (Harrelson), and Columbus (Eisenberg), who’ve all apparently survived the last 10 years, must now also evolve, unless they want to turn up dead. (Or undead.) Zoey Deutch also stars.

Written and directed by Ira Sachs (Little Men, Love Is Strange), Frankie is a modest and quietly deep story about a family adjusting to change. Title character Frankie (Isabelle Huppert) is a world-renowned actress who summons her family — her husband (Brendan Gleeson), son (Jérémie Renier), stepdaughter (Vinette Robinson) and family, and her ex-husband (Pascal Greggory) — to the idyllic landscape of Sintra, in Portugal. She also invites an old friend (Marisa Tomei), who brings along her boyfriend (Greg Kinnear). Over the course of a day of conversations, old relationships are realigned and new ones are formed. All things in life eventually end; Frankie suggests those endings can be as beautiful as the beginnings.

The Current War has traveled a rough path to theaters. After a tepid reception at its Toronto premiere in September 2017, the film became a casualty of the revelations about its executive producer, Harvey Weinstein, which broke the following month and took Weinstein’s company down with him. Alongside other affected movies like The Upside, The Current War sat on the shelf until the remaining Weinstein slate was purchased by Lighthouse Entertainment in July 2018.

Now, edited and reworked by its director Alfonso Gomez-Rejon, the 19th century period piece is finally being released. Benedict Cumberbatch and Michael Shannon star as inventors Thomas Edison and George Westinghouse, locked in a battle to create and fuel America’s power grid. It’s a visually slick drama that suffers from an unavoidable problem — the fight for dominance between various types of electrical current simply doesn’t translate very well into onscreen tension — but it’s still worth a watch for its style and historical interests.

Some front-line workers are now eligible for the vaccine. Employers might pay them to get it.
Vox Sentences: Hurricane Florence heads to the East Coast
Google employees protest the company’s “attempt to silence workers”
The incredibly absurd Trump/CNN SharpieGate feud, explained
People are using Facebook more than ever during the coronavirus pandemic — but its business is still...
How a single cloud computing customer caused half the internet to go dark