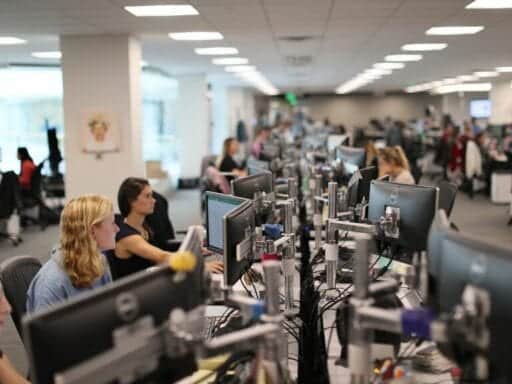 Share
Loading...
Employees at work at the Wayfair offices in Boston on July 31, 2018. | Suzanne Kreiter/The Boston Globe via Getty Images

Guess which states ban businesses from silencing employees who discuss their salaries.

Workers in Arizona have the right to paid sick leave. Breastfeeding mothers in Oregon get time to pump milk at work. In New York, employers must give workers two weeks notice of their schedule.

While Congress may not be accomplishing much these days in regards to labor laws, dozens of state legislatures have been super-busy in the past few years giving workers more rights than ever before.

A new report from Oxfam America, an anti-poverty group, analyzed labor policies in all 50 states and the District of Columbia, ranking the best to worst places to work in 2019. Surprisingly, not all the best places to work are liberal states (though a lot of them are there). The states with the worst labor practices, however, are mostly in the South.

Oxfam researchers ranked states by evaluating policies on wages, worker protections, and union rights. For example, the report compares a state’s minimum wage to what it would cost to support a family of four. (In Virginia, it would take four minimum wage jobs.)

It also notes whether or not state law allows cities and counties to pass their own minimum wage increases; takes into account policies that protect workers from abuse and exploitation, especially women and working parents; and looks at how easy it is for workers in a certain state to form labor unions. Unsurprisingly, Republican-controlled states that have passed right-to-work laws to weaken labor unions fell toward the bottom of the list.

Better work conditions is more than a labor issue, too. Oxfam researchers found a link between states with strong labor laws and states with higher life expectancy, median income, and labor force participation as well as lower poverty and infant mortality rates.

I know DC isn’t technically a state, but if it were, the District of Columbia would rank at the very top. The nation’s capital has a huge workforce, and it’s easy to join a labor union there. The minimum wage ($14 an hour) is pretty high compared to other states. But it would still take a least two minimum-wage jobs to support a family of four.

The District has also passed a slew of labor laws that guarantee certain benefits to workers. For example, it’s illegal to pay women and people of color less than someone else doing the same job. DC requires businesses to accommodate pregnant workers and provide space for breastfeeding mothers to pump milk. Workers get paid family leave and paid sick days. Employers must provide advance notice of scheduling changes. DC also provides workers with sexual harassment protections.

There are only two worker protections included in the report that the District doesn’t offer. First, it doesn’t require companies to restrict access to an employee’s salary history, which would help reduce the gender and racial pay gap. Second, it doesn’t guarantee flexible scheduling options for low-wage workers. But DC seems to be doing more for workers than states. So it’s not all that surprising that DC has the highest median household income and GDP per capita than every state in the nation.

California moved from the third best state to work in 2018 to the second best this year. That’s mostly because of a dollar bump in the minimum wage (now $12), which shrank the gap between the minimum wage and the cost of supporting a family of four ($30.68 an hour). It now takes about 2.5 minimum wage jobs.

The state also makes it easy for most workers to join labor unions and provides all of the worker protections that DC does, though it also doesn’t guarantee flexible scheduling for low-wage workers.

California has one of the highest life expectancies in the country (80.9 years) and a high median household income.

Washington dropped from second place to third place this year because the minimum wage increased by only 50 cents. Washington doesn’t require employers to accommodate breastfeeding mothers like California or DC, and it doesn’t make employers give workers flexible scheduling and advance notice of scheduling changes. Washington also ranks toward the top when it comes to GDP per capita ($56,831).

It’s striking to see Virginia at the bottom, considering it shares a border with DC. But here’s one major reason why: Virginia has the largest gap between its minimum wage ($7.25) and the bare minimum needed to support a family of four ($27.83). It takes four minimum wage jobs to do that.

The state does mandate equal pay for workers of different races and genders, but that’s the only job protection under state law.

Virginia doesn’t require accommodations for pregnant workers. It doesn’t offer protections for workplace breastfeeding. It doesn’t ban pay secrecy rules in the workplace. The state doesn’t restrict access to a candidates’ salary history, which would help reduce the gender and racial pay gap. It doesn’t provide paid family leave or any sort of paid sick leave. It does not provide job protections for workers who need to take more than four months off to care for a relative or child. It doesn’t require employers to provide flexible scheduling or advance notice of shift scheduling. It does not provide workers with sexual harassment protections under state law.

Virginia is also one of 27 states that have passed right-to-work laws. In those states, it’s illegal for unions to charge any fee to employees at unionized workplaces if they don’t want to pay union dues. In most states, unions can charge what is known as an “agency fee” to workers who don’t want to be members but who still get the benefits of collective bargaining. Right-to-work laws outlaw that practice, which can strain their finances and give workers an incentive not to pay dues. This is known as the “free-rider” problem, in which some workers benefit from union contracts but choose not to pay for the cost to negotiate them.

When it comes to median income, GDP per capita and life expectancy, Virginia ranks roughly in the middle.

Mississippi often ranks last when it comes to health outcomes, education, and poverty. This time, the state avoided the bottom because it allows public school teachers to unionize and negotiate wages. It also has a smaller gap between the minimum wage ($7.25 an hour) and the cost of raising a family of four ($24.25 an hour), though it still takes three minimum-wage jobs to do that. Mississippi guarantees zero benefits and job protections for workers.

It’s not a coincidence that Mississippi is also the poorest state in the country, with the highest rate of infant mortality.

Workers in Alabama do have one right under state law: The state does restrict employers from sharing salary information, which helps reduce the gender and racial pay gaps. That’s it. Government employees don’t have a right to unionize, and the state has made it hard for workers in the private sector to do so.

It also has a smaller gap between the minimum wage and the cost of living than both Virginia and Mississippi. The minimum pay rate is $7.25 an hour, but workers would need to earn $23.92 an hour to support a family of four.

Alabama also has one of the highest poverty rates and lowest life expectancies in the US.

You can check out labor policies in every state here.

Bill Clinton’s argument for defeating Trump: A new, fairer economy
The pandemic is forcing women out of the paid workforce in droves
The Des Moines Register’s Warren endorsement could help her in a tight race
Why Alaska’s Senate and House races look competitive in 2020
Silicon Valley’s top investing firm has a stark message on coronavirus: Prepare for the worst
Birds of Prey finds the fun in Harley Quinn’s breakup and breakdown