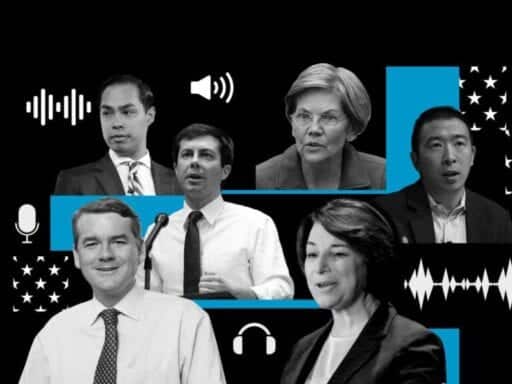 From Buttigieg on rural America to Warren on breaking up Big Tech, these episodes dive into how candidates think about policies that affect your lives.

Democratic veterans and newcomers alike have lined up to challenge President Trump in the 2020 election. With the field more crowded than it’s been in years, it can be easy to get lost in the horse race — and hard to keep track of where candidates stand on the issues that affect people’s lives.

From South Bend, Indiana, Mayor Pete Buttigieg talking about climate change and rural America on Recode Decode to Sen. Elizabeth Warren sharing her plan to break up Big Tech on The Ezra Klein Show, here are nine Vox podcast episodes that will help you learn how the candidates think about policies that affect your lives. Happy listening.

Recode Decode: Michael Bennet talks with Recode’s Kara Swisher about the intersection of social media and politics, and running for president in 2020. This episode includes discussion of Denver schools and the racial education gap; Bennet’s assessment of his past 10 years in the Senate; why people voted for Trump; the changes in Washington; and why Frederick Douglass (and you) are founders of America.

Swisher and Bennet also talk about why Bennet believes he can win; politicians who over-index on Twitter and the “downward spiral” of social media; “the Russians, for Christ’s sake”; whether tech companies should be broken up; Facebook’s regulation of speech; keeping America innovative; fixing education; the 90 percent of Americans not benefiting from economic growth; universal health care; why a Democrat can win in 2020; and Kamala Harris in the first Democratic debates.

The Ezra Klein Show: “I’m not sure what I expected Sen. Michael Bennet’s answer to be when I asked him why he was running for president,” says Ezra Klein. “I didn’t expect it to be ‘Mitch McConnell.’” Since arriving in the Senate in 2009, Bennet has built a reputation as a senator’s senator. He’s smart and measured, thoughtful on policy, and good at working across the aisle. Klein mentions that he’s had colleagues say they wish Bennet would run for president, that he’s the kind of guy the country needs.

That’s the conversation, and at times argument, Bennet and Klein have in this podcast, and it’s an important one. Bennet’s critique is angry and sweeping. But are his solutions as big as the problem he identifies? They also talk about his plan to end extreme childhood poverty, which Klein thinks is one of the most important proposals in the race, his view that rural America is the key to passing climate legislation, why he opposes Medicare-for-all, what to do about the filibuster, and much more.

Recode Decode: Pete Buttigieg talks with Recode’s Kara Swisher about his campaign for president of the United States. They touch on systemic racism and Buttigieg’s “Douglass Plan”; mobilizing black women voters; how to appeal to Trump supporters who wanted to “burn the house down”; reforming the Supreme Court; the “mystical fascination” with the Rust Belt; climate change and rural America; and why Buttigieg hasn’t attacked tech as much as some of his opponents.

Should Americans have a right to be forgotten online? Will more regulation make it harder to compete with China? Buttigieg answers those questions, along with talking about recognizing gig workers as employees with the right to unionize and his wealthy tech donors. Also covered: being gay in the military, and whether voters will care that Buttigieg is gay; plus his husband and LGBTQ visibility in politics. And lastly, Alexandria Ocasio-Cortez’s “Squad” versus Nancy Pelosi; and Buttigieg’s favorite president, Abraham Lincoln.

The Ezra Klein Show: There’s been plenty of discussion of Buttigieg’s biography, and of whether a midsize-city mayorship is appropriate experience for the presidency. But Klein wanted to talk to him about something else: his theory of political change. How, in a broken system, would he get done even a fraction of what he’s promising? “To my surprise,” Klein writes, “he actually had an answer. Before I did this podcast, I was surprised to see Buttigieg catching fire. Now that I’ve had this conversation, I’m not.”

The Weeds: The South Bend mayor joins co-hosts Matt Yglesias, Jane Coaston, and Dara Lind to talk about revitalizing the Midwest without nostalgia, his case for prioritizing political reform, and the potential meaning of generational change from the first millennial to run for president.

Recode Decode: Bill de Blasio, the mayor of New York City, talks with Recode’s Kara Swisher about why he’s still running for the Democratic nomination in 2020; the threat of job automation and his proposed “robot tax”; and how de Blasio thinks about the future of transit in New York and beyond. He also talks about how the plan for New York to become one of Amazon’s “HQ2” locations fell apart, and why he supports both a national privacy bill and tougher antitrust action against Facebook and Google.

The Ezra Klein Show: “I’m careful about inviting politicians onto this podcast,” says Ezra Klein. “Too often, questions go unanswered, and frustrated emails flood my inbox. So I only bring on candidates now if there’s a conversation directly related to themes of this show. In this case, there is.

There’s a quiet moral radicalism powering Julián Castro’s presidential campaign. Laced through his policy agenda are proposals to decriminalize the movements of undocumented immigrants, to involve the homeless in housing policy, to establish American obligations to those displaced by climate change, to protect animals from human cruelty.

This is an agenda to expand the moral circle, to redefine who counts in the ‘we’ of American politics. I asked Castro if this wasn’t all a step too far, if Democrats didn’t need to play it safer to eject Trump from office in 2020. This broader moral vision, he replied, ‘is not just trying to backfill the negative. It gives people a positive purpose that they can reach for. That’s what I’m trying to do.’ This is a candidate interview worth hearing.”

The Weeds: The former HUD Secretary and San Antonio mayor joins co-hosts Matt Yglesias, Jane Coaston, and Dara Lind for a very deep dive into federal housing policy, plus his views on immigration, presidential personnel, and how to set priorities.

Recode Decode: Amy Klobuchar talks with Recode’s Kara Swisher in front of a live audience at South by Southwest. In this episode, Klobuchar and Swisher discuss the infamous comb incident; why Klobuchar thinks she can win; Big Pharma and Big Tech; and why Klobuchar is aiming for the center while her fellow Democrats are pulling left.

You’ll also hear what Klobuchar learned from studying Hillary Clinton’s 2016 loss; her thoughts on the crowded Democratic field; and more about the need for urgent action on climate change. Policy discussions include Elizabeth Warren’s proposal to break up the tech companies and Klobuchar’s own agenda for tech; whether she thinks Facebook and Google should be broken up; the prospects of a federal data privacy bill; and whether she trusts tech companies.

Also in this episode: Paul Manafort’s initial prison sentence; the Mueller report; President Trump’s coziness with Vladimir Putin and his attacks on the press; impeachment; Rep. Ilhan Omar’s comments on Israel; and which politicians Klobuchar looks up to.

The Ezra Klein Show: Oligarchic capitalism? Elizabeth Warren has a plan for that. Opioid deaths? She’s got a plan for that too. Same is true for high housing costs, offshoring, child care, breaking up Big Tech, curbing congressional corruption, indicting presidents, strengthening reproductive rights, forgiving student loans, providing debt relief to Puerto Rico, and fixing the love lives of some of her Twitter followers. Seriously.

But how is Warren going to pass any of these plans? Which policy would she prioritize? What presidential powers would she leverage? What argument would she make to her fellow Senate Democrats to convince them to abolish the filibuster? What will she do if Mitch McConnell still leads the Senate? What about climate change? Ezra Klein caught her on a campaign swing through California to ask her about that meta-plan. The plan behind her plans. Warren’s easy fluency with policy is on full display here, but it’s her systematic thinking about the nature of power, and what it takes to redistribute it, that really sets her apart from the field. We don’t want to shock you, but: She’s got a plan for that too.

Recode Decode: Marianne Williamson talks with Recode’s Kara Swisher about her campaign to be the Democratic nominee for president in 2020. Williamson explains why she’s still in the race even though she didn’t qualify for the third debate and talks about what she has learned from running as an non-establishment candidate; negativity and anger on social media; and how she thinks about the tech industry — and vice versa. She and Swisher also discuss her entrepreneurial journey; her divisive comments about religion, vaccines, and medication; and what Williamson would do if she were CEO of Twitter.

Recode Decode: Andrew Yang talks with Recode’s Kara Swisher about his campaign to be the Democratic nominee in the 2020 presidential race. This episode includes Yang’s thoughts on being “the tech candidate” during the techlash; the #YangGang; his version of universal basic income, the Freedom Dividend, and the challenges of UBI and how to convince people that it’s a good idea. Swisher and Yang also cover job automation and the “robot apocalypse”; why the unemployment rate isn’t as low as you think; what future jobs will look like; and Yang’s vision of “human-centered capitalism.”

Keep up with the policy debates that will shape the Democratic 2020 primary by reading Vox’s guide to where 2020 Democrats stand on policy. And join our Facebook group for listeners of The Weeds for more policy and politics discussions.

Jupiter at opposition: Monday is the best night of the year to look at the gas giant
The coronavirus crisis is leading to an immunization crisis
Poll: The majority of Americans now support impeachment
The right way to play Monopoly
Congress finally passes $19 billion in disaster aid
The strong economy is an opportunity for progressives