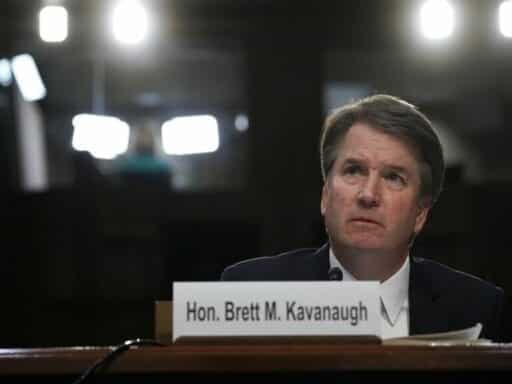 He won’t talk about executive power … and he coaches a basketball team.

Lawmakers also focused heavily on Kavanaugh’s inconsistencies between his 2006 confirmation testimony and documentation that’s emerged since, as well as questionable meetings he may have had pertaining to the Mueller investigation. And they hammered on concerns that the vetting process for Kavanaugh — which has been incredibly partisan — has not been transparent enough.

Rather than respond to many questions directly, Kavanaugh argued that the “Ginsburg rule” meant he couldn’t answer. (The rule is a tradition of Supreme Court nominees to avoid previewing how they’d rule on future cases. He also deflected on ongoing cases, such as Texas v. Azar, a current suit challenging the constitutionality of health care protections for those with preexisting conditions.)

Instead, Kavanaugh reiterated his support for precedent on various issues, including Roe v. Wade — a pledge that doesn’t necessarily guarantee anything, since the Supreme Court has the authority to overturn precedent, something Kavanaugh himself acknowledged in an email obtained by the New York Times.

While Tuesday’s kick-off marked one of the most chaotic points of the hearing, Wednesday and Thursday offered a decent amount of theatrics as well. On both days, Kavanaugh’s testimony was once again punctuated by repeated yells and protests from activists in the audience. “You’re gaslighting the American people,” one said. “This is a democracy, not the mafia. You’re doing business for a criminal,” said another.

Democrats on Thursday also took issue with the committee’s decision to deem many documents “confidential,” even though they didn’t contain any particularly sensitive information.

Some of the most contentious exchanges focused on sexual harassment and race — with Sen. Mazie Hirono (D-HI) pressing Kavanaugh on his awareness of the many allegations of harassment faced by retired appeals court judge Alex Kozinski, and Sen. Cory Booker (D-NJ) questioning statements Kavanaugh has made on affirmative action and government assistance.

Here are some of Kavanaugh’s answers — and non-answers — on several key topics.

Kavanaugh’s views on executive power have been among the most contentious aspects of his record because of a 2009 Minnesota Law Review article suggesting that a sitting president should not be subject to a criminal investigation until after Congress has impeached him. In that same piece, he also suggested that the indictment of a sitting president would be exceedingly burdensome.

Multiple lawmakers called on Kavanaugh to explain the views espoused in this Law Review write-up as well as his perspective on whether a president is able to engage in actions like pardoning him or herself. For most inquiries, Kavanaugh simply dodged by noting that he couldn’t possibly answer “hypotheticals.”

On whether a sitting president can be subpoenaed: I can’t give you an answer on that hypothetical.

On whether a sitting president can pardon himself: The question of self-pardons is something I’ve never analyzed. … It’s a hypothetical I can’t begin to answer.

(In the 2009 article, Kavanaugh does argue that criminal investigations could prove distracting to a sitting executive. And as the Washington Post points out, in a footnote of that 2009 piece, Kavanaugh even begins to touch on the constitutionality of indicting a sitting president. “Even in the absence of congressional conferred immunity, a serious constitutional question exists regarding whether a president can be criminally indicted and tried while in office,” he writes.)

And more on that 2009 Minnesota Law Review article: They were ideas for Congress to consider. They were not my constitutional views. … I’ve only put out proposals for you all to study to think about a president fighting a war, leading a war.

On recusing himself from a case involving the president that could come in front of the Supreme Court: I should not and may not make a commitment about how I would handle a particular case.

On whether the president is “above the law”: No one is above the law. … [As judges,] we are not supposed to be influenced by political pressure from the executive or from the Congress. We are independent. … My only loyalty is to the Constitution.

On whether he still believes the president can fire a prosecutor criminally investigating him at will: I think all I can say, Senator, is that was my view in 1998.

On what constraint exists on the president if he or she can fire a special counsel: That hypothetical was tested in … 1973 and the system held.

On US v. Nixon — a Supreme Court case addressing whether Nixon needed to respond to a subpoena for materials tied to the Watergate break-in — something he previously said was perhaps “wrongly decided”:

In June, Texas led a series of states to challenge the constitutionality of the Affordable Care Act’s protections for those with preexisting conditions — and garnered the backing of the Trump administration. Given the existential threat to the ACA that’s winding its way through the courts, Democrats are framing the Supreme Court nominee as somebody who could help determine the fate of the health care law.

Through their questioning, lawmakers sought to glean more insight regarding Kavanaugh’s views about maintaining these protections. Much like he did on other subjects, he demurred, however.

On his perspective on the Texas v. Azar lawsuit: That’s a pending case, so I cannot talk about it.

On whether he would uphold protections for those with preexisting conditions: It’s a combination of my respect for nominee precedent and my respect for judicial independence. … I can’t give assurances on a specific hypothetical.

On whether he thinks the president could choose not to enforce the ACA: My decisions on the Affordable Care Act have shown respect for the act, respect for Congress, respect for the law, and an understanding of the real-world impact.

Kavanaugh is known for taking a strong stance in defense of gun rights — opining in 2011 that bans on assault weapons are unconstitutional. Democrats asked him to explain the logic he used to arrive at this conclusion.

On his argument that assault weapons are in “common use,” a line of reasoning he used to push back on the constitutionality of an assault weapon ban: This is all about precedent for me. … Semiautomatic rifles are widely possessed in the United States. That seems to fit common use and not being a dangerous and unusual weapon. … The Supreme Court made clear that machine guns can be banned.

The preservation of Roe v. Wade has long been seen as a defining issue in the Supreme Court fight, making it a crucial part of Democrats’ questioning as they seek to scrutinize Kavanaugh. Much like Justices John Roberts and Neil Gorsuch, Kavanaugh recognized Roe as precedent, though this framing doesn’t exactly mean much.

As Minority Leader Chuck Schumer has noted in the past, “settled law is only settled until a majority of the Supreme Court decides it is not.”

I don’t live in a bubble. … I understand the importance of the issue.

On that leaked Roe v. Wade email: The broader point was simply that it was overstating something about legal scholars. … It’s an important precedent of the Supreme Court, it’s been reaffirmed many times.

On working on pro-life policy in the Bush White House: President Bush was a pro-life president, and so his policy was pro-life. And those who worked for him, therefore, had to assist him pursuing those policies. … Some of those things might have crossed my desk.

Kavanaugh sought to distance himself from retired federal appeals judge Alex Kozinski — who faces allegations of sexual harassment and assault from 15 women. Kavanaugh had not only previously clerked for Kozinski, but seemed to consider him an important professional influence. Kozinski was the one who introduced Kavanaugh at his 2006 confirmation hearing, after all. When confronted with the allegations that have been levied against Kozinski, Kavanaugh very quickly downplayed their relationship.

On his knowledge of the alleged misconduct: I was not aware of those allegations until they became public, when there were news reports about them.

On the validity of these allegations: I have no reason not to believe [the women who’ve accused him.]

In addition to his extensive paper trail, Kavanaugh also has a lengthy record of congressional testimony — consisting of two other confirmation hearings he participated in for a DC circuit judgeship, in 2004 and 2006. Democrats are suggesting that documents that been unearthed since indicate he may have misrepresented — and even lied — about some of the topics covered during those panels.

As part of this argument, they’re implying that he did not accurately describe his involvement in helping bolster controversial Bush-era judicial nominees and detainee policy.

On the William Pryor judicial nomination — a controversial anti-abortion pick from whom Kavanaugh has distanced himself, though documents indicate that he was involved in Pryor’s confirmation (Read Vox’s Tara Golshan for more.): I don’t recall specifics. We would have met at meetings. I could have attended a moot court where we did a mock hearing. I don’t remember specifics, but it sounds — that sounds right to me, that Ben would have been the person primarily in charge of that handling it.

Lawmakers were very interested in getting a better sense of Kavanaugh’s perspective on Trump — something he very clearly did not want to talk about. Instead of addressing any of these questions, Kavanaugh dodged and said that he was not able to comment on anything political.

On a recent Trump tweet attacking Attorney General Jeff Sessions and whether presidents have the ability to influence federal agencies: I don’t think we want judges commenting on the latest political controversy because that would ultimately lead people to doubt whether we are independent.

On Trump’s repeated bashing of the federal judiciary: I’m not going to comment on current events.

(As Sen. Richard Blumenthal (D-CT) noted, Gorsuch did weigh in broadly during his confirmation on attacks that Trump levied at the time, comments which included disparaging statements referencing the Mexican heritage of Judge Gonzalo Curiel.)

Special counsel Robert Mueller’s investigation of the Trump campaign and Russia efforts to interfere in the 2016 election has been looming over pretty much everything — and it was no different at Kavanaugh’s hearing. Specifically, Democrats wanted to know more about whether Kavanaugh had participated in meetings related to the Mueller investigation that could pose an additional conflict of interest.

Sen. Kamala Harris (D-CA) asked Kavanaugh if he had met with anyone from a law firm founded by Trump’s personal attorney and Blumenthal took a similar tack by asking him if he had any meetings with a member of the White House.

On meetings with attorneys from Kasowitz Benson Torres, a law firm started by Trump’s personal attorney: (Day 1): I’m not sure if I know everyone who works at that law firm. … I’m not remembering.

(Kavanaugh does have a close friendship with Kasowitz attorney Edward McNally.)

On discussing the Mueller investigation with a member of the White House like Don McGahn: I’m not remembering any discussions like that. Of course, in preparing for this hearing, I’ve prepared for questions like the one you’re asking.

Vox Sentences: A message from Denver’s teachers
2018 primaries: Voters have their say in Colorado, Maryland, Mississippi, New York, Oklahoma, Utah a...
Why Democrats just gave away their best chance at ending the trans military ban
Acting Navy Secretary resigns after calling ousted coronavirus-stricken captain “stupid”
Where every 2020 candidate stands on guns
“Our culture is not up for sale”: The stakes of Trump’s push to drill in the Arctic refuge