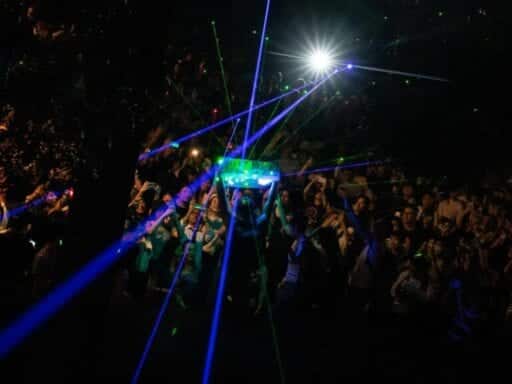 After months of tense protests in Hong Kong, demonstrations took a lighter turn on Wednesday — in the form of a late-night laser show.

Police defended the arrest by arguing that laser pointers are dangerous because they can be used to damage people’s eyes and saying that protesters had used them against police. “During recent operations, you can see many people flashing these kinds of laser pointers at officers,” Chow said. “Some officers have felt unwell, and some were even injured.”

The police even staged a demonstration for the media in which they shined a laser pointer at a sheet of newspaper until it began to smoke in order to prove that lasers could burn through paper.

Needless to say, the protesters weren’t buying it, and accused police of “fabricating a charge in order to arrest innocent persons arbitrarily.”

On Tuesday, they amassed at the Sham Shui Po Police Station to protest Fong’s arrest, surrounding the building and occupying streets. Authorities tried to disperse the crowds with tear gas.

On Wednesday night, they once again took to the streets to call for Fong’s release. But this time, they brought laser pointers — hundreds of them — and staged a massive laser light show that would rival any rave.

Hundreds gathered outside the domed planetarium of the Hong Kong Space Museum to shine their lasers in a show of defiance — and more than a little bit of trolling.

The demonstrators, many smiling, laughing, and snapping photos on their cellphones, “pretended to set the building and trees outside on fire using the lasers,” the Guardian reports. “They chanted ‘fire, fire, not on fire’, as they pointed dozens of laser beams at the outside wall of the building.”

At one point, a demonstrator held up a newspaper and the crowd directed their lasers onto the newsprint, turning the paper into a glowing sheet — but definitely not setting it aflame.

The newspaper also just so happened to be one that has embraced a pro-Beijing stance, making it a powerful statement on the larger issue these Hong Kong protesters have been demonstrating about for months: Beijing’s growing attempts to exert control over Hong Kong.

After police sought to demonstrate during a press conference that the laser pens can burn paper, many tried to burn the trees near Space Museum – nope, didn’t work.
(@demosisto video) pic.twitter.com/MaU8fYqRMD

Major protests began in June over a controversial extradition bill that would have allowed Hong Kong to extradite those accused of crimes to countries and territories that don’t have formal extradition treaties with its government — including mainland China.

Hong Kong is a former British colony, which the British handed back to China in 1997 on the condition that the territory would be allowed to govern itself for the next 50 years under the principle of “one country, two systems.” But that’s been increasingly under threat, as Beijing wants to bring Hong Kong closer into its orbit.

The bill is currently on hold in the wake of massive, sometimes violent protests that have rocked the city and rattled Beijing. But the law hasn’t been formally withdrawn, and critics fear it could easily and swiftly be passed if they let up the pressure.

The laser show is intimately connected to this larger battle over the future of Beijing, but many demonstrators saw it as a reprieve from the tear gas and tensions that have unsettled the city-state in recent weeks.

Protesters made Star Wars memes from the photos filled with green lasers, and the light show turned into a late-night dance party.

Fong was released from custody Thursday morning, in a small but tangible victory for the demonstrators. But the peaceful, ebullient laser show is probably a temporary reprieve from the simmering unrest.

On Monday, a strike brought public transit — including airline flights — to a standstill. That drew some of the toughest language from Beijing, which called the protesters “extremely rampant and deranged.”

On Wednesday, Zhang Xiaoming, a senior Chinese official who runs Hong Kong and Macau Affairs Office of China’s State Council, hinted that Beijing would intervene if the situation continues to escalate. “If the situation worsens further, and there is turmoil that the Hong Kong government is unable to control,” Zhang said, “the central government absolutely will not just watch without doing anything.”

The reporters who broke the Weinstein story have 3 big questions about the #MeToo movement
If the Supreme Court decides the election, it will likely all come down to Brett Kavanaugh
Here’s how to listen to every Vox podcast interview with a 2020 Democratic candidate
House narrowly passes farm bill that contains controversial work requirement for food stamp recipien...
Ronan Farrow, NBC News, and how the network missed the Harvey Weinstein story, explained
America needs to close down