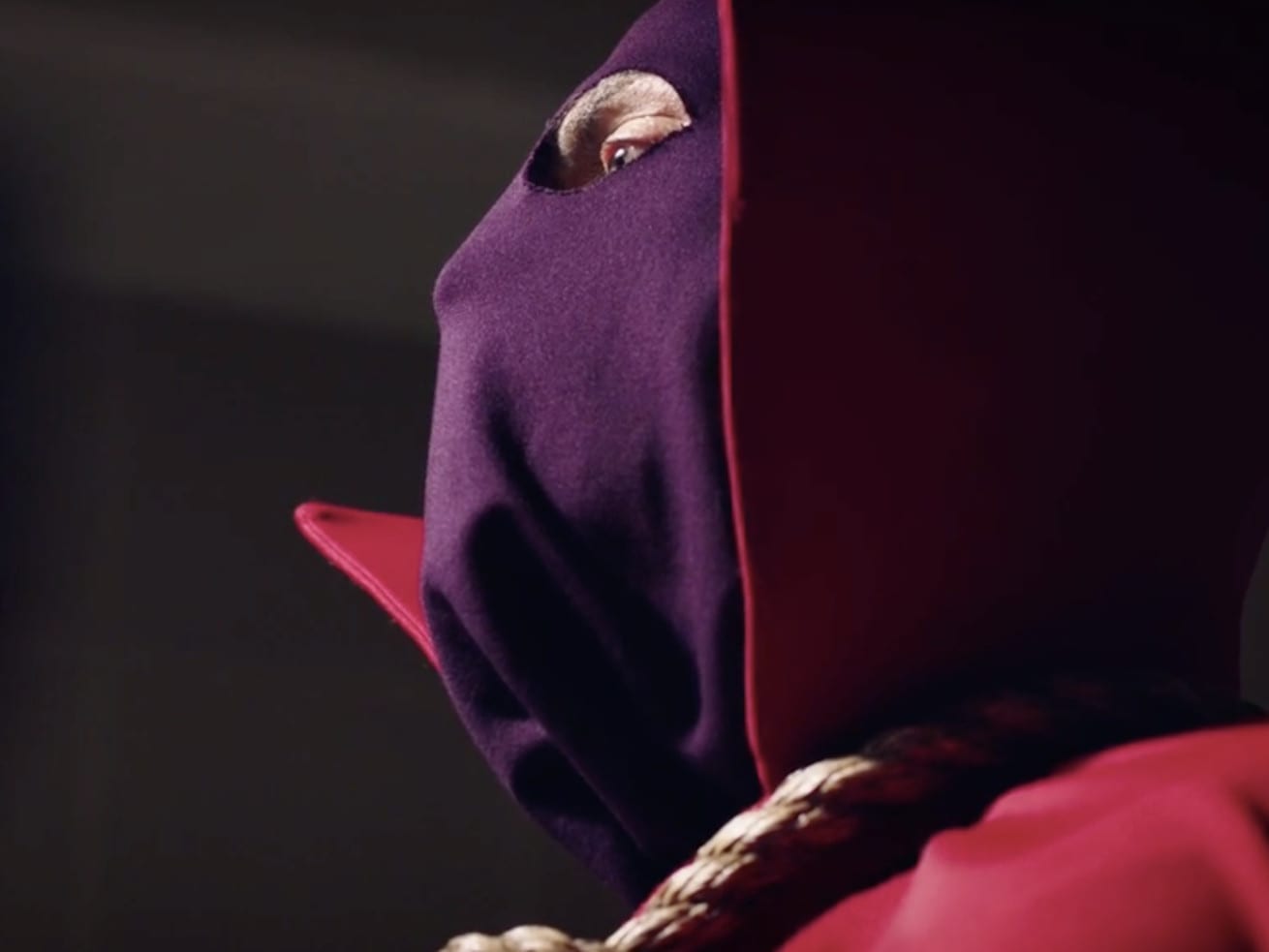 A massive reveal in “This Extraordinary Being” has pushed the entire Watchmen universe forward.

This article contains spoilers for the sixth episode of HBO’s Watchmen.

Watchmen’s sixth episode, “This Extraordinary Being,” is one of the most explosive episodes of television this year, and it’s all wrapped around one nuclear revelation: Will Reeves, a.k.a. Angela’s grandfather, a.k.a. the mysterious man in the wheelchair, is the superhero known as Hooded Justice.

Thanks to a bottle of magic memory pills, Angela goes through the pain, joy, and sorrow of living through her grandfather’s life experiences. This allows her to not only see him don his costume and become Hooded Justice, but also understand that he was unable to have his heroics recognized as such because of the color of his skin. He was allowed to become Hooded Justice, a superhero, but only if he pretended to be white.

This game-changing bombshell changes the trajectory of Watchmen entirely, and it also alters the original, 33-year-old graphic novel. Though he isn’t a main character in Watchmen, Hooded Justice is considered the superhero that started the era of masked and caped crusaders. He’s the reason heroes exist, and his disappearance from the world marked the beginning of the end of costumed vigilantism. Making a black man the focus of that narrative plunges everything we previously knew about the character into deeper, more tragic territory than the initial story offered.

Watchmen was supposed to change the way we think about our heroes, their stories, and their impact on society. With this massive reveal, the television show has valiantly pushed the entire Watchmen universe forward, while still in keeping with the spirit of the original comics themselves.

In the comics, Hooded Justice is a tertiary figure. He appears, in the flesh, in a flashback where he saves Sally Jupiter (Laurie’s mom) from being raped by the Comedian. Later, we find out via Sally’s scrapbook that two characters named “H.J.” and “Nelly” are in a relationship, and that Sally is “covering” for them — presumably as a beard for Hooded Justice and Nelly (who the reader can deduce is probably Nelson Gardner, a.k.a. fellow superhero Captain Metropolis).

Like this tidbit about Hooded Justice’s sexuality, almost everything else we know about the hero comes from secondhand, sometimes even third-hand, accounts of his feats, his follies, and his identity. And those three points are the bones of his story.

Most of the Hooded Justice dossier comes from a supplemental aside in the comic, in the form of fictional excerpts of Hollis Mason’s autobiography Under the Hood. Mason, in the graphic novel, is the hero known as Nite Owl and was part of the premier superhero team known as the Minutemen. These excerpts, ranging from information about the heroes and team composition to Mason’s own musings about vigilanteism, serve as a break in the story and flesh out the world of Watchmen.

Mason explains that Hooded Justice was actually the reason he wanted to be a hero. In the second chapter of the first installment of Mason’s book, he writes of a “simple and un-presupposing” story he once read about a masked avenger in Queens, New York, who stopped a gang from robbing and assaulting a couple.

“At this point, the crime had been interrupted by a figure ‘who dropped into the alleyway from above with something on his face’ and proceeded to disarm the three attackers before beating them with such severity that all three required hospital treatment,” Mason wrote, explaining that the hero was dubbed “Hooded Justice” by local papers. “I knew I had to be the second [masked vigilante]. I found my vocation.”

The other major thing we find out from Mason’s autobiography is that Hooded Justice eventually disappeared. Mason explains that during the McCarthyism era of American politics in the 1950s, masked vigilantes had to appear before the government to be questioned about their allegiances. This is around the time that Hooded Justice disappears, which Mason assumes was because he didn’t want to deal with the government witch hunt.

“Vanishing is no big problem when you’re a costumed hero — you just take your costume off,” Mason writes. “It seemed quite likely that Hooded Justice had simply chosen to retire than reveal his identity which the authorities seemed perfectly happy with.”

In the comic, Hooded Justice was sympathetic to Nazis

From the sound of Mason’s observations, Hooded Justice’s story seems so deceptively simple, an open-and-shut case. But most of what Mason writes doesn’t really answer the most pressing question in light of the show: Was Hooded Justice actually intended to be a black hero in the original comic?

There is one passage where it seems like that’s a definitive “no.” In the third chapter of Under The Hood, Mason explains the background of each of the heroes who eventually became the Minutemen. One of his anecdotes revolves around the political bearings of the Minutemen, and he hints that Hooded Justice was a fascist with Nazi sympathies.

“Before Pearl Harbor, I heard Hooded Justice openly expressing approval for activities of Hitler’s Third Reich, and Captain Metropolis has gone on record as making statements about black and Hispanic Americans that have been viewed as both racially prejudiced and inflammatory, charges that it is difficult to argue or deny,” Mason writes.

In this context, those noose around Hooded Justice’s neck and KKK-style hood he wears become terrifying symbols of white power. But this horror lines up with the story writer Alan Moore wanted to get across. Watchmen isn’t supposed to be about hero worship, Moore argued, but rather the dangers of it and of abdicating personal responsibility to said heroes. He wanted to show how imperfect they are, how monstrous they can be, and what happens when you mix the power they have and how they change what “justice” looks like.

Hooded Justice’s fellow hero, Rorschach, is a nihilistic, unapologetic, objectivist moralist who is willing to risk armageddon based on what he believes is good. Ozymandias is a genius utilitarian who sees no problem in killing millions of people to achieve harmony. Hooded Justice, as the first hero but also a fascist with a racist, gay lover (who’s also a masked vigilante), seems like the type of flawed, monstrous hero whose story Moore and Gibbons wanted to tell.

Now, jump ahead to episode six of the HBO follow-up. Watchmen showrunner Damon Lindelof and episode co-writer Cord Jefferson’s decision to make Will Hooded Justice makes for a more sorrowful story. The events of this episode completely change the novel while still honoring the spirit of the original text: flawed heroes in a flawed society.

In the context of the TV show’s revelation of Hooded Justice’s race, Mason’s observations cut in different ways. Mason’s theory that Hooded Justice retired because he didn’t want his secret identity to be found can now be read as incredibly reductive, or missing the real point of why Hooded Justice would want to go into hiding.

Hooded Justice’s disappearance now more easily seems to be the result of Will not wanting people to find out his race, as he knows that society wouldn’t be able to handle the idea of a black superhero. White mobs destroyed Tulsa, which housed a thriving black community. They would certainly go after a black hero even more aggressively.

Hanging up his mask and costume wasn’t as easy for the HBO show’s take on Hooded Justice as Mason makes it sound in the comic. When Will stops being Hooded Justice, he returns to his place in reality as a black man in a society that doesn’t value, doesn’t trust, and inflicts violence upon black people.

Will’s race and its impact on his societal stature also make the viewer question the narratives we write about our heroes. Hooded Justice’s legacy now completely changes with the revelation of his race, depending on who wrote his story and the prejudices they have; the writers who tell the stories of these heroes come are informed by whatever biases they may hold. Considering Hooded Justice’s Nazi sympathies and Captain Metropolis’s racism, it’s hard to believe that Hooded Justice’s legacy would remain perfectly intact if the hero revealed himself to be a black man.

You could try arguing that Hooded Justice used that kind of language to throw people off his trail, or that Mason was an unreliable narrator and left out the character’s race. But that seems more complicated than just concluding that the show took liberties in interpreting the character’s backstory.

Hooded Justice, on TV, comes across as relatively valiant. He wants to save the world, and do good, but his fellow heroes won’t help him. He actually finds and dismantles the hypno-technology that the KKK is using. And even though we don’t know why he killed Police Chief Judd Crawford, it feels like there’s a good reason behind it given what we know about will.

That said, Hooded Justice’s history and his secrets are now part of his granddaughter Angela’s story.

Will’s legacy as Hooded Justice has been crystallized, preserved, and will live on long after him. It’s now Angela’s turn to reconcile her grandfather’s experiences with her own identity and her own sense of heroism. But despite the reparations, despite the decades between them, her situation — a black cop donning a mask to become a “hero” — feels so very close to his. His memories serve as a warning to her about human nature and the world they live in. Saving Angela from repeating his own mistakes very well could be Hooded Justice’s last heroic act.

Poll: Americans are afraid of ending the coronavirus lockdowns too soon
A Republican judge just tore into Trump’s election lawyers for their incompetence
Live results for the Connecticut primary elections
Talking to kids about coronavirus
The new Michael Flynn documents aren’t the bombshell Trump is making them out to be
Ben Shapiro’s revealing explanation for Donald Trump’s rise: it’s all Obama’s fault