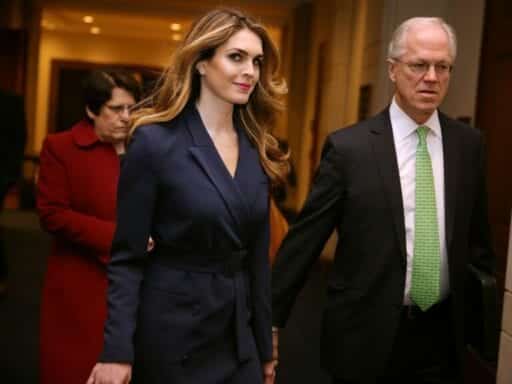 She’s the first of Trump’s inner orbit to sit down for an interview with the Democratic-led panel.

Hope Hicks, the former White House communications director, will soon become the latest Trump official to testify in front of Congress amid the president’s push to block lawmakers’ investigations into his campaign and presidency.

Hicks, who worked on the Trump campaign in 2016 and left the White House in March, is set to testify in front of the House Judiciary Committee as part of a closed-door session next Wednesday focusing on the Mueller report and the panel’s investigation of Trump’s potential efforts to obstruct justice. The committee said it intends to make a transcript of the conversation “promptly available to the public” after its interview with Hicks takes place.

Hicks was a top aide to Trump and is seen as an important witness who can provide context to the Mueller report. She will be the first member of the president’s inner orbit to appear in front of Democratic-led committee as they continue to scrutinize the president, and is one of the first to comply with the panel’s demands for testimony. Donald Trump Jr., one of the president’s sons, recently appeared in front of the Senate Intelligence Committee to address questions related to the 2016 campaign and Russian interference.

The White House has made a big show of blocking congressional inquiries, directing top aides including former counsel Don McGahn to ignore subpoenas issued by the House Judiciary Committee. It’s also urged Hicks and former deputy counsel Annie Donaldson to abstain from sharing documents related to their time in the administration. It remains unclear just how much of Hicks’s testimony the Trump administration will try to block using executive privilege. In response to the administration’s efforts to hinder committee investigations, the House on Tuesday voted to give lawmakers the ability to sue Trump officials who do not comply with subpoenas.

The interview next week is set to focus on a wide-ranging set of subjects related to Hicks’s work during and after the 2016 campaign.

“Ms. Hicks understands that the committee will be free to pose questions as it sees fit, including about her time on the Trump campaign and her time in the White House,” House Judiciary Chair Jerry Nadler said in a statement. “Should there be a privilege or other objection regarding any question, we will attempt to resolve any disagreement while reserving our right to take any and all measures in response to unfounded privilege assertions.”

Nadler has signaled that he expects Hicks’s testimony to be one in a series the committee will ultimately obtain from key Trump officials.