How a Chinese immigrant neighborhood is struggling amid coronavirus-related xenophobia 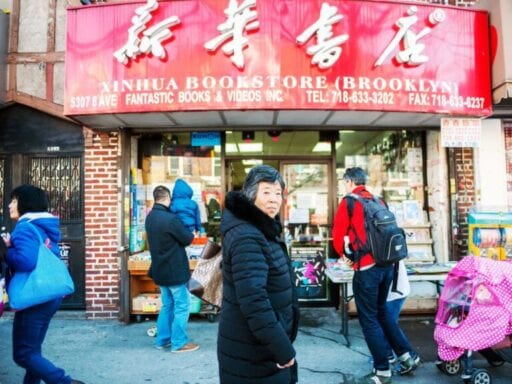 The Eighth Avenue subway station in Brooklyn’s Sunset Park is emptier than usual. Walking in the neighborhood that’s home to 74,600 immigrants, the once-familiar view of people crowding the sidewalks, carrying red plastic bags from Chinese grocery stores, is no more. Pedestrians have dwindled to small numbers. Almost everyone is wearing a protective medical face mask. Street vendors, selling fresh fruits and vegetables, compete with one another, eager for customers. Employees in small shops look out in the streets, anxiously waiting for someone to walk in.

Sunset Park, in southwest Brooklyn, houses New York City’s largest Chinese community. After being crowded out of Manhattan’s Chinatown more than two decades ago, Chinese immigrants have settled and built their lives here. People from all over the city flock to the vibrant district to buy fresh meat and vegetables, shop in mom-and-pop stores, and eat at beloved dim sum restaurants.

But all that has changed in the past few months, as the novel coronavirus outbreak has caused global anxiety. Since the first cases were reported in Wuhan, China, late last year, Chinese communities and Asians across the world have been the target of a sudden rise in anti-Asian racism and xenophobia. There have been innumerable reports of physical and verbal attacks against Asians as well as misinformation and harmful imagery online that play into stereotypes. The xenophobia — compounded with general fears of Covid-19, the disease caused by the virus — has taken a great toll on the livelihoods of Chinese immigrants and workers, especially those in smaller communities.

“It’s a reminder of how quick people try to herald us as model minorities but also how quickly they will remind us where we are,” Whitney Hu, a local organizer who recently announced her run for city council, told Vox. “You come to a place like New York City, and you assume you’re free from all the bullying because it’s multicultural, but then you realize that the solidarity isn’t there and how quickly people isolate themselves when a crisis like this comes up.”

Just this week, many of Sunset Park’s famous dim sum restaurants decided to temporarily close down, as the number of customers and profits dropped drastically. Pacificana, one of the only large dim sum halls that’s still running in the area, remains hopeful that business will pick back up. In the meantime, it’s been cutting staff and possibly business hours. March is usually a busy month for the restaurant, especially for weddings, but because of the virus, people have canceled events, leaving them with only one wedding at the end of the month.

“Lunch is usually very busy and packed,” one Pacificana employee told Vox, “But as you can see,” gesturing into a large and empty dining hall, “No one is here. I feel like we lost about 90 percent, or maybe more, of our customers.”

Because businesses are taking a financial hit, Hu and a group of people have decided to organize Chinatown food crawls to support Chinese restaurants. The group initially started in Manhattan’s Chinatown; then, a few weeks ago, Hu invited them over to Sunset Park to eat at Pacificana. What struck her the most was how quickly they got a table for a group of 30 people with no reservations on a Friday night.

“Sunset Park, on Eighth Avenue, I’ve noticed, has become quieter. Less people are out,” said Hu. “I do think I see the same neighbors and shop owners out and about, but I don’t see the visitors or tourists who would often come and visit.”

Early this month, New York City Chinatown officials held a press conference addressing the rise in “xenophobic hysteria” against Asians, as more discriminatory acts were being reported. In a viral video, a man on the subway yelled at an Asian man to move somewhere else, then sprayed him with Febreze.

But it’s not just New York City — anti-Asian xenophobia and racism have become a bigger issue around the world as a result of Covid-19. As Nylah Burton reported for Vox, in major cities like Los Angeles, Seattle, and Toronto, East Asians have been targeted — from racist comments made by TSA agents to verbal street harassment. Meanwhile, Chinese restaurants across the globe say they are struggling for business because of widespread misconceptions about the “cleanliness” of their food.

“We have not yet even confirmed a case of the coronavirus in our communities,” Assembly member Yuh-Line Niou said at the New York Chinatown press conference. “We are undergoing this kind of treatment even though every single one of our restaurants, our businesses, have the same safety inspections, commercial standards, and health codes as anyone. But people continue to spread messages, urging others to avoid Asian American restaurants or businesses.”

Restaurants and grocers aren’t the only places being less frequented. The Academy of Medical and Public Health Services (AMPHS), a nonprofit health service organization that helps underserved immigrant communities with primary care and social assistance in Sunset Park, has also seen a drop in visitor and attendance numbers. AMPHS offers free health services such as consultations and physical therapy, regardless of documentation status or insurance. It also has an education program, where it offers literacy and language courses catered to immigrant communities who can’t understand or speak English.

“Usually, our classes are full,” said Mon Yuck Yu, the executive vice president and chief of staff for AMPHS. “We typically have about 15 to 20 students going to class, but since the coronavirus broke out, we have seen a decrease in our numbers. We even had a class where only one student showed up.”

AMPHS also works with a senior center that’s typically roaring with Chinese seniors playing mahjong and socializing. Most days, they also come for free meals. But the center has since been deserted as the outbreak has escalated. Older Chinese people are now self-quarantining at home for protection, Yu said (the CDC has advised anyone over 60 to “stay close to home”). Many are also refusing to use public transit to avoid not only the possibility of getting the virus but also potential racist attacks.

The difference is drastic traveling from Manhattan to Sunset Park, where people wearing face masks begin to emerge as the N train nears the Eighth Avenue station. While in some countries wearing a face mask is a cultural tradition, here in the US, face masks have come to be a symbol of fear and anxiety. And for immigrant communities like those in Sunset Park, masks have taken on an extra meaning.

“Right now, the reason people wear face masks is because they want to be proactively doing something to prevent the disease knowing that we can’t get a vaccination,” said Yu. “But many community members have started to associate wearing face masks with xenophobia, so they avoid doing so [when they leave Sunset Park], because they don’t want to be attacked or discriminated against.”

Even before the coronavirus outbreak, the area’s residents had already been on edge, battling fears of the heightened raids by US Immigration and Customs Enforcement agents. Just last year, ICE agents attempted several raids in the neighborhood, prompting residents to stay indoors.

“A part of me is worried that the suppression tactics used by the federal government, such as ICE raids, are also going to impact people seeking help if they are showing symptoms of something more serious,” said Hu. “For us in Sunset Park, there’s a lot of diligence and making sure that we know who to trust and what service providers are doing and where we can seek help.”

Meanwhile, Yu said that AMPHS is working hard to send important information to communities that are hard to reach, which include undocumented individuals, new immigrants, and those who can’t speak or comprehend English. The organization is launching initiatives to find these individuals, primarily by sending messages on social platforms they frequently use — like WeChat — so they can constantly receive new and important information. AMPHS also plans to post flyers and posters across the neighborhood informing community members how to best prepare for the crisis and whom to reach out to.

With all the social distancing and people working from home, the group visiting Chinese-owned restaurants plans to have a virtual meeting on Sunday to figure out next steps. For now, Hu wants to get vital information translated into Chinese, as the city announced its plans to offer emergency loans with no interest to small businesses.

In the meantime, worries are amplifying, and optimism is fading in the community. The evening after I visited Pacificana, Hu and a group planned to have dinner there again, but they found the doors were locked when they arrived at 7 pm, even though the restaurant closes at 11. Eighth Avenue, she noticed, was also oddly quiet and empty.

“The future is going to be painful,” Hu said. “I know we’re going to see the long-term economic impacts of what that looks like, whether that’s some of our favorite restaurants not opening back up” or other effects. “It’s going to be a big economic hit.”

Rachel Ramirez is a reporter covering environmental justice, science, and business. She was born and raised in the Northern Mariana Islands, a US territory in the Pacific Ocean. Her work has appeared in Grist, the Financial Times, Rolling Stone, HuffPost, and other publications. Find her on Twitter @rachjuramirez.

10 ways to accelerate progress against climate change
Vox Sentences: The pope wants whistleblowers on sex abuse
Choose your quarantine meme house
HBO Max wants to be the next cable bundle instead of the next Netflix
Protesting during a pandemic is a risk. Many have decided it’s worth it.
The real cost of smart speakers