How Congress could force Trump to use the Defense Production Act 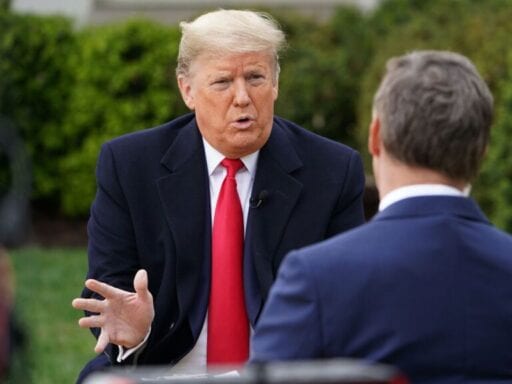 Democrats are pushing bills that could force the president’s hand — but Republicans would still have to get on board.

President Donald Trump could require private companies to prioritize the production of supplies that medical workers are pleading for the federal government to provide, including face masks, ventilators, and gloves — but he hasn’t. Democrats in Congress are now trying to force his hand.

Democrats have introduced multiple bills that would require Trump to fully use his powers under the Defense Production Act (DPA), which was first enacted in 1950. Trump invoked the law last week, but hasn’t leveraged a key provision which would require private companies to complete orders from the federal government before others, baffling governors who hoped that production of key supplies would accelerate. (Trump has used the law, however, to issue executive orders, including one that bars people from hoarding health care supplies.)

Vox’s Alex Ward reports that some of Trump’s reluctance stems from his fears of being held responsible if something goes wrong, according to a senior administration official. Trump has said publicly he’s worried it’ll look too much like socialism.

Senate Democrats are now pushing legislation that would compel the president to capitalize on the authority of the DPA: As written, the existing law says the president “may” use the power that it grants, and the new language in Democrats’ bills says that he “shall,” in order to specifically increase the production of medical supplies. They aren’t amending the DPA, so much as directing the president to use the law explicitly for this particular purpose.

If their 47-member caucus stuck together, Democrats would need to get at least 13 Republicans on board to actually pass this legislation, and picking up that support is likely to be the biggest obstacle they face. Were they able to, though, the DPA could do a lot more to help both desperate health care providers and patients.

Democratic bills are putting pressure on the Trump administration

Two bills from Senate Democrats would force Trump to use the full power of the DPA to order and distribute medical supplies if they were ultimately enacted.

Sen. Tammy Baldwin (D-WI)’s legislation would require Trump to prioritize an order of 300 million N95 face masks, 24 hours after it goes into effect. It would also call on FEMA to submit a report about the medical supply needs across the country, no more than one week after the bill has been passed, so there’s comprehensive data about exactly what’s needed.

Both bills would require Trump to use the DPA authority. If passed, they would have the legally binding authority to compel Trump to act, though the president would be able to challenge this requirement in court. Their additional provisions differ slightly, however.

Baldwin’s, for example, requires FEMA, and the Department of Health and Human Services, to produce a comprehensive review of the key shortages the country is facing when it comes to medical equipment. Murphy and Schatz’s bill, meanwhile, calls on the president to play a more active role in coordinating the distribution of supplies and equipment across states, to ensure that they don’t have to compete against each other for these materials as many are struggling to do now. Theirs would also call on the president to play a role in ensuring supply pricing is “fair and reasonable.”

“The current system, in which states and hospitals are competing against each other for scarce equipment, is both unnecessary and barbaric,” Murphy said in a statement. “It’s time to centralize the critical medical supply chain and distribution during this public health crisis.”

No Republicans have signed onto either of these bills yet, but GOP lawmakers have also put pressure on Trump to take full advantage of the DPA. Sen. Ted Cruz (R-TX), in a letter to Health and Human Services Secretary Alex Azar, pressed the point last Friday. Sen. Marco Rubio (R-FL), too, has expressed his support for using full DPA authorities.

“I urge you to exercise these delegated powers to the fullest extent necessary to ensure that health care facilities across the country have the ventilators they need to treat all patients who become critically ill with this virus,” Cruz previously wrote.

The main reason activating the DPA now is so vital is the massive shortage of everything, from tests to face masks to ventilators, that states are experiencing.

Doctors across the country have sounded the alarm about the dearth of protective equipment and other resources. Some have been asked to make their own face shields, while others have been pushed to re-use the same face masks over and over. “We are at war with no ammo,” a California surgeon told the New York Times.

“Even with the infusion of supplies from the strategic stockpile and other federal resources, there will not be enough medical supplies, including ventilators, to respond to the projected COVID-19 outbreak,” a letter from the organizations, which was sent last week, reads. “We have heard of health care providers reusing masks or resorting to makeshift alternatives for masks.”

As Ward has previously written, the power of the DPA isn’t just that it allows the president to ask companies to prioritize federal government orders, it would also enable coordination of materials — so supplies like fabric, for example, could be redirected to medical needs for the time being over other products.

Ultimately, it’s only one tool that the administration has to provide the resources that states, physicians, and patients sorely need. Given the severity of the current crisis, it’s one that seriously matters.