How El Camino captures what Breaking Bad did best 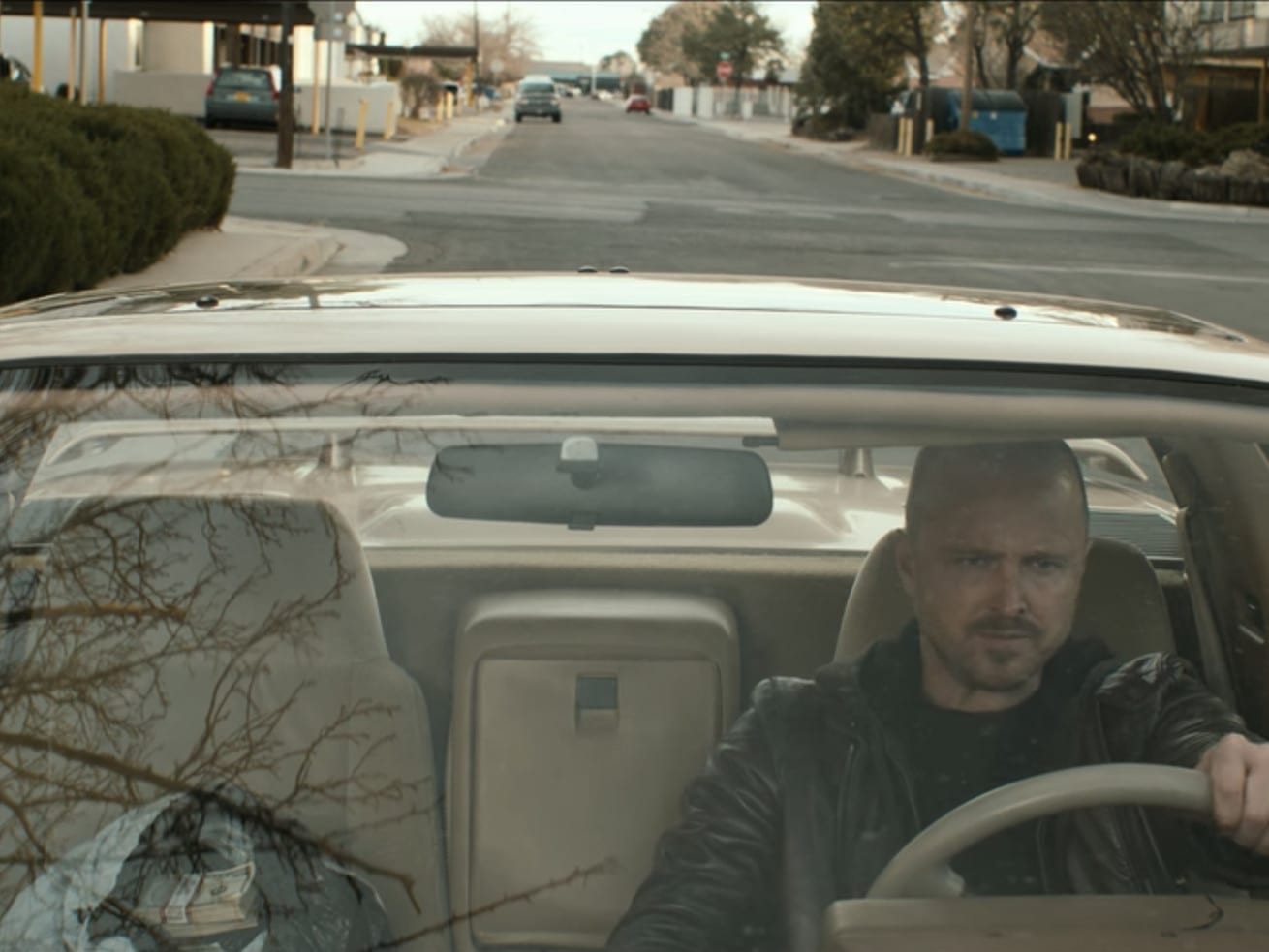 Breaking Bad was as funny and heartfelt as it was dark. El Camino: A Breaking Bad Movie is, too.

Of all the shows I watch for comfort, Breaking Bad is the one most likely to raise eyebrows. I get it: The tragic saga of one drug dealer’s doomed quest for power isn’t uplifting stuff. But “comforting” doesn’t have to equal “heartwarming” or “light.” Breaking Bad is neither of those things; what it is instead — and I mean this in the best possible way — is so well-engineered as to feel almost formulaic.

That’s not at all a knock on Vince Gilligan’s five-season masterpiece. Breaking Bad is hardly predictable; its turns are thoroughly shocking to those who’ve never seen it. But whenever I rewatch an episode of Breaking Bad, I know what to expect: to feel my sadness or relief or pain for the characters so intensely; to be viscerally entangled in its tension; and to find comic relief in the quirky moments and sarcastic characters who break through with a joke to remind us that, hey, this show isn’t all bleak. Every episode of Breaking Bad combines these elements to create an endlessly entertaining result.

Now, El Camino: A Breaking Bad Movie, offers the same kind of comforts, and in the same way. The two-hour epilogue feels like a four-episode miniseries extension of the original series, just with all four episodes strung together. And the hallmarks of the series’ greatest episodes are all present, a reminder of how magical the TV show could be.

El Camino is by no means essential, however; it largely centers on what happened to Walt’s long-suffering ex-partner Jesse Pinkman (Aaron Paul) after the events of the series finale, and as my colleague Alissa Wilkinson explained in her review, “the fun comes from seeing your favorite characters again, not finally resolving missing pieces that have tortured your sleep for six years.”

But there’s always a risk, whenever a beloved, long-gone TV series is resurrected through this type of continuation project, that it will lean too far into fan service and lose sight of what made the original so good in the first place. Thankfully, El Camino preserves Breaking Bad’s legacy, rather than tainting it. Here’s how.

Just like the original series, El Camino keeps ratcheting up the tension

Breaking Bad could be unbearably tense. Walt and Jesse and everyone they loved were frequently in grave danger. The probability that they would emerge unscathed from some shootout or murder plot by one drug lord or another always seemed so, so low.

But after suffering so much torture at the hands of sociopathic neo-Nazis, Jesse ended the series by escaping his hellish life under the thumb of Big Meth, driving away with a shout of liberation. And that’s where El Camino begins.

The movie’s story goes both forward and backward; the present-tense action takes place immediately after the finale to show us where Jesse’s life goes after he hits the road, while flashbacks fill in the gaps of Jesse’s time in captivity during the back half of the final season.

The present-tense moments are the most gripping, naturally — we know that Jesse got away from his neo-Nazi kidnappers, but there’s no promise he’ll evade jail now that he’s on the run from the cops. And Jesse’s constant struggle to remain a step ahead of the search party that wants to arrest him drives most of the tension in El Camino’s second half.

One sweat-inducing face-off is between Jesse and what he thinks is a pair of cops who have cornered him in the crawlspace of a house he’s broken into, looking for the lifetime savings of Todd (Jesse Plemons), the youngest member of the neo-Nazi family that held Jesse hostage and forced him to cook Walt’s famed meth. The setup is so classically Breaking Bad: Jesse is inches away from being caught. Escape seems impossible. How the hell will he get out of this one?

The stakes are painfully high, but that’s what makes the scene so fun to watch. At first, we only know that Jesse is hiding somewhere in this house as the cops search for any hint of him having ever been there. We don’t know where he is or if they’ll find him. And then, suddenly, one cop peeks into a crawlspace: There’s Jesse, staring both the cop and viewers right in the face. But Jesse is armed, and cooly demands that the cop lay down his gun.

El Camino is all about escalation: The cop’s partner comes into the room, at Jesse’s behest, so that Jesse can try to cut a deal with them to get away. It seems like it could work; they seem willing to negotiate. But can Jesse really convince the law to let him escape? Or is Jesse going to have to kill these guys to get free?

The answer is neither, as Jesse IDs these guys as fakers, petty criminals chasing down the same money he is from Todd’s house; they had bought cop costumes and dressed up to cover their own break-in. It’s unexpected stuff that ends with both a deep breath of relief and an extra bolt of exciting, “oh my god” energy.

Breaking Bad was always just as emotionally resonant as it was powerfully tense. Jesse is its most tragic victim, the lackadaisical teen who becomes a deeply wounded, grieving adult under Walt’s watch. El Camino fills in some of what we didn’t see on Breaking Bad and learning what Jesse was exposed to when he was forced to pal around with Todd is devastating. Todd was tasked as Jesse’s keeper during the final season five, when the neo-Nazis held him hostage to make him cook for them, and El Camino contains flashback scenes to that relationship.

In one of them, Jesse stumbles into Todd’s disturbingly kitschy kitchen and sees something just out of frame. The camera pans down, and … it’s the rigor mortis-set body of a woman with a belt around her neck. Which Todd has left lying on the floor for who knows how long. And which Todd makes Jesse help him dispose of.

Jesse goes through the motions as if he’s comatose, and seeing him so stricken by this senseless death that he had nothing to do with is gutting. When he and Todd go to bury this woman — Todd’s housecleaner, whom Todd refers to “a nice, nice lady” who “didn’t deserve” to be killed by him — Jesse breaks down sobbing. I cried, too; he may be on the run from the fuzz for selling meth, and he may have deaths on his conscience. But Jesse Pinkman is still doing the best he can to be a good person.

These kinds of scenes draw strong through-lines to Breaking Bad’s original run. At the start of the series, when Jesse was much younger, we saw him experience first love and first heartbreak in uniquely painful ways. Losing Jane (Krysten Ritter) in particular to an overdose at the end of season two continues to echo here; Jane even shows up as an apparition to Jesse at one point. El Camino is a stark reminder that Breaking Bad was constantly full of emotional moments, which usually revolved around Jesse. The tears I have shed for this boy!

But amid the drama, there is still some very dark humor

This is all some heavy stuff. But Breaking Bad should be remembered for its comedy as much as its drama. It’s difficult to wring laughs out of a heart-pounding police showdown or the gruesome death of an undeserving woman, but there are other moments in El Camino where Gilligan winks at the absurd heights his work can reach.

In El Camino, Jesse pleads with Ed the Extractor (Robert Forster, who died on Friday, not long after the film debuted on Netflix, making it one of his final roles), also known as the infamous Disappearer. He’s begging Ed to help him finally ditch his life and start anew, but Ed doesn’t want to get involved. A wrenching tug-of-war ensues as Jesse counts out the cash he has to offer and falls just $1,800 short of Ed’s price tag. When Jesse won’t leave Ed’s vacuum shop — a cover business — Ed deals the harshest hand possible: He picks up the phone, calls the cops, and then hangs up to wait until they arrive.

Jesse is terrified and ready to run for the hills. But then he makes a heel turn and drops the mic: Ed didn’t make a real phone call, he argues. Because if Ed did call the cops, they would have made sure he stayed on the phone with them in the meantime. And he wouldn’t be so stupid as to give himself up, too — why would a guy like Jesse with a bag full of cash be trying to hand it over to a random vacuum seller? Jesse sounds so proud and sly and smart during this exchange that it feels like his biggest win yet, a fist-pumping moment.

Cut to a bunch of legitimate police cars rolling up out front, a mere two minutes after Ed called for them. This is obviously bad news for Jesse, who dashes out immediately. And yet it’s good news for the viewer that the Breaking Bad universe still has very dark laughs in it too, no matter how bad things get — it’s never just tension and never just tears.

Breaking Bad’s pilot started with Walt’s pants flapping in the wind, as he stood with a gun in his tighty-whities. Walt once threw a pizza onto his ex-wife’s roof! Jesse called everyone “bitch”! Breaking Bad was a riot — and El Camino smartly upholds that tradition.

Even if El Camino offers a conclusion to Jesse Pinkman’s story that feels more like a fun coda than a materially important addition to Breaking Bad, it pulls off what many follow-ups to beloved shows fail to do: a worthwhile experience that recaptures what made the original show so good. It won’t be a stain on Breaking Bad’s otherwise strong legacy; El Camino is a welcome, one-time throwback. And I find comfort in that.

In Sharp Objects’ “Closer,” women’s stories don’t belong to them
Officer who shot Antwon Rose is accused of past civil rights violations
The Democratic National Convention has been postponed until August 17
6 ballot measures that could change the criminal justice system
The pandemic is raising concerns about how teens use technology. But there’s still a lot we don’t kn...
Why Sorry to Bother You director Boots Riley thinks artists should be activists