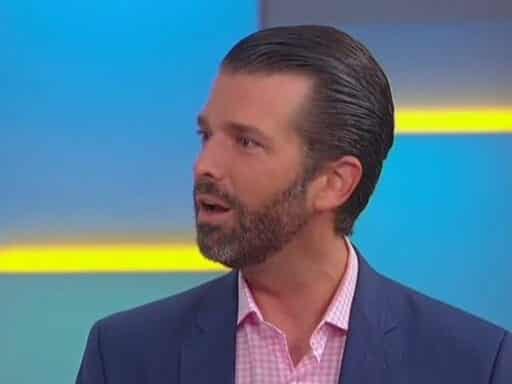 It’s not a matter of opinion, but Fox News treats it as such.

During a Friday morning interview on Fox & Friends, Donald Trump Jr. was asked if the Trump family is profiting off his office. He responded by lying.

The question really isn’t a matter of opinion. The fact of the matter is that following Donald Trump’s precedent-breaking decision not to divest from his business interests, the Trump family is financially benefitting from his office — not necessarily intentionally, but benefitting nevertheless. Trump has claimed he loses “billions of dollars” as president, but there’s no evidence that’s true. Meanwhile, Trump’s most recent financial disclosures reveal the Trump International Hotel alone made him nearly $41 million alone last year.

“Are you guys benefitting financially from the president holding office?” host Brian Kilmeade asked him.

Trump Jr.’s claim about how the Trump Organization has “stopped doing any international deals” is dubious — recent reports indicate they’ve actually been working on an “aggressive global expansion.” But facing no pushback from hosts, Trump Jr. went on to downplay the significance of people spending money at the president’s hotels, echoing a talking point his father used in response to a similar question earlier this week.

“They talk, ‘someone bought a cheeseburger at the Trump hotel!’ It’s asinine,” Trump Jr. said.

Donald Trump Jr dismisses the reality that his family is profiting off his father’s presidency because “we voluntarily stopped doing any international deals.” (Not only does this neglect domestic deals, but it’s a lie: https://t.co/ZBANFuDGlS) pic.twitter.com/aIseV0KRZN

Fox & Friends’ interview with Trump Jr. came while multiple stories about the president profiting off his office are swirling in the news cycle.

During a recent diplomatic trip, Vice President Mike Pence and his entourage went far out of their way to stay at one of the president’s resorts during a diplomatic trip to Ireland. The Air Force has increasingly been stopping at an airport in Scotland close to another Trump property for refueling stops, with personnel then staying overnight at a nearby Trump property.

Attorney General William Barr was recently in the news for spending $30,000 on a holiday party at the Trump International Hotel. And on Thursday night, Pence and Secretary of State Mike Pompeo spoke at an event at the hotel organized by one of the president’s paying customers. (Pompeo pretended to not know who owns the hotel during remarks he made during another event at the hotel on Friday.)

And here he is—

Vice president Mike Pence just took the stage at the president’s D.C. hotel.@realDonaldTrump still owns the hotel and can profit from people paying to hear his VP.

But instead of pushing back by mentioning any of those stories to Trump Jr., Fox & Friends’ Kilmeade instead asked Trump Jr. if he’s “going to continue” the “Trump dynasty” after his father leaves office.

So it goes on Fox & Friends, which has already proven willing to defend the president’s most egregious corruption. Last month, for instance, hosts defended Trump’s push to hold next year’s G7 at Trump Doral, a struggling golf resort in Florida he still owns and profits from, with Kilmeade going as far as to insist that Trump would’ve wanted to hold the even at Doral “whether he owned it or not.”

Trump Jr.’s interview came on the same day as news that a federal judge has revived a case seeking to hold the president accountable for yet another conflict of interest related to his business — foreign governments currying favor with him by spending money at his hotel. Federal judges in the Second Circuit overturned a lower court’s decision to throw out a lawsuit related to the Constitution’s “emoluments clause,” which prohibits the president from accepting gifts from foreign governments.

The Washington Post reports that the 2nd Circuit’s ruling sets the stage for plaintiffs “to seek detailed records on Trump’s transactions with foreign officials.” But even if the emoluments case winds up in the Supreme Court, there’s reason to doubt that the highest court — one in which conservatives hold a majority, in part thanks to Trump’s two appointments to it — would hold Trump accountable. (Trump’s defense is being handled by the Justice Department, which is led by Barr — himself a paying customer of the president.)

In a statement sent to Vox, Citizens for Responsibility and Ethics in Washington (CREW) communications director Jordan Libowitz cited both Trump Jr.’s recent travels and developments in the emoluments case as evidence of just how absurd his claim on Fox & Friends was.

“A month ago today, Don Jr. was in Indonesia for a pre-launch event of the Trump brand’s newest international projects alongside foreign government officials,” Libowitz wrote. “So far in the Trump presidency, 111 officials from 65 foreign governments have made 137 visits to a Trump property, raising the question of how much foreign money has been spent at Trump’s properties. As for where the emoluments suits have gone, he may want to check the news.”