How much will Democrats tinker with their rules this year? 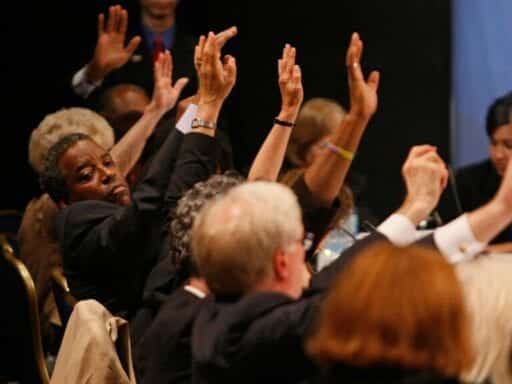 The Democratic National Committee is convening in a few weeks to hammer out its rules for the next presidential election cycle. Their rules are likely to include some controversial changes, including a change in the role and power of superdelegates. But just how much change can we expect from the party this year?

The extent and causes of party change following an election loss is something I’ve been wrestling with in my book project. One way to measure a party’s internal changes is to compare its written rules from one cycle to the next. With the help of Josh Putnam and researchers at the Library of Congress, I’ve been able to collect the DNC’s Delegate Selection Rules for each election cycle since 1956. These are the rules that describe, among other things, who may serve as a convention delegate, and how they get to be one, and what their responsibilities are.

These rules are important; when the Democratic Party wants to change the sorts of candidates it nominates and the decisions it makes, this is often where it focuses its efforts. (This is not the only type of reform a party can make, of course, as Phil Klinkner noted in his important book The Losing Parties.)

With an assist from Mary Kroeger, I’ve been able to compare these rules from one cycle to the next using a cosine similarity analysis. Basically, this approach examines the relative frequencies of words in different documents and calculates the similarity of one text to another. I then subtracted this figure from 100 to calculate the extent of change from one year to the next. So, for example, the rules created after 1956 had an 86.8 percent similarity with those created after 1952, meaning that the rules had changed by 13.2 percent.

The chart below shows the extent of party change in DNC delegate selection rules following each presidential election since 1956 that the Democrats lost.

Unsurprisingly, the post-1968 cycle saw a considerable amount of change in the rules. This is when the DNC, following a divisive nomination, a catastrophic convention, and a narrow loss to Richard Nixon, convened what came to be known as the McGovern-Fraser Commission, which dramatically changed representational rules for delegates. Those rules came to construct the modern system of primaries and caucuses.

Somewhat surprising is the extent of reform following 1988. These changes included allowing California’s massive primary to move from June to March, clarifications for proportional voting, and empowering the Rules and Bylaws Committee to review state delegate selection plans. For the bulk of delegates and candidates, this didn’t involve much change, but the resulting language was a considerable departure from the past, and thus the extent of change appears rather large here. (Thanks to Putnam for some clarification on this.)

So what explains the variation here? Parties are always trying to learn from the last election to see if they need to make changes for the next one. Why do some years see more change in party rules than others?

A low primary vote share suggests a legitimacy problem for the party’s nominee; in particularly divisive contests, many in the party think the nomination was improperly decided

Interestingly, it has little to do with how they did in the last general election. Yes, when the party’s nominee only lost marginally, as it did in 2000 (Al Gore) and 2004 (John Kerry), it made very few changes to its rules, whereas it saw large rule changes after the blowouts of 1972 (George McGovern) and 1984 (Walter Mondale). But the party also conducted substantial rewrites after the relatively close elections of 1968 (Hubert Humphrey) and 1988 (Mike Dukakis).

It’s possible that narrow defeats can affect a party’s internal evaluations in both directions. For some, it’s evidence that they’re picking good nominees and could have easily won the last election but for a few quirks. For others, a narrow loss (such as in 1968 or 2016) might suggest that a different candidate might have produced a different outcome, and that a different nomination procedure might have selected that better candidate.

What turns out to be a good predictor of the extent of party change is divisiveness in the last party nomination. There are a number of different ways to capture divisiveness, as Julia Azari has noted. None is perfect, but for a pretty simple measure, I’m using the share of the total primary vote received by the nominee. This ranges from the 2.4 percent Hubert Humphrey received in 1968 (he didn’t really compete in the primaries that year, which were basically optional at that point) to the 75.4 percent Al Gore received in 2000.

With the notable exception of 1988, the data points almost form a straight line, with more divisive primaries leading to more extensive rewrites of the party’s rules. Why is this the case?

A divisive primary means that a considerable number of people within the party didn’t support the nominee and probably took some time before rallying behind him or her, if that ever even happened. It’s one thing to have a lot of candidates appear in early debates or early contests with small electorates (like the Iowa caucuses or the New Hampshire primary), but if those divisions are persisting into the later contests, the party is having a hard time closing ranks. It suggests a legitimacy problem for the party’s nominee; in particularly divisive contests, many in the party think the nomination was improperly decided.

Where might the Democrats end up this year? Hillary Clinton got 55.2 percent of the primary vote, which suggests only a modestly consequential set of rule changes. But of course, that statistic doesn’t quite capture the level of divisiveness in the 2016 Democratic presidential process. Only a handful of candidates ran, making it relatively easy for Clinton to get to 50 percent, but her vote totals were still limited by a strong and lengthy challenge by Bernie Sanders.

Clinton was additionally met with a Russian-backed social media campaign that sought to deliberately erode her legitimacy in the eyes of Democratic voters. She may have had greater legitimacy than Hubert Humphrey, but not a lot more, and there are still rifts within the party over the fairness of that nomination process.

Democrats aren’t likely to completely toss aside their old rules. But they’re prepared to make some nontrivial changes to their party rules this year, possibly more than we’ve seen in three decades.

As Black Friday approaches, Amazon workers demand better labor conditions
Vox Sentences: The pope will listen to survivors
Game of Thrones’ Battle of Winterfell was less deadly than expected. Good.
Joe Biden’s foreign policy vision takes shape as he selects his team
Why this font is everywhere
“This is just my hunch”: Trump goes on Fox News and spreads misinformation about the coronavirus