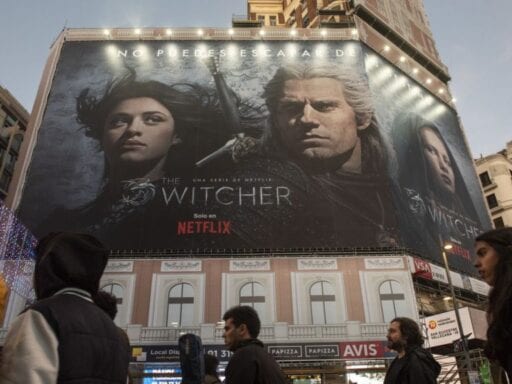 Share
Loading...
People walking by a billboard for Netflix’s The Witcher in Spain. | Budrul Chukrut/SOPA Images/LightRocket via Getty Images

Netflix has about 50 percent fewer titles than it used to but more awards nominations than ever.

There’s a lot less stuff on Netflix these days — and that’s not necessarily a bad thing. New data shows that Netflix’s library is way smaller than it used to be, but the streaming service’s latest successes with original content suggest that its years-old strategy to move away from licensing content could finally be paying off.

Netflix is facing a new level of competition with the recent launches of streaming services like Disney+ and Apple TV+, as well as HBO Max and Peacock coming this spring. However, Netflix has been anticipating this sort of thing for years and beefed up its spending on original content as a result. Now, hugely popular original shows like The Witcher and award-winning movies like The Irishman and Marriage Story serve as evidence that Netflix no longer needs a huge library to stand out from the crowd. (Indeed, huge libraries aren’t always all they’re cracked up to be, as Amazon Prime Video, which is nearly 10 times bigger than Netflix, shows.)

Ten years ago, Netflix had a total of 7,285 TV and movie titles in the US, according to streaming service search engine Reelgood. Now it has 5,838. That’s down nearly 50 percent from a peak of about 11,000 titles in 2012, according to Reelgood’s database, but up from 2018, when it had a low of 5,158. Netflix told Recode it doesn’t comment on third-party numbers.

The decline is part of a long-anticipated move by Netflix away from relying on other studios’ content and toward making its own. Netflix is making that transition as other content makers — namely Apple, Disney, NBC, and WarnerMedia — launch and grow their own streaming services. This influx of new services also coincides with Netflix paying higher and higher prices to license content, especially if it belongs to one of its new streaming competitors. Netflix could also be intentionally winnowing its selection as its vast troves of viewer data show it what people actually watch and what it can afford not to license.

For years, content companies were happy to make extra money by licensing their old TV shows and movies to Netflix. What they hadn’t anticipated was how popular those old titles could make Netflix and the titles themselves. There’s even a term, the Netflix Effect, for when making shows available on Netflix would breathe new life into the show or generate more interest in the first place (like how AMC’s Mad Men and Breaking Bad became much more popular after people found and binged them on the streaming site).

We’ve also seen how crazy-expensive popular series like this can be. Netflix spent $100 million to hold on to Friends for just one year. Now that Friends is exclusive to WarnerMedia, Netflix is free to spend that money on its own original content that viewers won’t be able to watch on another platform. Netflix isn’t completely moving away from licensing content: It recently spent more than $500 million for the 180-episode catalog of Seinfeld.

Still, Netflix now spends more than half its cash on originals, the company’s Chief Financial Officer Spencer Adam Neumann said on the latest earnings call. That’s up from nothing less than a decade ago.

“The future of our business is mostly originals,” Neumann said.

Producing original series and movies is usually much more expensive than licensing old content. That might explain why Netflix has generally dropped licensed titles faster than it gained new originals. But Netflix is betting it will be worth it in the long run as the company will own its content library and won’t have to negotiate increasingly expensive licensing deals. Meanwhile, if it can continue to produce shows with burgeoning fanbases with must-watch attitudes, Netflix stands to win and retain more subscribers. Executives on the call touted the success of recent originals like The Witcher, a fantasy series watched by a record 76 million people in its first week, as well as the company’s recent award nominations.

“It’s exciting that we end up with being the most nominated studio at the Oscars this year with our films, but the most exciting thing is those films are all incredibly popular with our members as well,” Chief Content Officer Ted Sarandos said.

Netflix CEO Reed Hastings sees vying for awards as a virtuous cycle. “So you’ll see that if we further our reputation for doing well for content — sorry, for talent — by being one of the best in the world at winning awards for our talent, then the business benefit is that we will win deals that we wouldn’t have otherwise won for incredibly entertaining content,” Hastings said.

Original TV series seem to be leading the charge. Since Netflix’s first original commission, House of Cards, debuted in 2013, the company has expanded the effort tremendously and now creates series in numerous genres and languages. Netflix has also cultivated massive franchises like Orange Is the New Black and Stranger Things. The streaming service has even picked up some transplants. Recently You, a show that premiered on Lifetime, released its latest season as a Netflix original, and Black Mirror, which used to be a British network show, had its fifth season on Netflix.

Netflix’s original TV shows have arguably been more successful than its movies, though that could be changing.

In 2017, Netflix hired producer Scott Stuber to lead its original film division and is spending hundreds of millions on big-budget films. The company is also seeing great success in creating material that draws awards consideration. Netflix received 24 Oscar nominations this year — more than any other media company. This also marks the first time a streaming company led Academy Award nominations. On top of that, two Netflix films, The Irishman and Marriage Story, have been nominated for Best Picture. Netflix also recently signed a long-term lease on Manhattan’s famed Paris Theater as a way to demonstrate its commitment to prestige filmmaking and qualify for even more awards.

However, as Netflix grows its library of originals, its library of non-Netflix content will continue to shrink. That might be bad news for fans of ’90s TV comedies. What really matters, though, is whether what’s left is worth watching.

It’s essential to understand why some health care workers are putting off vaccination
Trevor Noah’s feud with France over race, identity, and Africa — explained
Ballot selfies, state by state
Virginia’s election results are a big deal for the Equal Rights Amendment
How mutual aid groups are helping Texas
DC Metro criticized for how it handled white nationalists during Unite the Right